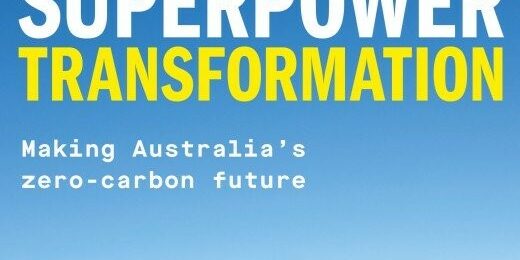 Super-Power explained that Australia could play a large, impactful, global role in supplying zero-emissions products. The eight chapters of The Superpower Transformation puts this thesis to the test, including Garnaut’s own contribution, “The Bridge to the Superpower”.

Garnaut posits three reasons why Australia needs to act. First, climate change is real and damaging. Second, Australian prosperity can be improved through creative initiatives and investment. Third, mitigation supports Australian security and international relations. In this book, he says: “Success as the Superpower of the low-carbon world economy can make a large contribution to restoring Australia after the stagnation of the Dog Days and the stress of the pandemic recession.”

Given that “Australia will lose its old exports of coal and gas at a pace determined by global progress towards net zero emissions” and because the country enjoys the richest per-capita endowment of wind and solar, it is essential to reset policy and action. Garnaut regretfully refers to Australia as a laggard, whose potential to lead in the quest to “support the restoration of our own prosperity after a decade of stagnation of living standards” is inextricably bound to global decarbonisation.

The challenge, though, is whether the rewards outweigh the risks, whether the complexities and “short-term” pain and disruption to current communities and interests, are worth the candle.

The authors rise to the challenges presented by Garnaut. Technical analysis threads through the essays and informs policy prescriptions in the Malte Meinshausen et. al. chapter. They discuss “The Diminishing Carbon Budget and Australia’s Contribution to Limit Climate Change.” Mike Sandiford, “The Net-Zero Opportunity for Australian Minerals” outlines a case you might not expect to find in a book like this a few years ago: the compatibility and complementarity of mineral extraction, processing, and green energy. Dylan McConnell’s “The Decarbonisation of Electricity” soberly assesses opportunity, pitfalls, and challenges. The largest technical challenge of the times, commercialising “Hydrogen”, or how green hydrogen could be a prime aid to decarbonisation, is presented by Frank Jotzo. One of the most compelling chapters for policy implications is Ligang Song’s “Decarbonising China’s Steel Industry” – which focuses on Australia’s potential role in achieving that aim. Isabelle Grant’s “Land Carbon” and Susannah Powell’s “The Renaissance of Rural and Regional Australia” canvass opportunities in agriculture, rural and regional industries.

Grant points out: “Approximately one-third of all global CO2 emissions since 1850 have come from loss of carbon in terrestrial ecosystems; most of the remainder from burning fossil fuels. Consequently, to limit global warming to 1.5°c, land carbon management and restoration is needed…” Indeed. Every topic tackled in this book is interrelated to the objective of decarbonisation.

Garnaut, relentlessly presents the case for capitalising on Australia’s opportunities. Five are highlighted: Abundant renewable energy resources; land suitable for growing biomass for zero-emissions and sequestering carbon; the world’s largest supply to international markets of minerals requiring large amounts of energy in processing; the legacy of knowledge, skills, institutions; as well as the infrastructure from the old resources industries.

Garnaut says the Coalition government (to 2022) mantra “technology not taxes” falsely suggested a dichotomy between market incentives for reducing emissions and the technologies through which they would be reduced.” He references the Great Australian Complacency, a theme of Garnaut’s earlier book Dog Days (2013), such that vested interests caused the destruction of carbon pricing policy. After “Nine Years of Kidding Ourselves” Garnaut looks back in The Superpower Transformation and tributes Gillard’s deft leadership which “led to crisp decisions on establishing carbon pricing, the Australian Renewable Energy Agency, the Clean Energy Finance Corporation, the Climate Change Authority and the Climate Council.” But then came the “Dog Days”. Now is an opportunity to reset.

Several of the more ambitious topics concern the commercialising of green hydrogen and the potential to smelt metals in Australia for export using green energy. The push to net zero is a game changer. New resource-processing industries are the opportunity.

Posed as the largest technical challenge of the times, commercialising ‘Hydrogen’, or how green hydrogen could be a prime aid to decarbonisation, is presented by Frank Jotzo. His chapter is informative and dispassionate. Hydrogen is produced by splitting water into oxygen and hydrogen with the input of electricity, in a process called electrolysis. But there are clean and dirtier ways of doing so.

Hydrogen is currently a tiny share of energy fuel. The reason? So much gets wasted in production, compression, storage, and conversion. Shipping hydrogen is expensive. Currently, the efficiency cost is 70%. Meaning that typically most of the energy is lost when not immediately used. But where “hydrogen from electrolysis is used as a fuel or feedstock, about two-thirds of the input energy is available.”

The climate credentials of hydrogen differ depending on the method of production – green, blue, grey, brown, or black. Electrolysis using renewable energy is green, “carbon-free electricity stored in molecular form.” Blue hydrogen uses gas but with carbon capture and storage to minimise emissions. But this is controversial, given efficiency losses. Where the process is fired by fossil fuels, the dynamics change: from gas, grey; from coal, either brown or black hydrogen.

The CO2 emissions “intensity of grey, black and brown hydrogen is around 74, 157, and 170 kg.CO2 per EJ of energy respectively, or around 9, 19 and 20kg.CO2 per kg of hydrogen.” In short, such fuel sources to create hydrogen fuel are out of the question in a world striving to limit carbon emissions.

Presently, Jotzo says that green hydrogen has median production costs of USD 3.00 – 4.00 per kg. In the decade, 2011-21, before 2022’s upsurge in costs, gas prices were on average in southeast Australia around AUD 6.00 per GJ. The opportunity relies on technical innovation and huge investment, including a massively expanded national grid network. Without the latter: “Grid connections of electrolysers present challenges for certification as ‘green’ energy.”

The aspirations sketched by Jotzo rely on water supply, progressive scientific gains in hydrogen processing, together with consideration of consequences and approvals, addressing environmental issues including biodiversity, and the respect, engagement with, and consent from first nations people on their land.

Industrial-scale green hydrogen is not only a possibility, but the economic opportunities for new industries are also vast. The main candidates are iron metal, steel, synthetic fuels, and fertiliser production.

Yet: “If all iron ore exported from Australia (in 2019) were processed in Australia, this would produce around 540 million tonnes of steel per year, requiring 2100 TWh [Terawatt-hours] of electricity per year to make 33 MT [metric tonnes] of hydrogen per year.” This is seven times Australia’s total energy generation in that year, a breath-taking number.

Yet if a domestic hydrogen industry were able to underpin a fraction of this, then “processing a quarter or half of Australian exports of iron ore into metal would build an immense industry.” “The single most important aspect is policies to penalise greenhouse gas emissions and incentivise the uptake of zero-emissions alternatives.”

This vast expansion of energy use potentially increases Australia’s exposure to CO2 emissions. This would require global assessment: “The question then is: would building the hydrogen industries that are needed for decarbonising the world economy, in another part of the world, impose greater or lesser local environmental damages than building them in Australia?”

One of the other most compelling chapters for policy implications is Ligang Song’s ‘Decarbonising China’s Steel Industry’ – which focuses on Australia’s potential role in achieving that aim. Her chapter accounts for opportunities with China’s steel smelting – which could also apply to Korean and Japanese steel production. In 2019 China accounted for 53% of global steel production. In that year, steel carbon dioxide emissions totalled 1574 million tonnes, 17.5% of the country’s total emissions.

Reducing China’s carbon footprint, and achieving net zero by 2050, requires changes in production and energy use. BHP’s and other analysis suggest that a significant step-up in the use of scrap iron and superior energy management should lead to a 40% reduction in emissions. The opportunity from Australia, however, could be greater: “Using Australian renewable electricity and hydrogen produced from renewables to convert that iron oxide into iron metal and steel would reduce global emissions by around 2 per cent – almost twice as much as Australia eliminating its own emissions.”

Although China’s economic growth is plateauing, and local steel production stabilising, urbanisation (now 64%) is projected to grow to 70% of the population. China’s Belt and Road initiatives, as well as further development – and extensions – of high-speed rail projects, means there is a long way to go before China’s appetite for steel declines.

Therefore, the superpower opportunity, at its most tantalising, is that Australia, on Garnaut’s figuring, could account for a 8% reduction in global CO2 output. Read the book to find out how.

Turning now to the editor of this collection, there are many Garnauts packed into one man’s lifetime: Asia (especially China) and PNG expert, consultant, company director, a professor of development economics at the Australian National University and now of economics at the University of Melbourne, economic adviser to Bob Hawke (and instrumental in the great reforms in the 1980s), Ambassador to China, author of Australia and the North-East Ascendency (1989), key architect in the formation of the Asia Pacific Economic Cooperation (APEC) forum, journal editor (including this one in the early 1990s). He is Australia’s most consequential economist.

Garnaut stands at the forefront of developing economic policy about climate change in Australia. This latest book is all of a piece, more optimistic, forthright, and direct about what to do. His 2008 review and 2011 supplementary report to government on climate, his prodding work with the Turnbull government (itself beset with Coalition tensions and disharmony), his writings over 15-years trace the evolution of perspective, policy goals, and burning ambition.

None of Garnaut’s prescriptions, or those of his co-authors, rely on starry optimism. The hard-nosed economist toolkit – cost-benefit analysis, tracking of consequences, including the unexpected, testing and refinement of hypotheses, calculating long-term and short-term impacts, critical use of analytical models, consideration of rational self-interest, problems associated with stranded assets, self-interest versus public interest, risk and uncertainty, business cycle analysis, data analytics research, the interactions between complex systems, the energy markets, trade, investment dynamics – keep hype and scepticism at bay. Technological innovations and investment are making renewable energy cheaper. This is intensifying. Skills in delivering big projects combined with sober estimates of project feasibility and delivery are key. Knowing where to start and why helps.

The practical, yet far-reaching vision of The Superpower Transformation allows, for once, that a carefully reckoned optimism could underpin the transformative decision-making required to place Australia at the heart of immense global action to combat climate change.

The version as published reads: