(2018) All Aboard: The Journey of High Speed Rail to Canberra 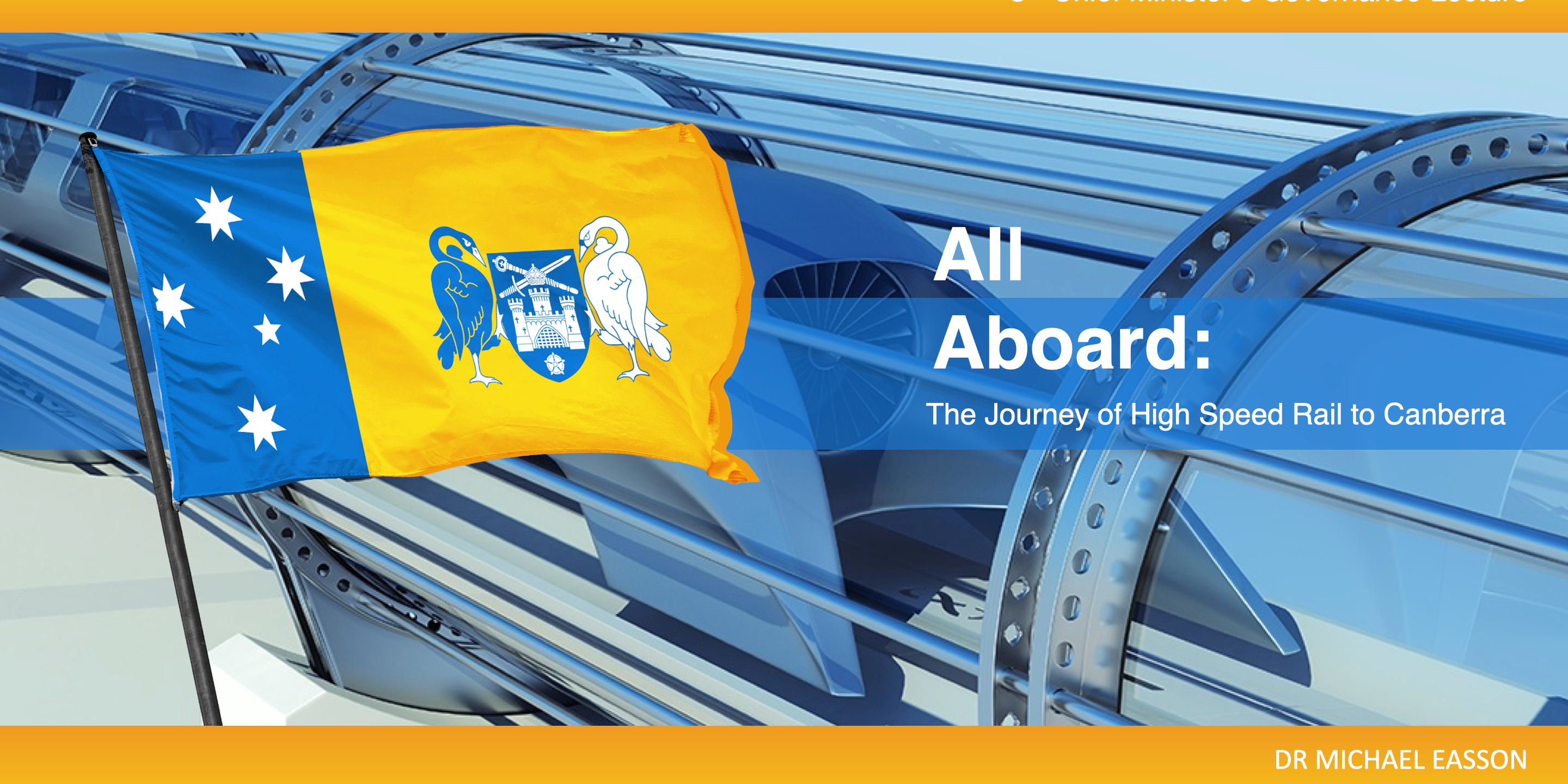 In late 2017, I accepted an invite to speak on a transport topic for the ACT Chief’s Minister’s annual governance lecture. As a recent appointment as Chair of the City Renewal Authority (Canberra) it appealed to be better known and appear before an audience of mostly Canberra public servants and those interested in sound public policy. I was inattentive to the flow of emails between my PA and the conference organisers. The latter had suggested the theme of transport projects and governance as a worthy theme. Perhaps they were familiar with my PhD dealing with that question. But that might invite debate on light rail in Canberra. Though I welcomed its introduction (it was under construction at the time; phase 1 was opened in April 2019), the project was too controversial an issue to dive into. I was not an expert and it would take too much time to ‘bone up’ on the detail. A suggestion came back about high speed rail to Canberra.

I tend to do a lot of research before I consider what to say. For my preparation, besides looking up reports and articles, I decided to go one step further: Catch a train to Canberra from Strathfield (in Sydney, where I live).

At my presentation, I told the saga of how I had got there that day.

I left it to the last week to prepare something, a very busy week as it turned out.  I only finished my notes for a powerpoint at midnight. 17 hours later at 5.00pm I was to speak. I posted my 20 pages of scribbles on the UpWork (www.upwork.com) website, requesting bids to turn it into a powerpoint within 7 hours, with USD200.00 as the price. I woke up at 5.00am the next morning and found just 4 bids: 2 from Bangladeshis, 1 Romanian, and 1 from The Ukraine. The latter stated that he had prepared powerpoints in English before. He was the only experienced ‘powerpointer’. A ‘no brainer’ – I went with him, flying blind and hoping for the best. I then walked to Strathfield station hoping to catch the train to Canberra that departed 20 minutes ago. I had last caught a train to Canberra 35 years before, which stopped at Strathfield. I discovered it did not stop here in 2019. No worries. Liverpool? No. I hopped onto a train to Campbelltown, but just missed my connection…  I spoke to the Station Master: “In 10 minutes get the Melbourne train.  Jump off at Yass. You are an hour from Canberra. There should be a bus. Or a taxi. Relax.” I boarded the train, and a cranky attendant demanded my ticket. I said I would pay on the spot. There was no wi-fi. I dined on a heated meat pie from the catering carriage. Outside as the train shifted through curves and bends, I saw many wooden sleepers on the side of the tracks, remembering that one of the articles I read mentioned that during the GFC the government spent about a billion dollars replacing wooden sleepers with cement ones. I thought if only the route was agreed, researched, surveyed, you might have sent trains to and from Sydney and Canberra, shaving an hour and a half from the 4.5/5hrs it currently takes.

I got off at Yass, walked out of the station to see if there was a taxi stand. Or bus stop. Nothing. I rang the taxi company. No answer. I asked the station master for assistance. She made a few calls and said there are only two taxis in Yass. One was already on the way to Canberra. The other did not want to leave locals stranded. She said if I could wait the hour and a half until she finished her shift, she would drive me – for $165.00 – “what it would cost you in a cab.” I accepted. What choice did I have? Meanwhile I was hoping on my mobile phone to spot an email with a first draft of the powerpoint. With intermittent connectivity on the iPhone, I tried to edit. Finally, we were off, in the car! I was dropped off to my hotel, in time to look at a new draft.  Miraculously, the quotes I had obtained from the transcript of episode 3 of the ABC television satirical show Utopia, on “the Emu Express”, matched photos of characters with their lines. The powerpoint was shaping up as very professional. Some suggestions were sent off and a few spelling mistakes highlighted. I showered, freshly pressed my suit, I downloaded the final product to my usb, and a sweaty hand held its contents. I walked to the hotel destination, then handed the Toshiba 8GB device to an assistant.  Introduction, lights, action! About 200 in the audience.

I told the story of my journey, explaining that if anyone was curious about the preponderance of yellow and blue colours in what they saw on the screen, they are the national colours of The Ukraine.