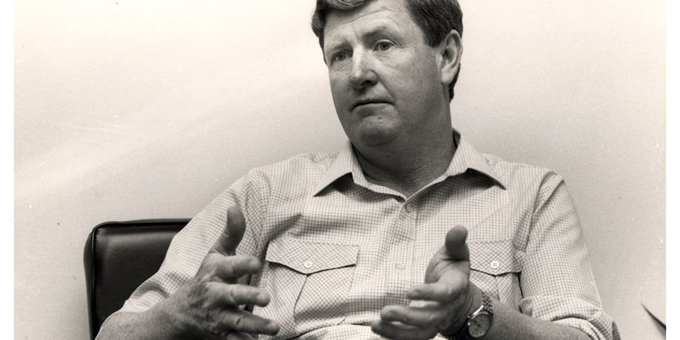 Published in edited form online then in print in The Sydney Morning Herald under the heading ‘Insightful Scholar had a Deep Understanding of Sydney’s Urban Dynamics’, 19 August 2021.

Maurie Daly, geographer, raconteur, family man, academic critic of urban planning follies, gained an international following for the clarity and insightfulness of his analysis of city and place.

Daly’s book Sydney Boom Sydney Bust (1982), written while he was Professor of Geography at the University of Sydney, is an unsurpassed, irreverent study of Sydney’s obsession with property speculation. One chapter, “Subdividers, Speculators and the Games People Play”, shows how precisely Daly understood Sydney and its dynamics – driving into the real heart of matters.

A natural sportsman, he surfed and ran, played cricket, squash, and golf, and inspired his brood on the arts and intrigues of many sports. Keen on rugby, in the stands and in his armchair, following the ups and downs of the Wallabies, Maurie knew the solution, if only they asked! Eclectic in his tastes, in 1996 he wrote the 100-year history of the Sydney Sports Club, long associated with numerous sports, from AFL to boxing, billiards to soccer.

Of Australian Irish Catholic stock, one of five children, Maurice (“Maurie”) Timothy Daly was born on 6 December 1939 in Penshurst in Sydney’s southern suburbs, to Patrick (wool classer, cobbler, blue collar worker), and Kathleen (née Hanrahan, housewife). Both parents, particularly Kate, valued education and were great proponents of their kids getting a good education.

Maurie attended Marist Brothers Kogarah, a high school which fostered his religious formation, his intellect, and love of sport, especially cricket. (School alumni included Ray Lindwall, one of Australia’s greatest ever fast bowlers). He played rugby league in a school that churned out many St George rugby league players during the golden age when the club won 11 premierships in a row.

Maurie joined the Marist Brothers Juniorate in Mittagong and was a resident in Dundas when he first started at the University of Sydney on a Commonwealth Scholarship. But aged 19/20, he left the novitiate.

Bob Debus, a former ABC journalist, NSW minister, and state MP from 1981 to 1988 and again from 1995 to 2007, as an undergraduate in 1961/62 studying geography at Sydney University knew Maurie, noticing his precocious curiosity, humility, and no-nonsense response to jargon and woolly thinking. Daly passed every undergraduate course in his BA (Hons.) with High Distinction, graduating with first class honours in geography, in three years (instead of the customary four). They remained friends all their lives.

In 1981, Debus as an ABC radio reporter, on the second Radio National ‘Background Briefing’ program ever broadcast, interviewed Daly about the ideas that were percolating into his forthcoming book. Daly was impressive, with his understanding of practical administration, earthy grasp of everyday local politics, and discernment of trends in economics.

Commitment to intellectual achievement was excelled by his attachment to family. Crossing the Harbour Bridge in 1962, meeting Elizabeth (“Liz”) Sullivan, a vivacious North Shore girl at a party at Mosman, the Penshurst boy was smitten; in 1963 there were engaged and the next year they married. Progressing studies and academic career, they raised three girls: Teresa, Lisa, and Jenny.

Straight after graduating, Daly moved to Newcastle, working with the Hunter Valley Research Foundation; he immediately commenced his PhD at the University of Sydney. On submission of his thesis in 1966, the couple moved to Ottawa, Canada, where Maurie was appointed Director of the Atlantic Provinces Economic Development program, afterwards returning to Australia in 1967 as a Lecturer in Geography at Macquarie University (Senior Lecturer, 1974/75) and to work on the Sydney Regional Plan. In 1976 he was Professor at the University of Sydney, from which he retired in 1994. In a busy life, he published numerous articles, monographs, and books on geography and urban planning and planners.

Characteristically, one essay began: “City planners often write and talk like C. Northcote Parkinson who, in the preface to Inlaws and Outlaws, suggested that: ‘in making success available for the first time to all, I have some claim to the gratitude of mankind’.” Maurie’s deadly wit exposed the absurdities of supposedly clever people.

Daly viewed Geography as the study of earth as the home of humans. He believed that in the need to find solutions to issues of environmental degradation and sustainability, population change and globalisation, the skills and knowledge of geographers would come to the forefront.

Students remember field trips to the Hunter Valley with him, to ponder the conflict between coal and agriculture.

On a Rockefeller Foundation grant, from 1972/73, Maurie and family were based at Nigeria’s University of Ibadan, home to independent thinkers (whose alumni would include 1986 Nobel Literature laureate Wole Soyinka — “A tiger doesn’t proclaim his tigritude, he pounces.”) Nigeria, independent from 1960, was wracked by ethnic and civil war. The plight of the starved and slaughtered Biafran minority was known in every Catholic parish in Australia, with the Biafrans assisted by Catholic relief charities.

Unexpectedly, Maurie evinced a degree of courage no Daly ever showed before. Army tanks and trucks sometimes patrolled the streets. At one point a student protest was quelled by government troops who randomly shot into university buildings where students and staff were sheltering. Maurie’s Nigerian colleagues begged him to stand out on the veranda in the belief that, if the army commanders saw a presumably important white man, they would stop firing. Daly inwardly queried his colleagues’ assumptions. But, ever the team player, he stood out there, and the soldiers ceased their fire, moving onto another building to again start blasting! After that experience, the Daly family decided to return to Australia, settling in Avalon and finally in Newport in 1996.

A successor as Professor of Geography at Sydney University, Bill Pritchard, said: “Maurie correctly foretold that when the Australian financial sector was deregulated (which it was, in 1983-84) the operation of global capital markets would see the agglomeration of financial services into Sydney’s CBD and thereby cause major shifts to the economic base of the city.”

In 1984 Daly was named inaugural Director of the Research Institute for Asia and the Pacific at the University. He extensively travelled throughout South-East Asia, writing with Mal Logan The Brittle Rim: Finance, Business and the Pacific Region (1989) and Reconstructing Asia: The Economic Miracle That Never Was, The Future That Is (1998) and associated studies.

One post-graduate student remembers that car-pooling with Maurie and other university colleagues in the mid-1980s, from Avalon to campus, was a chance to learn about all manner of things, Maurie in the front seat sometimes shuffling a bunch of overhead transparencies, selecting slides and disposing of others to construct a worthwhile lecture, all the while keeping up a lively chat about sport, politics, international flows of capital, drivers of property development in Sydney, and other topics of the day.

An article published in Quadrant on a visit Maurie made to the Soviet Union in 1988, is a gem of writing, in its acuteness of observation, and extrapolation from detection and academic research about the crumbling of a society he was witness to.

In 1989, Maurie invited the then-Minister for Defence, Kim Beazley, to speak on the geopolitics of East Asia. Student protesters staged a noisy blockade of the lecture venue, trapping all inside. University security eventually broke through the protesters’ cordon and upon seeing Maurie, the Head of Security quipped: “Daly, I knew it’d be you in the middle of this!”

Post-university, setting up Daly Research Systems, he continued researching and writing, adding to publications focused on the economics of urban, regional, and Asian development as well as the Sydney property market. He moved into the highly active and high-profile position as a member for 17 years (five as Chair) of the NSW Local Governments Grant Commission, the body which made recommendations to the Minister for Local Government on the allocation of general-purpose grants to local governing bodies in NSW. Daly led the Public Enquiries into Liverpool City Council, Tweed Shire Council and Warringah Council, writing tough assessments of their systems and practices which tolerated sloppy decision making, corruption, and mismanagement.

Maurie and Liz played a vibrant part in the lives of their three daughters. He loved watching their sport and debating. Maurie was president of the Parents & Friends for Mater Regina primary school, Avalon, and Mater Maria college, Warriewood. Maurie and Liz had many long term and dear friendships, often fuelled by memorable dinner parties or weekends at their property at Orange, made more raucous through the wit and storytelling skills of the hosts. They were subscribers to the Sydney Symphony Orchestra and regular attendees at the Nimrod and the Seymour Centre, fulfilling their shared love of theatre.

Towards the end, Maurie was researching a book on why every Sydney metropolitan plan over the past seventy years had missed its targets, and why.

Sydney Boom Sydney Bust (1982) explained the role of finance companies, subdividers, and speculators — all working in the context of the changing international capital market — in the distortion of the planning and housing policies of the city. It is still very relevant. At the end of the book, Maurie quotes the Choruses from T.S. Eliot’s The Rock:

When the Stranger says: “What is the meaning of this city?
Do you huddle close together because you love each other?”
What will you answer? “We all dwell together
To make money from each other”? or “This is a community”?

These were the questions he tried to answer all his life. One of Australia’s greatest urban scholars, his works continue to influence our society. Creating, curating, improving community life, recognising the centrality of people, was at the core of everything he stood for. It is why his contribution endures.

Maurie suffered illness in his last few years and passed away peacefully on 11 April 2021. He drew enormous comfort from the care, kindness, and attention Liz provided him over his last years and days and the love and ever presence of his family. He is survived by Liz, their three daughters and their partners, eight grandchildren, and one great grandchild.

When I submitted this, I added this caption which was not published with the article: Michael Easson, another Penshurst boy, knew Maurie Daly over the last 30 years of his life.

Liz Daly and the family helped by sending background material to enable me to write something interesting.

I posted an excerpt of the article on Linkedin. Professor Robert Freestone, Professor of Planning at the University of NSW posted this message:

Sad to hear this belated news. But a nice memoir, thank you Michael. I didn’t realise I shared the same boyhood connection to Penshurst with Maurie. He gave me my first academic job as a research assistant on a coastal erosion project but also wrote two strategic job references to help me on my way. His work on urban systems, quantitative methods and, later on, property & investment was seminal. His retirement from academic life was premature but a significant contribution to local government administrative practice followed. Grounded and personable, we’ve lost a good bloke.

Among other comments, Gregory Nell SC wrote: “A great story and obit … of someone I met several times many years ago now … not only at Sydney Uni but also the Sports Club and Grant Hotel. It was sad to hear of his passing earlier this year.” And there were many more.