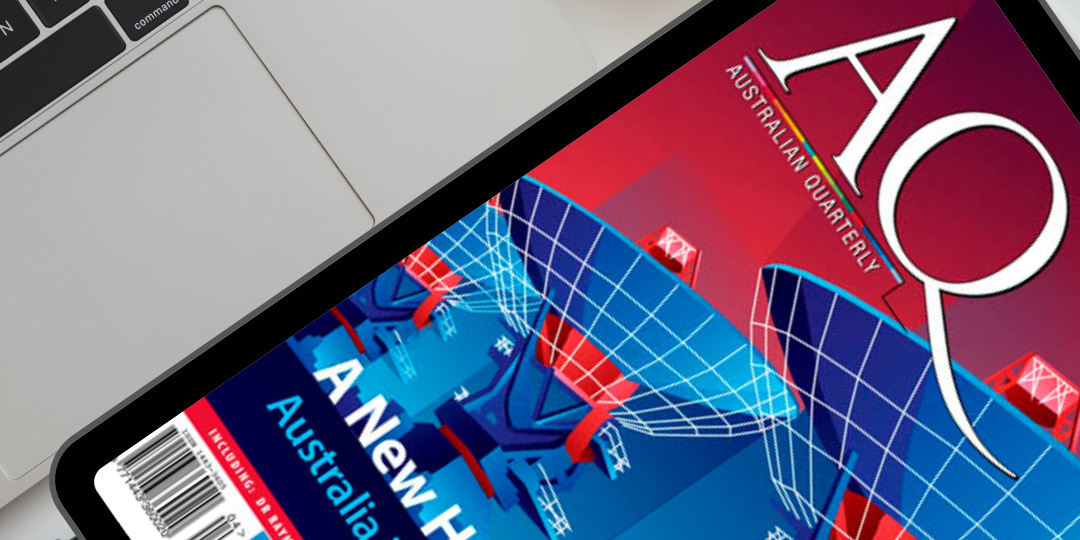 The Australian Institute of Political Science is pleased to announce the appointments of Professors Ross Garnaut and Nancy Viviani as 1992 editors of The Australian Quarterly. A new editorial committee will assist the editors.

In 1992 the journal will be more lively, in content and presentation. The new editorial team is conscious of the best traditions of AQ and the need to win new subscribers. The best way to win attention, confidence and trust – and subscriptions of readers – is to publish more that is interesting, critical and well argued.

Obviously, the AQ will continue to promote discussion and understanding of political, economic and social issues in Australia. As usual, the journal will espouse a non-party political approach. This summary, however, should not imply that the editorial team is afraid of argumentative and controversial perspectives on important issues. Articles of that kind, as well as learned expositions and criticisms of thos subjects usually covered in the AQ will be strongly encouraged.

In 1992 and beyond, a major theme will be explored in each issue. Those themes will add flavour to the various issues. Such an approach is not meant to exclude other articles extraneous to the theme of that issue of the journal. Anything original and good will be considered for publication.

More details about the direction of the AQ are explained in the next issue (the first for 1992).

The AIPS also farewells Dr. Hugh Pritchard, who has been editor or co-editor for eighteen years. Hugh intends to concentrate on his academic interests at the University of Technology, Sydney. The AIPS is grateful for the assistance rendered by Hugh and former editorial committee members in some of the most challenging years of the existence of The Australian Quarterly.

Dr Jack Best, a medical practitioner, come management consultant, had somehow came to be the leading, controlling figure in the Australian Institute of Political Science (AIPS). I learnt that Best and Janine Sargeant financially supported the AIPS through trying times in the 1980s and early 1990s, including providing the Institute with a physical home in at least three sites during their perambulations around the Balmain peninsula.

Around 1991 I was invited to join its Board. I was familiar with the AIPS’s glory days from the early 1930s to the late 1950s. The Institute produced The Australian Quarterly, which had been published from 1929, full of interesting articles on Australian politics and culture, and books on topics canvassed at annual summer schools. But in recent decades, the organisation had faded. So I thought it might be a forum worth reviving. The journal had been produced for many years cheaply in small almost unreadable type. So, perhaps, the skills developed in producing books for the Labor Council’s Lloyd Ross Forum and the Labor journal Labor Forum might be applicable here.

I advocated that the journal needed new blood, new editors, a new format, and an envigorated effort to reach a wider audience. I was appointed Chair of the AQ Editorial Committee and I asked Ross Garnaut to become editor and he suggested Nancy Viviani, whom I knew as an author of numerous works on immigration settlement, aid policy and Australian engagement with Asia, as co-editor. Everyone took on unpaid work to revitalise the journal.

I asked my colleague Tom Forrest, the Executive Officer at the Labor Council of NSW, to do the leg-work in getting the journal up to speed. With Jack’s financial help and moral backing the journal was transformed. Tom was appointed Acting Associate Editor for the first issue in 1992 and he engaged Pluto Press to assist in setting the style and look of the journal. Other members of the Editorial Committee, besides the new editors and myself, were initially Gavan Butler, Murray Goot, Antoinette Le Marchant, Janet Norgate, Kevin Rudd, and Gary Sturgess. The membership of the editorial committee fluctuated.  There was nothing unusual or vexed about any of those changes.

At the time Garnaut and Viviani were appointed I remember saying to Professor Stephen Fitzgerald that I was glad the journal was now in good hands. But he counselled me, after initially expressing surprise that the AQ was still being published, that sometimes journals have a shelf life, an important role in the public sphere, but if they have atrophied it might be best to let them die and, instead, create something new.

Highlights of the period of Garnaut’s and Viviani’s editorship include a special issue on Mabo (Summer 1993), a special issue on ‘What Makes a Good Economist’ (Autumn 1994 – which included an insightful, moving article by Heinz Arndt on ‘Kurt Singer: Wandering Jewish Scholar’, who spent some time in Australia during and a few years after World War II, whom Arndt knew.)  Garnaut and Viviani relinquished their editorship in mid 1994 (they had from the beginning only promised two years at the helm and had edited the journal for 1992, 1993, and the first two issues of 1994), with Damian Grace and Ian Marsh taking over as editors. I stood down from the Board in 1996. The journal was attracting a high calibre of contributors, it looked great, in easy to read formatting, with illustrations breaking up the text. I had left the Labor Council in mid-1994 and needed to be more commercially focused – a grand way of saying more attuned to making a living. I could not any more afford the time of regular treks to the AIPS Balmain offices. Besides, what difference was I now making? I could claim no credit for the content of the journal – the editors deserve that praise. But I felt that it was ‘mission accomplished’ in being a catalyst for change and seeing a transfer of editorship to good people.

One failure, though, was in not increasing the circulation of the journal. This was for many reasons. The journal had once been sold at newsagents, but publishing, circulation, and distribution costs had risen sharply and few newsagencies were now stocking the AQ.  Few references to the journal occurred in the mainstream media. Marketing was lacking. The journal was more interesting than for several decades, but its reach continued to fade, becoming a small subscriber – and university library – read publication.

The journal has since radically changed its character. In 2006 the AIPS was renamed the Australian Institute of Policy & Science and the journal is now focused on policy issues in the broad science and technology fields.

It appears that Best grew bored of the AQ in its new format and decided to remove the editors and change course.

In 1998 Best launched the Tall Poppy Campaign to mark the centenary of the birth of Sir Howard Florey, which eventually grew into a campaign to recognise and celebrate Australian intellectual and scientific excellence and to encourage younger Australians to follow in the footsteps of earlier, outstanding achievers. This led him to consider whether the journal might be refashioned.

Best was certainly a pioneer in medical research and in associated management and education. His achievements are lauded. In January 1998, he was made a Member of the Order of Australia (AM) for “service to the development of quality assurance in health care in Australia, particularly through the creation of the peer review resource centre and as foundation editor of the journal, Australian Clinical Review.”

In 2007, Best’s honorific was upgraded to an Officer in the Order of Australia (AO) for “service to medicine and to public health through support for strategic health research and policy development, and as a contributor to the development of rural and remote health services and medical education programs, particularly in Aboriginal and Torres Strait Island communities and regional Victoria.”

Nowadays, on its website, the AQ describes itself thus: “AQ has become Australia’s only magazine devoted to Australia’s scientific future, with a focus on the science policy that will shape the world we live in.”

The change is regrettable, as much as the attention given to science, technology, engineering and mathematics (STEM) – a vast and important niche – is applaudable.  But that stem did not require the lopping off of an alternate, rich tradition and the awkward appropriation of acronymns, symbols, and traditions. If the Tall Poppy Syndrome is a concept in which successful people get ‘cut down to size’ it seems that this is what happened with the old AIPS and the AQ, with the then editors, Damian Grace and Ian Marsh, given the boot in 1998. It is not that what is new is wrong – it is highly commendable – it just that the ditching of the old was unnecessary and caused a cultural loss.

But perhaps I am entirely wrong. If the journal could not pay its way and if government grants were limited to non-existent, there was only one likely outcome.

That is the Best defence. By re-orienting the organisation, attaching it to a university, rebadging its focus, even if cheekily transmogrifying its form, with the added bonus of claiming a pedigree stretching to 1929, at least something worthwhile survives.

I had moved on when all those choices were made. Without all the facts, I just do not know the right response and the alternatives to the route chosen.