(1998) Review of Designated Investments. A Proposal Submitted to the Minister for Immigration on Business Investment and Migration 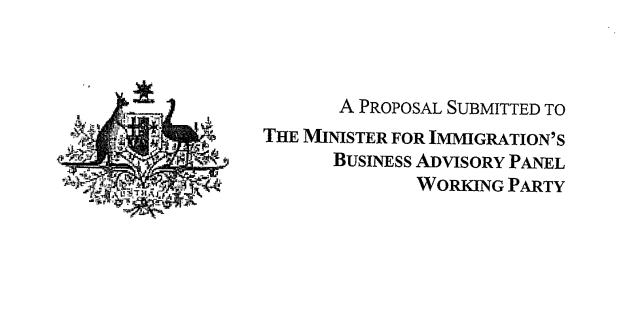 The Investment-Linked Sub-Class 131 visa requires successful applicants to make a “Designated Investment” of between $750,000 and $2,000,000 for three years with an approved issuing authority. This investment is intended to serve as a tangible sign of the migrants’ commitment to Australia in the short term and they are expected to engage in business in the longer term.

In the past twelve months, fresh applications from a number of traditional source countries – such as Taiwan and Hong Kong – have declined.

Macquarie Bank (“Macquarie”) believes that – with a few minor but important amendments – the performance of the program could be significantly improved, to the mutual benefit of migrants and Australia’s national interest. Macquarie proposes two key amendments.

Under our proposal, business migrants will be given the choice to nominate the proportion of their Designated Investment that they wish to have invested in government securities and listed infrastructure security respectively.

Anecdotal evidence also suggests that the requirement for migrants to demonstrate personal exertion in the accumulation of their Designated Investment is a difficult evidentiary burden to discharge and often works to discourage many bona fides applications. We propose that this requirement be relaxed, ensuring that Australia is competitive with alternative international business migration programs.

It is undoubtedly in Australia’s national interest for the country to be an attractive destination for quality, wealthy business migrants and their families. Macquarie’s proposal is designed to ensure that the program not only remains “user friendly” but continues to place Australia ahead of competing locations.

1.1  History of Business Migration in Australia

The current investment-linked migration program was introduced in April 1995, although business migration programs have required migrants to invest funds in Australia since 1981. However, in 1992 – following the release of a highly critical report by the Joint Parliamentary Public Accounts Committee on the previous business migration scheme – the Federal government temporarily froze the acceptance of fresh applications pending the introduction of the new guidelines.

Criticisms centred on whether appropriate tests were made regarding the probity of migrant funds amidst allegations of “loan-laundering” – i.e., claims that some business migrants were borrowing the funds required to establish the minimum net worth, effectively circumventing the spirit of the program.

The 1995 reforms attempted to address the above criticisms – valid or extreme as they may have been – by introducing an explicit investment-linked class of business migration while at the same time re-emphasising the need for business skills as an essential requirement of that class. The investor-linked class complemented the business investment and business executives categories of business skilled migrants. The reforms also introduced various tests, by way of declaration and production of evidence, to require investment-linked migrants to “prove” their economic bona fides.

Not surprisingly, the 1992 freeze dramatically impacted on the credibility of Australia’s business migration program leading to a noticeable decline in the number of applications in the 12 months following resumption. Although the number of applications has since recovered somewhat, it is questionable whether Australia is attracting as many quality high-net-wealth business migrants as it should.

To qualify under the current system, investment-linked migrants must establish:

The intention and effect of conditions 2-4 is apparently to ensure that the applicant is not merely an affluent person but also a person with considerable business experience and acumen.

Regulation 5.19A stipulates that ‘Designated Investments’ are to be limited to State and Territory government securities or securities which satisfy the following criteria:

1.4  Guidelines for Review of Designated Investments

The Business Advisory Panel (BAP) Working Party has been asked to review the range of Designated Investments with a view to examining the scope for an expansion of choices available to investment-linked migrants under Sub-Class 131.

Proposals for new Designated Investments will be evaluated in accordance with whether or not they have the capacity to:

At present, investment-linked migrants must – among other things – establish the following:

These criteria are designed not only to establish the bona fides of the applicant but also to ensure that the business migrants possesses business skills over and above any personal wealth that they may bring to Australia.

Macquarie agrees that probity is critical to the success and public acceptance of any business migration program but believes that the conditions’ insistence that each business migrant prove that he or she was personally responsible for the accumulation of the Designated Investment is an unnecessary and unduly cumbersome requirement.

In our opinion, if the business migrant is able to establish that he or she has the requisite net worth and has a bona fides involvement with a qualifying business or eligible investment, this ought to be sufficient for the purposes of Sub-Class 131.

Australia is the only country in the world that insists on a “source of wealth” test for business migrants. Business migrants – particularly Asian migrants – find this test complicated, patronising and insulting. Asian culture views such enquiries as implying impropriety and distrust. This test also adds greatly to the administration costs of the scheme, unduly delaying applications and further taxing the already-over-worked staff and resources of DIMA.

In making these observations, Macquarie wishes to emphasise that its views are not in any way critical of the highly-motivated personnel of DIMA, particularly its “business skills” staff. It is the rules that are in need of reform.

3.1  The Case for Investment Choice

Currently, investment-linked migrants are only permitted to invest in 3-year government securities.

It is difficult to argue with the previous review’s conclusion that “of all the investment types on offer, government securities provided the highest level of security of investment capital, the least potential for claims of government liability as a result of the migration process and a relatively simple and inexpensive administrative mechanism”.

However, Macquarie believes that restricting Designated Investments to government securities is an unduly extremist approach to achieving the government’s objectives. Indeed, the 1995 reforms were widely regarded as a first step in the pioneering of this investment-linked category.

The problems with the present approach are:

Macquarie recommends that the regulations be amended to allow for the following:

An Approved Issuing Authority so registered would then be responsible for making itself known to the various registered migration agents and will be required by law to:

The Infrastructure and Utilities Index is presently comprised of the following securities (listed exclusively on the ASX) – although at least 10 further securities are expected to list on the Index in the next 10 years:

Macquarie believes that our proposal represents a sensible incremental development of the program introduced in April 1995.

The proposal concords with the majority of the criteria stipulated by the Guidelines:

We believe the proposal has several key advantages for both Australia and its business migrants:

Public investment as % of GDP

The Industry Commission estimates that the Hilmer reforms will deliver a net economic gain to Australia in the order of 5% of GDP (or $25 billion). By contributing to the funds necessary to finance such a fundamental transition, migrants can be seen to be actively supporting Australia’s economic growth and prosperity.

Australia stands to benefit greatly from attracting high quality investment-linked business migrants. Our proposal is designed to enhance this prospect.

This was the first significant project that my future business partner, Adam Geha (then with Macquarie Bank) & I worked on.