(1999) The Man Who Made the Labor Government 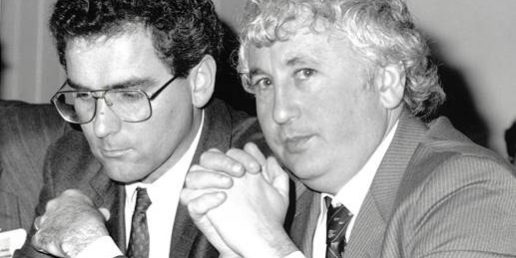 As a union colleague for 17 years, I observed his development, mostly from a distance and from the bias of an organisation, the Labor Council of NSW, which has had an ambivalent attitude to the ACTU.

A story about that was told by Bede Nairn, the historian and author of the book Civilising Capitalism. Nairn once interviewed in the late 1930s Jock Garden, a former Secretary of the Labor Council of NSW and advocate of forming the ACTU. As it was largely an idea that was pushed from NSW, Nairn asked why did he allow the ACTU to be located in Melbourne instead of Sydney? Garden replied: “It was like this. We thought if it had turned out to be a failure we could blame it on the location in Melbourne.  If it turned out to be successful it might eclipse our influence.”

Bill Kelty’s resignation as head of the ACTU is no great surprise. For a while there have been rumours of his impending departure. He has taken more of a background role and has faded from public view. There will be some in the union movement who will react to his departure with glee, many more will reflect on what has been an outstanding career.

Bill Kelty entered the union movement after completing a degree at LaTrobe University in Economics. He had little interest in the factional and warring campus politics which, in his time, was a hot bed of malice and crazy Maoist ideologues.

He went to university with Garry Weaven, a life-time friend and colleague. He entered the Storeman and Packers Union, rising as a leading research officer during the period in the 1970s when that union was at the forefront of industrial and organisational change. Leaders such as Bill Landeryou and later, Simon Crean, were both colleagues and patrons.

He was spotted by Bob Hawke, who recruited him into the ACTU and the rest is history. Kelty’s most significant role was during the Accord era when the ACTU was heavily relied on by the Hawke/Keating governments to drive economic reform. Kelty became the Secretary (head of) the ACTU on the eve of the election of that government. Although not close to Keating at all at the beginning of that administration, Kelty along with most other union leaders became captivated and convinced by his advocacy of economic reform. Kelty played a major role in securing the success of the Labor governments, particularly in the first four years of its administration. In retrospect they were the golden days for the ACTU and for Labor.

Contemporary internal critics are more critical than they were at the time on a number of reforms such as the amalgamation of unions and the creation of super unions. Several critics have particularly highlighted the Accord becoming ossified and a significant hindrance to the development of more flexible new industrial relations structures. Nonetheless, those critics underscore the kind of movement that Kelty inherited. Indeed he should go down in history as one of the great reformers of the labour movement and therefore one of its true heroes.

Such a view is not inconsistent with a critical perspective of the union amalgamations strategy and other initiatives that were adopted in the later part of the Hawke/Keating government.

Kelty’s greatest achievement was to consolidate on the initiative developed by his most significant early mentor Bob Hawke, in defusing some of the mindless factionalism of the trade union movement. Ironically, one of the union movement’s greatest critics of Kelty, Michael Costa, the secretary of the Labor Council of New South Wales, arguably has more things in common with Kelty than otherwise.

Both are driven by a keen interest in markets including reforming labour, product and service markets; both are romantics; both passionately believe in the central role of unions in developing a fairer society; both detest mindless factionalism and cronyism. The tactics, the pace of regulation, the shift to enterprise negotiations led sometimes to vexed choices. On the tactics there were big debates and big issues. Kelty’s strategies for dealing with union decline were controversial – otherwise, why bother? There is some merit in the idea of George Bernard Shaw: “nothing has been achieved by the reasonable man”. Sometimes bluster, sometimes charm, sometimes anger would be employed to get results.  Industry superannuation, decent redundancy, in short, a fair go in the labour market, were the big issues he fought for. One thing about Kelty’s long career, full of promise, battles, the rage of changing the world, is that he has usually unfailingly conducted himself with great character. He despised those who used the press to bag someone. Kelty always preferred to be direct in criticising someone to their face.

If the labour movement looks weaker at the end of his tenure than when he arrived, that is an unfair measure of judging the performance. The true, unknown criteria is what would the movement have been like otherwise?  The transition has attracted critics – an incompatible alliance of what might be called industrial relations Hansonites, Peronista-like protectionists, and super free labour market reformers.

Dealing with that mob was not easy.  If it looked effortless, as it sometime appeared in the 1980s, it was due to Kelty’s drive, political skills and brilliance in debate. In looking back at this life, not yet fully lived, Australia is stronger and more prosperous. Who else has contributed as much?

I could never get close to Kelty. One reason was that I found it extremely hard to hear him. I am partly (in truth, severely) hearing impaired.  He tended to mumble.  Lip-reading was awkward. Chats over the phone, impossible. I am not being patronising in saying this. I regret the loss of understanding him better.

I understood his quest for union amalgamations, understandable in the context of the metal industry, beset with numerous demarcation disputes, and the building industry, where rival unions fought for years over membership, complicating and adding to the costs of construction. The Labor Council of NSW feared that the “reforms” could potentially weaken the whole movement. Not everything should be viewed through the prism of a metal shop. The principal of subsidiarity was a consideration for me. Organisations like the Commonwealth Bank Officers Association (CBOA) used to cover everyone, from top to bottom. Even the very conservative David Murray, the CEO from 1992 to 2005, was a CBOA member for most of his working life with the bank. Yet in “industrialising” that industry, in eventually merging into the Financial Sector Union (FSU), swathes of management were excluded from union coverage. Other guild-like union organisations, such as the Australian Journalists’ Association in merging into the Media, Entertainment and Arts’ Alliance, similarly lost coverage. As Patricia Staunton, NSW Nurses Association Secretary once pithily put matters: “Bill, being a member of conglomerate union No. 8, doesn’t cut it for most people.”

Kelty’s sincerity could not, however, be doubted.

My article wanted to pay tribute to someone who did more than anyone outside of Hawke & Keating in the development of initiative and the fostering of good reforms in the glory days of Labor administration. Medicare and compulsory superannuation bear his imprint.