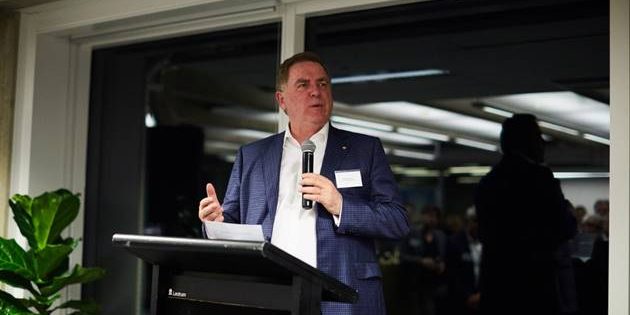 Notes for a speech on 23 August 2018 at the opening of the Fender Kastalidis office in Sydney, 259 George Street, Sydney.

Karl, Nonda, and Rob, thank you for inviting me.

It is great to be present in an oasis of conviction, creativity, contemplation, and energy – the opening of a new Fender Kastalidis office in Sydney.

The people in this room are creators of the new Australia.

Not that anyone here holds a completely free hand. We are not separated from the real world. We are buffered by it, but we are not shell shocked, weakened, or frightened of what is outside.

I first learnt about Fender Kastalidis in the mid-1990s through seeing the Melbourne Terrace buildings, a set of 60 apartments at the corner of Franklin, Queen, and La Trobe streets. A signature Salvadore Dali-like sculpture by Peter Corlett is at the entrance of each building, named Equus, Mondo, Roma, and Fortuna.

Few architectural companies globally can say that they created four of the defining, interesting, imaginative buildings in the major population centres in their home country.

The museum of old and new art (MONA) in Hobart, a sentinel overlooking the Derwent River, now gives a compelling answer to the question: “Why visit Tasmania?”

The Eureka Tower in Melbourne, with its gold and red clip top, is now a Melbourne postcard landmark.

The buildings in the New Acton precinct, Canberra, are the best example of urban renewal in Australia.

The Newcastle Herald building, the colours of the new, the integration with heritage, stands out as the best recent development in that city.

One interesting thing about this firm is ambition. In Robin Boyd’s The Australian Ugliness (1960) he wrote about the then timid inspiration of Australian architecture:

The trouble is that the boxes still have pretensions. They even introduce sometimes a cautious, unoffending mural to try to improve they have a soul. If they were honest with themselves, the boxes would admit that emotional expression was the last consideration at the time of their conception.

In contrast, Fender Kastalidis history, achievement, insistence on design excellence, illustrates what Peter Zumthor in Thinking Architecture (1998; 2006) wrote: “…details when they are successful, are not mere decoration. They do not distract or entertain.  They lead to an understanding of the whole of which they are an inherent part.” That is true of what I know.

Another example is the Garangula Gallery located near Harden in outback NSW, housing an extensive collection of Aboriginal art from the region. Just as each painting tells a story, so too does the building though the use of crafted, recycled, and locally sourced materials. Artwork is embedded in the architecture and interior design.

The thing sits quietly in the landscape saving its stories for those who wish to go on the journey. The building leads to an understanding of the whole of which it is an inherent part.

In Norman Shaw’s famous, clumsily titled essay “That an Artist is Not Necessarily Unpractical”, in Architecture. A Profession or an Art (1892), he wrote: “The building must be beautiful, it must be convenient, it must be well built, and this with strict regard to the expenditure contemplated by the projectors.”  That is a reminder that all buildings are products of partnerships, alliances of funders, builders, dreamers.

Musing on the Peter Finlan Lalor monument in Ballarat, Mark Twain remarked of this tribute to the leader of the miners’ revolt, the Eureka Stocade of 1954 (who later became a MP in the Victorian parliament): “…small in size, but great politically… a strike for liberty, a struggle for principle.”  That is one interesting example.

Which is one way of sneakily, further reflecting on the Eureka Tower. Its asymmetric shoulders, to borrow from your website, provide orthogonal counterpoints to the bold angularity, recesses and rakes of the building’s towering, gold crowned centrepiece, its significant public observatory at its peak which reveals previously unseen aspects of the city, it has become a magnet for Melburnians and tourists alike.

The Queen Bee Richard Stringer sculpture completes the picture. The building is a reminder of Victoria’s history. “Eureka” is also an interjection used to celebrate achievement, the exclamation attributed to the ancient Greek mathematician and inventor Archimedes. No wonder Nonda liked the name.

The structure has soul; it leads to an understanding of a unique part of Australia.

The timber screened east façade of the Nishi building in New Acton recalls the landscape vision of the Griffins and the natural environment in and surrounding Canberra.

MONA in Hobart is best arrived by ferry, the journey so far from the Stygian crossing one might anticipate on the way to a place fascinated by sex and death. The amazing structure, cleft through bedrock, cascading flights of rock hewn stairs, the disorienting features, is a perfect introduction to the surprise and delight of the artworks within.

The Fender Kastalidis studio relies on dedicated and talented staff. Individual growth requires curating of talent and excellent leadership. From what I see, that is here tonight – soul with ambition.

And let’s make a declaration: What Sydney lacks, Fender Kastalidis can make up for.

The general rule when speaking at the opening of an architecture firm’s office is the same as what Disraeli once said of Queen Victoria: “Everyone likes flattery; and when you come to Royalty you should lay it on with a trowel.” In this case, the exuberance was well deserved.  Fender Kastalidis a firm I have long admired.