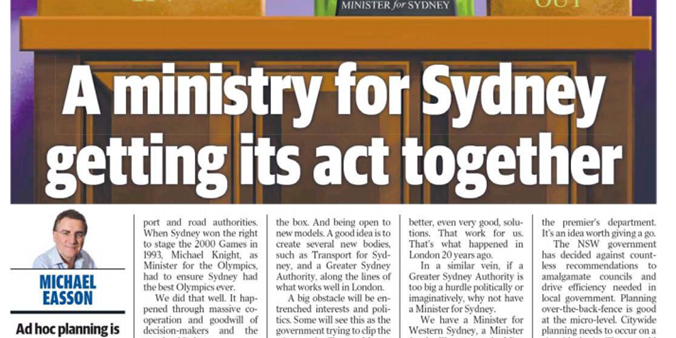 It is an idea that keeps crying for a receptive ear.

Bandied around from time to time is whether NSW should have a Minister for Sydney.

Twenty years ago we almost did. Bruce Baird was Minister for Sydney’s Olympic Bid, 1990-93. He co-ordinated with a myriad of Councils, including the City of Sydney and various government agencies, including the transport and road authorities.

On 23 September 1993 Olympic head Juan Antonio Samaranch announced “Syd-er-ney” was the winning host of the 2000 Games.

Michael Knight as Minister for the Olympics had to ensure Sydney had the best Olympics ever. We did that well. It happened through massive co-operation and good will of decision makers and the people of Sydney.

Both examples show that where there is a clear objective, Sydneysiders co-operate to get things done. They are bi-partisan examples of all sides working sensibly and together.

Outside of clear objectives, however, Sydney sometimes can be a mess.

The failure to get urban planning and transport right is an example of business as usual.

No one is saying there should be one person calling the shots. A Putin for Sydney is not the answer.

But you can be democratic, consultative and results-oriented all at once.

It means thinking out of the box. And being open to new models.

A good idea [discussed in my earlier article] is to create several new bodies, such as Transport for Sydney, and a Greater Sydney Authority, along the lines of what works well in London.

A big obstacle will be entrenched interests and politics.

Some will see this as the government trying to clip the wings of Clover Moore.

Complaints will be uttered about another messy solution that might take years to bed down. Others might worry whether a Greater Sydney Authority will rival the NSW government for power and prestige.

If we set up anything with no funding basis, unclear objectives, and poor accountability, we have only added to the problem.

What we really need to do is to think harder about why the Olympics worked.  Recover that spirit. Learn and apply the lessons from that time.

One thing is certain. We need the debate.

From that might come better, even very good, solutions. That work for us. That is what happened in London twenty years ago.

There’s a Crosby, Stills & Nash song: “If you can’t be with the one you love, love the one you’re with.”

In a similar vein, if a Greater Sydney Authority is too big a hurdle politically or imaginatively, why not have a Minister for Sydney.

Effectively, those Ministers play a role within government to focus their colleagues on the impact of their decisions in those regions.

It’s like the American concept of a lead independent director. There, many of the major Boards have a director particularly focused on the shareholders’ interest. Of course all directors should be interested in that. But the idea really forces the “Lead” to drive home the issues with other directors and management “what about the investors?”, “how are they any better off?”

A Minister for Sydney could play a similar role.

If such a Ministry means all things to all people, nothing much will happen.

I suggest that a Minister for Sydney should concentrate on three or four emerging projects each year, thereby galvanising Sydney to get our act together.

Such a Minister might have a Budget and second people to his Agency which, for sound operational reasons, should operate out of the Premier’s Department.

It’s an idea worth giving a go.

The NSW government has decided against countless recommendations to amalgamate Councils and drive efficiency needed in local government.

Planning over-the-back-fence is good at the micro-level. Citywide planning needs to occur on a citywide basis.

There could be interactivity, secondment and a lot of interchange between Councils and a Ministry for Sydney.

That’s because this Minister, the agency formed around it, is aimed at making Sydney better.

I am sure the City of Sydney has a lot of able people able to assist. As does Parramatta, Bankstown and many other Councils.

If you cannot have the ideal model of Sydney, if that is a too big a first step, then at least do better. Learn to love the Ministry of Sydney.

This was meant to be one of a series; but I found the editor of “Tele” unpredictable to deal with, and therefore it was uncertain what might be published.

In an accompanying article to what I wrote, in the same issue of the paper, John Lehmann, “Three Thousand State Public Servant Jobs Moving to the West”, Daily Telegraph, 21 March 2014, Steven Lowy and Lucy Turnbull were quoted in calling on the O’Farrell government to create the new position (of a Minister for Sydney) and saying they agreed with my idea.

This article led to radio interviews and a flurry of follow up commentary in the press sympathetic to the idea.

Below, an interview with Sydney radio station 2UE: