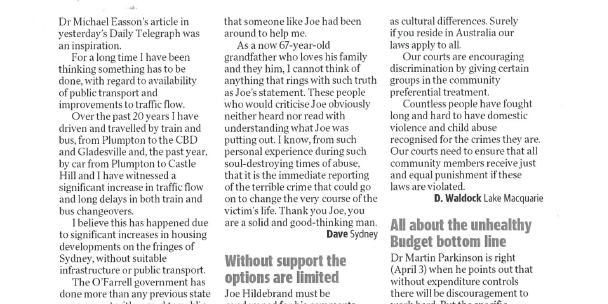 Whether it be a clogged M5, crowded trains, poor to non-existent public transport in most of western Sydney, and hopelessly congested traffic at airports, we’ve got it wrong.

There is a crying need for better transport co-ordination and planning to get it right.

Sydney is falling behind. We need a new focus – like London’s Greater London Authority and the brilliantly organised Transport for London authority.

We need something similar for Sydney.

To give him his due, Premier Barry O’Farrell’s public transport projects – light rail in the inner city and the north-west rail link – suggest he is keen to avoid the last government’s stop-start project announcements under Iemma, Rees and Kenneally.

But there are big questions about O’Farrell’s priorities.

There are many bottleneck projects and smaller upgrades in the high tens of millions that can significantly improve the lives of Sydneysiders.

Not every project needs to be a billion dollar mega project.

Getting transport right is one of the huge hurdles for any world class city.

Melbourne’s trams and transport network are not as brilliant as people think they are. Brisbane, with one large capital city only, seems to be getting its act together more than Sydney.

Sydney can do better. We are the best city in Australia. But we are slipping backwards. Time to get our act together. Time is of the essence for Australia’s most important city.

What we need are bodies with expertise, more drive at the top and political leadership. But to work effectively, we need bi-partisan approaches to transport and urban planning, thinking on a citywide and statewide basis. All politics might be local. But with transport, only the bigger picture works. How can one part of a suburb be transport-planned without due consideration to adjoining suburbs? It can’t.

The simple proposition should be a better transport network for Sydney is good for employment, liveability – and dramatically reduce pollution.

So the task is how to get there.

Transport for London was created in 2000 to be the integrated body responsible for London’s transport system. They develop and implement transport across the city, including managing transport across the Capital. Those services include: London’s buses, London Underground, Docklands Light Railway (DLR), London Overground, Tramlink, London River Services, and Victoria Coach Station.

Other responsibilities include: managing the Congestion Charge; maintaining 580km of main roads and all of London’s traffic lights; regulating the city’s taxis and private hire trade; making London’s transport more accessible through coordinating schemes for people with impaired mobility and running Dial-a-Ride alongside the London boroughs; taxicard scheme; promoting a range of walking and cycling initiatives.

It is a huge job. But it seems to work. Billions of pounds are spent each year improving the system. And huge projects are underway – such as Crossrail linking east & west London.

In London, there’s a lot of consultation and the focus is results driven. But in essence the exercise needs to focus on putting more density and functional amenity near buses and trains so people are dissuaded from using the car.

That is how it works in cities like Tokyo, London and Rome.  And it succeeds.

Significantly, this model rejects the NSW model of planners and operators in different silos.

For this to work in Sydney, a Transport for Sydney Authority would need to operate in a very different political environment.

Sydney would need to think and act on as a city of international stature, on a city-wide basis, not on a city-of-villages parochial scale.

Some people will scoff that this is anti-Clover Moore, or complicated or too hard.

Certainly changes will have to be made as to how Sydney and its 40 local councils operate now both individually and in their relationship with state government. In London, there’s one Mayor and thirty-two principal subdivisions called Boroughs. So there’s no central dictatorship. Boris Johnson is the Mayor of London in ways that Clover Moore is not the Mayor of Sydney.

This proposal works there, it should be within our wits in Sydney. We are a global city and we need to think and plan like one. That is imperative.

An alternative idea, that might operate either alongside of or instead of this, is a Minister for Sydney.

Originally, the last sentence read:  “Our next article will address that topic.” Instead, the order of the articles was reversed, with this as the follow-up article to what was published on 21 March 2014.