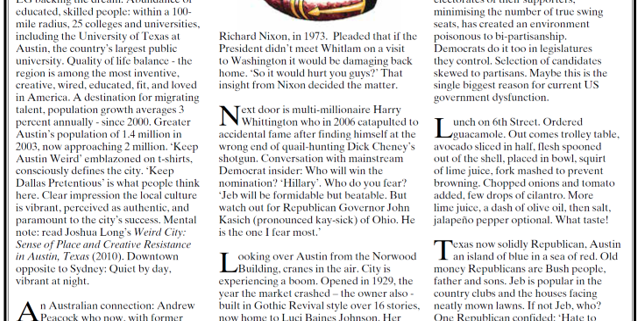 Published in The Spectator Australia, 25 July 2015.

Visiting accountant turned property investor Kate Braybrook and building tradie husband Mark, who have relocated from Melbourne. Looked at 20 growing US cities before picking Austin, capital of Texas. “It’s the lifestyle”. They locate, fix, and flip affordable properties across the city and recently bought an apartment block (multi-family living, as they say). Dreaming of building something high quality in a few years. EG backing the dream.

Abundance of educated, skilled people:  within a 100-mile radius, 25 colleges and universities, including the University of Texas at Austin, the country’s largest public university. Quality of life balance – the region is among the most inventive, creative, wired, educated, fit, and loved in America. A destination for migrating talent, population growth averages 3 percent annually – since 2000. Greater Austin’s population of 1.4 million in 2003, now approaching 2 million.

An Australian connection:  Andrew Peacock who now, with former US Ambassador Penne Percy Korth Peacock, lives in a home overlooking the Colorado River looking today as swollen as full tide of Sydney Harbour. It is dammed – literally. My host counselled that this Colorado – which flows from West Texas to the Gulf Coast – should not be confused with the river of the same name that passes through the Grand Canyon through to the parched almond fields of California.

Asked about biggest achievements? “Getting PNG independence.” Friendships across the aisle? “Lionel Murphy. Long story. Very different.” Before marrying Ingrid in 1969 in Hong Kong, Murphy asked about Peacock being best man. Thought better of it. “Would ruin two careers.”

Recalled meeting Spiro Agnew, then Richard Nixon, in 1973. Pleaded that if the President didn’t meet Whitlam on a visit to Washington it would be damaging back home. “So it would hurt you guys?” That insight from Nixon decided the matter.

Next door is multi-millionaire Harry Whittington who in 2006 catapulted to accidental fame after finding himself at the wrong end of quail-hunting Dick Cheney’s shotgun.

Conversation with mainstream Democrat insider: Who will win the nomination? “Hilary”. Who do you fear? “Jeb will be formidable but beatable. But watch out for Republican Governor John Kasich (pronounced kay-sick) of Ohio. He is the one I fear most.”

Looking over Austin from the Norwood Building, cranes in the air. City is experiencing a boom. Opened in 1929, the year the market crashed – the owner also – built in Gothic Revival style over 16 stories, now home to Luci Baines Johnson. Her mother, Lady Bird, called the building the most beautiful in Austin. “We used to call it ‘frozen music’,” is her quote. Right.

Closing time at the LBJ Presidential Library. Some days Robert Caro, finishing volume 5 of his LBJ biography can be spotted riding the elevator from the reading room to the lobby. No luck today.

An Australian thought: the President’s 1964 re-election slogan was ‘All the Way with LBJ’. Harold Holt’s oft-quoted repetition of this line in 1966 was no slavish statement of fidelity, although in Australia it is almost always mentioned as if it was. Holt was being witty – or trying to be. Did he deserve to be haunted by loose language or has something relatively innocent been burdened with misinterpretation?

An insight: redistricting of electoral boundaries where the majority party effectively quarantines the minority party into highly concentrated electorates of their supporters, minimising the number of true swing seats, has created an environment poisonous to bi-partisanship. Democrats do it too in legislatures they control. Selection of candidates skewed to partisans. Maybe this is the single biggest reason for current US government dysfunction.

Millennials move to where the action is. Hearing a lot of people from Houston and Dallas saying they feel at home. “After I left university at Austin, I didn’t want to go back”.

Texas now solidly Republican, Austin an island of blue in a sea of red. Old money Republicans are Bush people, father and sons. Jeb is popular in the country clubs and the houses facing neatly mown lawns. If not Jeb, who? One Republican confided: “Hate to say so but if he runs Kasich could win the nomination. He is mainstream.” That name again. From a swing State, of Czech and Croatian heritage, son of a mailman, from a blue-collar neighbourhood, former nine-term Congressman, governor of Ohio since 2010, Kasich sounds formidable.

The ‘Live Music Capital of the World’, Willie Nelson’s 4th of July weekend country/folk concert is in its 42nd year. Instead, headed to the Elephant Bar on 315 Congress Avenue, Gaila Kenneally and band performing. Her voice blends folksy jazz with Blossom Dearie nuance and Renée Geyer-like sultriness. Hours pass with Sentimental Journey, Lullaby of Birdland, It Had To Be You, The Very Thought of You.

The Spectator often features one-off or irregular individual Diaries that provide glimpses of the lives the authors lead. On this trip, a few days in, I was asked to write something by Rowan Dean, editor of the Spectator Ausralia. It made me see the journey differently – how to “explain” Austin to an imaginary someone not terribly curious – was the challenge. Luckily, a few of the people met were interesting and Austin has this vibrancy and musicality (so much is open even on a Monday night), that it is understandable why people want to live there.

I asked Andrew Peacock, whom I had already seen before being asked to write something, whether I could mention an aspect of our conversation. I did not want him to think I was deliberating coaxing him to tell me anything indiscrete that I might later tittle tattle about. We agreed on what might be said about Murphy.

Months later I saw John Howard. I mentioned Peacock and I asked him whom his former colleague would have been closest to on the Labor side. He thought for a whole minute, as if he was drawing on the deepest recess of memory. Finally he said “Murphy”. I asked how he knew.

Howard was Leader of the Opposition in 1986 when Murphy died. He decided not to say anything harsh or ungracious. But he had no time for him either. “He once said he stood against the whole Judeo-Christian ethic or words to that effect”. So Howard’s comments were measured, polite of the “Lionel Murphy had a very long public career.  He occupied many positions in his chosen political party” kind. I looked up Peacock’s condolence speech in the House of Representatives, a masterpiece of eloquence and passion: “To the end we had differences of view. There have been no other men on the other side of politics who have so persuaded me to certain views and the correctness of their ways in a number of instances.” What I found extraordinary, when I asked my question to Howard, that he could dip into the memory cells and produce an insight drawn from a recollection 29 years old. But, perhaps, if you heard what Peacock said that day, it would have been burnt to memory.