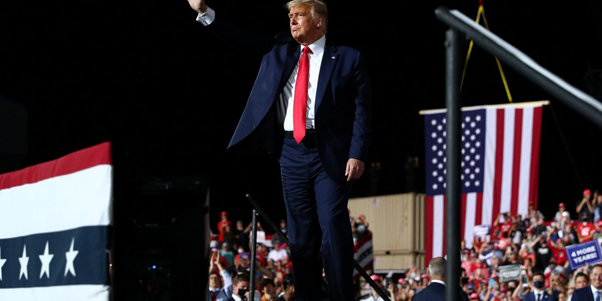 Published online on 25 October 2020 by The National Interest magazine, https://nationalinterest.org/feature/joseph-schumpeter’s-economic-warning-and-donald-trump-171186

For seventy-five years, 1942–2017, Joseph Schumpeter’s fearful warning to Americans about the messy breakdown of capitalism and the political order fell short.

The Austrian exile, American-based economist Schumpeter articulated his thinking in Capitalism, Socialism, and Democracy (1942), published in the same year his famous, outcast countryman, the writer Stefan Zweig, committed suicide “after the world of my own language sank and was lost to me and my spiritual homeland, Europe, destroyed itself,” as the latter bleakly concluded.

Schumpeter’s thesis is this: Capitalism gradually consumes itself. Capitalism’s successes lead to elites striving to protect their gains through cronyism, such that large monopolist corporations predominate. A counter-reaction brews in the minds of intellectuals seeking “fairer” outcomes. The intellectual and social climate required for entrepreneurship to flourish is stifled. Mass democracy leads to corruption, to strong-man populists emerging either vigorously defending corporatist capitalism or promoting an insidious type of socialism. Although he emphasized that he was analyzing, not advocating, Schumpeter was horrified by the potential downfall. Although he shied from saying much about resistance, his strictures constitute a warning.

It is an interesting question: are the four years of Donald Trump a belated vindication of Schumpeter’s thinking?

Not yet, but the present presidential term suggests that Schumpeter was not entirely off the mark. Certainly, President Trump since taking office in 2017 embodies and exemplifies some of the characteristics that Schumpeter worried about. Before examining that claim, first a glance at the man whose analysis proved so fascinating, and some thoughts as to what is living and dead in Schumpeter’s analysis.

Joseph Alois Schumpeter (1883–1950), son of successful textile factory owner-parents, was born in Triesch in Moravia, in what is now the Czech Republic. On the death of his father at a young age, the family moved to Vienna and lived in prosperous circumstances. Practical experience in helping to run the family business prepared him for thinking about commerce and economic studies at the University of Vienna.

His formative years were spent in the Austro-Hungarian Empire — that territory of varied geography and peoples — which then included Austria and most of what is now the Czech Republic, Slovakia, Hungary, parts of Romania, and northeast parts of Italy, which dissolved consequent to the catastrophe of World War I. He remained sentimental about the fin de siècle order, the multi-cultural, many-faceted world of the Austria-Hungary dual monarchy. Including its refinement of Biedermeier-style furniture, the artistic flowering of the Viennese secession movement, the buzz of conversations in coffee shops, art nouveau glass shade lamps providing a mysterious reflective allure to any room. The end was turmoil, civil war, kindling of class and ethnic hatreds. Enough to turn Schumpeter conservative.

Schumpeter lectured at universities in Graz and Bonn, published on economic trends and entrepreneurship, discovered from travels and lectures, the great cities of Europe, the UK, and the United States. Schumpeter had experience in government including, briefly, as Minister for Finance in the Republic of German-Austria in 1919. From 1925 until 1932, he was a professor of economics at the University of Bonn.

He escaped a world in which, in Joseph Roth’s phrase, a person’s words “rattle, clatter, and bang. Batteries, mortars, rifles, running fire, all come spewing out of his larynx. World wars slumber in his bosom.” He emigrated to the safe enclave of Harvard, where he was a visiting lecturer in 1927–28 and 1930, and a professor of economics from 1932 to his retirement in 1949. In the early 1930s, he assisted many European intellectuals and businessmen displaced by Nazism — Jew and Gentile alike — to find a home in the United States.

Schumpeter took to heart Heraclitus’ dictum that “the only thing that is constant is change.” Rather than viewing capitalism as a stable mechanism for regulating economic life, he saw it as dynamic, a constant, evolutionary process of innovation, with entrepreneurship at its heart. Together with “creative destruction,” a phrase first used in Capitalism, Socialism, and Democracy, which calls attention to innovations in the manufacturing process that increase productivity and make redundant ways of working.

Like many economists of encyclopaedic interests, for much of his life he sought to discern trends in history and in the contemporary world, and fancied his ability to estimate the future. Not in the crude Marxist sense of discerning laws of inevitability; nothing is inevitable when human life and actors change course; but trends are trends. The book Business Cycles (in two volumes, 1939) he thought was his magnum opus. Others, including his wife, Elizabeth Brody, who edited the posthumously published and well-regarded History of Economic Analysis (1954), thought otherwise. Interestingly, Capitalism, Socialism and Democracy outsold everything else, with more translations than any of his other works.

For Schumpeter, democracy is a system of elite competition through elections to rule the populace. Skeptical of “mass democracy,” he dismissed the ability of ordinary people to meaningfully participate, deliberate, and act. Rousseau’s idea of direct democracy, the Athenian ideal, the “classical theory of democracy”— the idea that individual citizens should be able to articulate and vote on decisions that affect them, he thought fantastic. The reverence for the “will of the people,” as in Lincoln’s phrase “government of the people, by the people, for the people,” Schumpeter saw as an example of American literalism. In contrast, Schumpeter’s view is of democracy by degrees; democracy can never mean anything more than electoral competition among elites. Importantly, he saw that voting can aid in decision making. Although he is criticized for undemocratic, authoritarian instincts (a view I find simplistic), much of what he wrote is comparable to John Stuart Mills’ idea of representative democracy.

On Mill’s assessment, in On Liberty (1859) and Considerations on Representative Government (1861), an individual is represented in a political system by elected representatives, members of the elite in Schumpeterian terms. Participation is not individualistic but through representatives. Mill saw that representative bodies, including parliaments, enable informed public debate; those representatives are watchdogs of those professionals who create and administer laws and public policy and exercise discretion. The great political philosopher Edmund Burke also sees members of parliament as representatives and as practical thinkers who exert judgment as to the best interest of their electors and of society.

What can be said about the democratic world almost eighty years since Schumpeter published his work? First, not everything eventuated as he guessed. With technological and other innovations, the dynamism of creativity in economics and organization accelerated. With the invention of the worldwide web, Moore’s Law on innovation, productivity continued to grow. Second, the liberation of societies trapped in ideological straight jackets, and the developments in medical science and approaches, has extended economic prosperity and life expectancy across the globe. Third, the effective check against monopolistic and anti-competitive practices in various countries, especially and significantly in the OECD, picked up pace. Fourth, world trade considerably expanded, trade and tariff barriers broke down. Fifth, I would argue that America was mostly well-governed prior to 2017.

The expansion of liberal democracy met resistance. Distinctions, however, need to be made between the “liberal” and “democratic” aspects of societies. Not that the contrast can be too neat. There are degrees of democracy and of liberality. They are not Siamese twins.

A comparable mistake is to regard all elitists as the same in elitist thought.
In sum, with various exceptions, Schumpeter’s hope that society be run effectively by those who have the most experienced and practical knowledge responsible for success is truer today than in 1942. Except where staff-capture of institutions, particularly those largely immune to market forces (academia, public broadcasters, civil services) has ensconced new elitists in positions of power and influence but trapped them in self-reverential bubbles of “public” discourse.

In the United States, President Trump exhibits many of the worst features of the crony capitalist. His instincts are to bully, cajole, and get the state to boss opponents. But even here, the separation of powers, the diffusion of control of power across and within a federal system, thwarts Trump’s baser desires.
In thinking about trends, dangers, the husbandry of the political order, Schumpeter’s warning remains prescient, even if — thank heavens — not everything he discerned has come to pass.

A neglected issue in Schumpeter’s analysis concerns what role government, society, corporations, educational institutions, and others have to cushion the blows, lend a helping hand, assist the displaced be retrained, repurposed in life, with dignity and meaning. Much of the support for Trump comes from those “losers” in the hollowing out of American industry. According to the Pew Research Center, a majority of non-college-educated whites, particularly blue-collar males, once a vital part of the Democratic base, vote for Trump.

Enough has been written elsewhere about the Trump presidency to notice loss of sight of moral baselines, the hurricane-like chaos of his administration, the fetid, special interests swamp of public and private insider-lobbying, and back-hand favor trading. Far from draining the swamp, he has added to the pollution and its divisive miasma.

It would be nice to have a rational theory to explain this, but perhaps the president is an instance of a man dominated by narcissism rather than capitalism. Until the last year of his presidency, Wall Street seemed to form an assessment: stocks were up and so was employment. But the jury is out as to what President Trump was an expression of. He is a populist who will say whatever he thinks gets him popularity or votes. Trump is representative of a certain type of capitalist elite. The expression of the kind that cannot deal with, say, a pandemic or sudden climate change, or the next stage of technological developments. One senses something new in the air, but it is hard to say exactly what.

One thing for sure: Destruction is not always creative, especially in the political sphere.