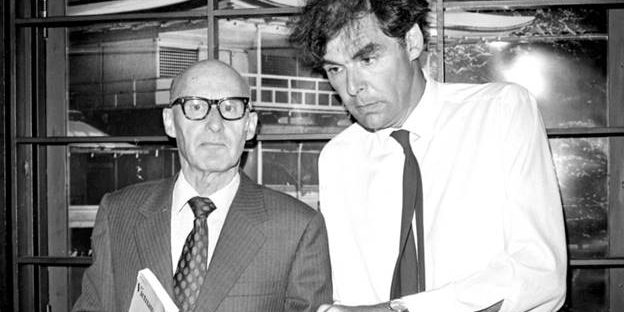 Published in The Age, 6 June 2014, http://www.theage.com.au/comment/obituaries/david-armstrong-philosopher-with-an-international-reputation-20140606-zs006?skin=dumb-phone

David Armstrong, affectionally known as DMA or Armo, was in an elite category of Australian intellectuals – a philosopher who developed an international reputation, perhaps the most considerable of any Australian philosopher.

His main interests were the theory of knowledge and perception and the philosophy of mind and metaphysics. He developed the theory that mental states are nothing more than brain states, that consciousness is brain processing. This view is now known as “the identity theory of mind” or “Australian materialism”.

The UK-born philosopher Bernard Williams once quipped that Australia was not only the place where the theory that the mind is identical to the brain was invented but it was the only place where it is true.

David Malet Armstrong was born in Melbourne on July 8, 1926, and educated at the Dragon School, Oxford, and Geelong Grammar School. After service with the Royal Australian Navy in 1945 and 1946, he enrolled at the University of Sydney and graduated with a first-class honours degree in philosophy in 1950.

His philosophical studies continued at Exeter College, Oxford, and then he lectured at London University before returning to Australia in 1955 to take up a post as a lecturer in philosophy at the University of Melbourne. He became a senior lecturer in 1961. In 1964, Armstrong returned to the University of Sydney as the Challis Professor of Philosophy, replacing John Mackie. He held this position until retirement in 1991.

Armstrong was sometimes vilely abused and shunned by former colleagues and students from the rival department, but nevertheless sought to maintain civil relations with most of his persecutors. His razor-sharp, honest thinking led him to believe all his adversaries were capable of being ‘‘saved’’ from error through robust argument.

Amid the turmoil, Armstrong, David Stove (1927-1994), and his other departmental colleagues, produced a stream of outstanding philosophical work. The Canadian philosopher Andrew Irvine regarded Armstrong as a major figure in advancing the “Sydney Line”, “that brilliant combination of realism and empiricism, wedded with an unyielding resistance to moral, cultural and cognitive relativism”.

Armstrong’s principal publications were Berkeley’s Theory of Vision: A Critical Examination of Bishop Berkeley’s Essay Towards a New Theory of Vision (1960), Perception and the Physical World (1961), Bodily Sensations (1962), A Materialist Theory of the Mind (1968), Belief, Truth and Knowledge (1973), Universals and Scientific Realism in two volumes: Nominalism and Realism and A Theory of Universals (1978), The Nature of Mind and Other Essays (1980), What is a Law of Nature? (1983), Consciousness and Causality (1984), Universals: An Opinionated Introduction (1989), A Combinatorial Theory of Possibility (1989, A World of States of Affairs (1997), The Mind-body Problem (1999), and Truth and Truthmakers (2004).

Armstrong’s influence through these and other publications was immense – in epistemology, realism and materialism. One reviewer, summing up What is a Law of Nature?, stated that “all future work … starts here”. Several full-length books considered his ideas, of which the most noteworthy is Ontology, Causality and Mind. Essays in Honour of D.M. Armstrong (1993), edited by John Bacon, Keith Campbell and Lloyd Reinhardt.

Armstrong readily gave his time to many students, potential and current philosophers. More importantly, he cajoled, encouraged and persuaded all he knew to think freshly and critically.

He was made an Officer of the Order of Australia (AO) in 1993 and received a Centenary Medal in 2001.

Beyond philosophy, Armstrong was a politically engaged intellectual and active in the Australian Association for Cultural Freedom (AACF), the anti-totalitarian political and cultural organisation. In that context, Armstrong was founder and for many years chairman of the Sydney University Association for Cultural Freedom, which organised lunchtime talks at the university on political and cultural matters.

He was also for many years a member of the editorial board of, and contributor to, Quadrant magazine, the main publication of the AACF. He was active in support of the causes of Soviet dissidents, and of a non-communist South Vietnam during the years of the war in south-east Asia.

Professor Peter Anstey, Professor of Philosophy at the University of Sydney, commented on an earlier draft of this obituary.

I knew Armstrong from my university days and read some of his works, including A Materialist Theory of the Mind and Belief, Truth and Knowledge.

When I was working on a MA thesis on John Anderson’s thinking (in 1977/78), which I never completed, Armstrong commented on a couple of the early Chapters. He urged me to finish. But my involvement in the Labor Council of NSW precluded me from allocating the time.

Armstrong once told me that in the latter part of the 1970s that Tony Abbott, then a student at the University of Sydney, came to see him to offer moral support. Abbott did not say so at the time, but Armstrong thought this approach was inspired by Bob Santamaria.

On politics, I thought Armstrong sincere, intelligently conservative, but not exceptionally well read. Given his achievements and demands to keep up with latest developments in philosophy, that is hardly surprising. Like many of us, he trusted the opinions of those he trusted and knew over many years.

Like A.J. Baker, whose obituary I was also to write, Armstrong made some helpful suggestions about my Robieson PhD and urged that I complete.