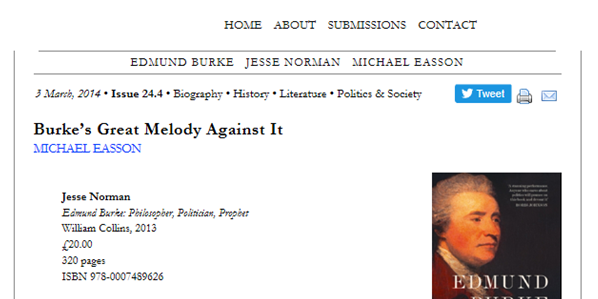 Conservative MP Jesse Norman set out to write an introduction to the ideas, context, and continuing relevance of Edmund Burke (1729-1797), Whig iconoclast and fierce critic of the French Revolution. His book is limited in its ambitions and not meant as a work of scholarship; instead, it offers a survey of the literature and an argument about why Burke should be celebrated as the greatest of conservative minds. In the United States, where this book was first published, the title is Edmund Burke: The First Conservative, whereas in the UK it is more shyly titled Edmund Burke: Philosopher, Politician, Prophet.

Norman presents his hero as a creative thinker, which should whet the appetite of anyone, the present reviewer included, who is inclined to champion the mind of this interesting Anglo-Irish intellectual. If Norman is partisan and needlessly strident in proclaiming Burke as “ours” (i.e., a conservative), his enthusiasm is admirable even if the facts pose incorrigible difficulties. Likewise, it is not true that “Burke has been all but ignored in recent years, or reduced to a clutch of standard clichés and sound bites.” Given that Burke’s Reflections on the Revolution in France, among other works, have been in continuous circulation since 1790, this assertion requires qualification.

A plethora of books has been published on Burke. Some of the greatest accounts include Conor Cruise O’Brien’s The Great Melody: A Thematic Biography of Edmund Burke (1992), about Burke’s consistent opposition to the abuse of power, and Paddy Bullard’s Edmund Burke and the Art of Rhetoric (2011), which ponders whether Burke’s wordy eloquence compromised his achievement as a political thinker. Isaac Kramnick also wrote an interesting journal article on “The Left and Edmund Burke” in Political Theory (1983), describing hostility, admiration, and ambivalence, and collected fresh perspectives in a book he edited, Edmund Burke (1974).

Norman’s book is in the tradition of writings over the past fifty years by conservative authors championing Burke’s conservatism. Yet Burke’s support for the liberty of the American colonies, his opposition to the oppression of Catholics in Ireland, his withering critique of British rule in India, and his fear and hatred of what revolution wrought in France were all grounded in and sympathetic to what now would be called the liberal spirit. This, however, is probably too vast a term. There is an explanation that can be lifted from W.B. Yeats’s lines in the poem ‘The Seven Sages’ (1933): “American colonies, Ireland, France and India / Harried, and Burke’s great melody against it”, which turns on the question of what is the “it”. O’Brien decided it was opposition to the blatant and cruel misuse of power.

This was the great theme that informed Burke’s rhetoric and moved him body and soul to fight tyranny. A contrasting interpretation can be found in Isaiah Berlin’s famous essay ‘The Counter-Enlightenment’, where he dismissed Burke’s criticisms of the French Revolution as “anti-intellectual diatribes” and described their “strongly conservative and, indeed, reactionary implications.” This rather stylishly imitated the typecasting of ‘Burke the authoritarian’ by the historian Lewis Namier and his second-rate followers. O’Brien, more persuasively, sees Burke’s opposition to the French revolution as “the first great act of intellectual resistance against the first great experiment in totalitarian innovation.”

In the final page of his book, Norman says of Burke: “His thought is imbued with the importance of history and memory, and an Orwellian detestation of those that would erase them.” The comparison with Orwell is instructive. Like Orwell, Burke was a complicated thinker who spoke (and continues to speak) to people of all political persuasions. He was appalled by sentimental, naïve, and sloppy opinions about what was taking place in revolutionary France. In one of the anti-revolutionary writings, the Appeal from the New to the Old Whigs (1791), he sought to persuade the newer representatives of a tradition to consider the views of those who had gone before them. Burke disputed with his erstwhile ally Charles James Fox (1749-1806) about the latter’s praise for revolutionary France. Orwell similarly tried to rally his side – the Left – to stop barracking for Soviet despotism. Some of what both authors wrote was so strident and biting, that conservatives were struck with joy. But their writings were pitched to shame their side to reason, and to state a case which needed to be answered. Burke and Orwell fearlessly teased truth from the evidence and stood for an enlightened, questioning humanism. If that comparison is too capacious, then in plainer terms, they were hostile about arbitrary execution and fanatical rule.

Some sweeping and meaningless claims are made by Norman, such as that “Burke can be said to be the hinge of Anglo-American, and indeed the world’s political modernity.” It is not clear what this means, if anything. He claims, similarly, that “Burke would have welcomed much of the history of the past 200-odd years.”  One would surely hope otherwise.  There are also some daring suggestions, such as the assertion that the philosopher Alasdair MacIntyre owes – or should owe – a huge debt to Burke, yet the thought is not advanced beyond a single sentence. On the circumstances of Burke’s early life in Ireland and London, an element of the toff creeps through as Norman claims that “Riots were sometimes seen as a means for an urban underclass to even the score, and could offer rich pickings…”  One wishes for a keener social insight.

Some passages shine, as Norman grasps Burke’s insights. This is particularly true of his account of MPs’ responsibility to represent their constituents and to think independently for themselves. For Burke, this raised two questions. One was whether an MP should act in all instances as they think their constituents would want or to exercise their own judgement. The other was whether MPs should think independently or in blocs with other MPs. Thinking in isolation can be dangerous; for, as Burke says: “When bad men combine, the good must associate; else they will fall, one by one, an unpitied sacrifice in a contemptible struggle.” Elsewhere, Burke’s defence of the aristocracy and his innate fear of democracy, leave even Norman cold. Burke was never always right – he was inconsistent on some issues; he was a divided soul on others – yet usually he wrote powerfully and well.

Burke’s Reflections sparked a furious response at the time of its publication, including, most famously, by Thomas Paine in his pamphlet on the Rights of Man (1791), as well as works such as Mary Wollstonecraft’s A Vindication of the Rights of Men and James Mackintosh’s Vindiciae Gallicae.  Yet as the late Christopher Hitchens observed in his paean, Thomas Paine’s Rights of Man: A Biography (2007), there were many ways in which Burke was right and Paine terribly wrong about what was really happening in revolutionary France. Hitchens’ observation respected that Burke was not merely against something; he stood for something – for the values and traditions that had been won in time and needed to be extended not swept away by the new.

Six pages into the final chapter, Norman argues that Burke is a conservative in the modern sense. This is stated in excess, as an “inconvenient truth”. All sorts of straw men are paraded forth.  “Liberalism”, we are told, “is unimpressed by the past”, whereas “Burke quarries it.” One can see the stuffing from the straw man flying in the wind. But more seriously, the claim that Burke was a conservative in the modern sense is misleading for at least four reasons. First, Burke was actually a Whig, opposed to the conservative party of his day, the Tories.  Second, his famous Reflections were a plea from the old Whigs to the new, so he was arguing from within this tradition. Like George Orwell castigating and cajoling his friends on the Left about the Russian Revolution, Burke wanted to save the political allies with whom he felt most intellectually at home from the naive and sentimental embrace of the French Revolution in ignorance of its devastating consequences.

The third reason is that from his own time until the 20th century Burke was claimed as the liberal exemplar par excellence. This is how he was regarded by writers such as John Morley and John Stuart Mill. Only from the 1950s onwards was Burke more frequently described as a conservative thinker, perhaps, in part, because the far Left’s embrace of Bolshevism caused anti-revolutionists like Burke to be retrospectively typecast as conservatives. He cannot be pigeon-holed like that.

Fourth, one of the lasting consequences of the French Revolution, based on the seating in the National Assembly, was to characterise political beliefs on the basis of whether they were literally to the left or the right of the chair. Given all that Burke said about the debilitating influence of the French Revolution, it would indeed be a deep irony if Burke’s politics were now to be reduced to merely languishing on one side. The left-right distinction is an anachronism. He wanted to address all and to be relevant to all sides of the political chamber, both then and now.

Alas, the present debate, and Norman’s contribution, is reminiscent of the American Commentary magazine editor Norman Podhoretz’s claim in 1984 that George Orwell, “if he were alive today”, would have been a neo-conservative or perhaps a real conservative. The speculation is childish. Perhaps what is interesting is the story of ‘Burke in History’, how he is perceived by different generations and within competing traditions; Burke was his own authentic voice – neither entirely liberal nor conservative – much as the late Polish (and Oxford) philosopher Leszek Kołakowski (1927-2009) described himself as a Liberal Conservative Social Democrat.

Because Norman is a politician with limited time and aptitude for systematic thinking, there is much to quibble with in this book. He is, however, a politician who is keen to put his case. That is greatly to his credit. If only there were more politicians like him, with a book or two in them.

One day, a decade or two away, in retirement, it would be fun to read, reflect, and if my thoughts were worthy, write on Edmund Burke, one of the most interesting of writers on politics who ever lived. A reason he is interesting is because, torn by some of the great issues of his day, his rhetoric and power of writing were his way of resolving the tension.

Click here to read the article as it appeared.