(2015) Israel-Palestinian Conflict Will Be A Powder Keg for Labor 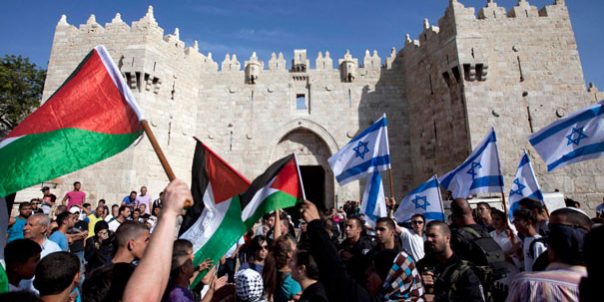 The Middle East, more particularly the Israeli-Palestinian conflict, is a subject about which few believers listen to arguments from the other side. With so vexed an issue, polemics, rhetoric, straw-man arguments and raw emotion cloud debate and reason.

The issue is now potentially a powder keg for the Australian Labor Party.

The claims by former foreign minister Bob Carr in an article for The Guardian newspaper on January 14 illustrate a looming debate at the forthcoming ALP national conference in July. Carr said he “winced” at Australia’s vote at the UN Security Council on the recognition of a Palestinian state in December, alleging the Coalition meekly delivered “what the pro-Israel lobby in Australia wanted”, ignored the national interest and delayed the achievement of a two-state solution.

So what are the facts and the ­issues? Late last year, after many iterations of an earlier draft, Jordan submitted a resolution to the UN Security Council on the Middle East. The resolution was voted on, on December 29, but failed to muster the minimum nine yes votes required (a two-thirds affirmative vote) from the council for adoption and then for a vote before the full assembly of the UN. The motion received eight affirmative votes, from Jordan, China, France, Russia, Luxembourg, Chad, Chile and Argentina; two no votes, from the US and Australia; and five abstentions, from Britain, Lithuania, Nigeria, South Korea and Rwanda.

Samantha Power, the US ambassador to the UN, said the resolution was “deeply imbalanced and contains many elements that are not conducive to negotiations between the parties, including unconstructive deadlines that take no account for Israeli’s legitimate security concerns”.

There the matter rested, without much Australian interest, until Carr, once more, entered the debate demanding recognition of “Palestine”, as proposed by Jordan and others.

The draft UN resolution did not deserve support for many reasons. First, although the resolution is 80 per cent OK, the remaining 20 per cent is a minefield. Second, although the draft preaches peace, in parts the resolution is vague and unbalanced, sometimes dangerously so. With mere declaratory resolutions, there is the temptation to sweep the deficiencies aside and let it go through. But the better view, especially when every word is loaded with resolutions involving the Middle East, is not blithely to ignore the hardest facts.

Third, there is already a good deal of constructive and forceful diplomacy going on in coaxing, cajoling and pleading with Israel and the Palestinians to reach a fair conclusion. Foremost in these efforts are those by US Secretary of State John Kerry and the Quartet (the UN, the US, the European Union and Russia) led by Tony Blair. The proposed resolution undermines their efforts.

Fourth, a unilateral declaration only helps the Israeli Right and those Palestinians who think endless delays and avoidance of a deal improves their bargaining power in the longer term. The two parties who need to work out a solution directly are the Israelis and the Palestinians.

Fifth, it is irresponsible to recognise a country with no agreed boundaries. If recognition ignores what ought to be and would be defined borders, we are delving into the realm of metaphysics rather than practical politics. The world might as well recognise Utopia.

Sixth, a country without clear definition of its borders is a recipe for border skirmishes in defining clear borders.

Seventh, Israel has legitimate fears about the formation of a second Hamastan in the heart of Israel – this is front and centre of Israel’s security concerns.

Eighth, the security concerns of Israel are given short shrift. Noticeably, the UN draft resolution was weaker than what Carr advocated at the NSW ALP conference last July. One of the key planks of Carr’s resolution then was that “NSW Labor welcomes the decision of the Palestinian Authority to commit to a demilitarised Palestine with the presence of international peacekeepers, including US forces”.

Either this is an essential point or a matter of rhetoric. In the UN resolution there was no reference to a demilitarised Palestine. What the resolution refers to is the need for “security arrangements, including through a third-party presence that guarantee and respect the sovereignty of a state of Palestine, including through a full and phased withdrawal of the Israeli occupying forces”, which is proposed to occur no later than the end of 2017. This is an incredibly weak statement. Yet, in his January article, Carr says of the proposed UN wording: “It thus captured the recent Palestinian concession that there should be Western peacekeepers within the territory of their putative state. And Australia voted that down.” But that is not what the words in the draft resolution actually say.

Ninth, the status of Palestinian refugees and their descendants is confusingly mentioned in the draft Jordanian resolution. In 1999, then Israeli prime minister Ehud Barak offered the resettlement of up to 50,000 in Israel. Such numbers have been off the table ever since. Barak’s proposal, part of a wider package, was rejected by Yasser Arafat when he spurned the Clinton peace proposals. Perhaps economic compensation, long proposed by the Americans, in rebuilding and developing Palestinian society, is what is needed. But the reference, in the draft UN resolution, to resolution 194 (iii), as stipulated in the Arab Peace Initiative, is unhelpful. UN resolution 194 was adopted in 1948 and proposed the return of Palestinian refugees to their homes. The Arab peace initiative proposes all refugees and their descendants have the right of settlement in Israel. This is an impractical idea.

Tenth, the proposed UN resolution recklessly refers to the International Court of Justice’s decision of July 9, 2004, on the legal consequences of the construction of a security barrier in the occupied Palestinian territory. On one reading, this reference is not saying much. On another, this is suggesting the wall be pulled down.

Construction of the barrier began in 2002, following the Palestinian intifada, and its purpose was to stop the wave of suicide bombings that took hundreds of lives in Israel. The Palestinian Authority sought a ruling from the International Court of Justice on the fence. Israel refused to present evidence directly, arguing the court had no jurisdiction, and presented only an advisory opinion on the jurisdiction issue. The majority of the court in an advisory opinion, however, ruled for the Palestinians in a complicated assessment, with dissent from several judges. Given the lives saved, no Israeli government would dismantle this structure. Certainly, with border adjustments, parts will need to be rebuilt in accordance with new boundaries. Sadly, however, until confidence is built up, there will continue to be a wall.

Speaking of which, point six of the draft UN resolution calls on both parties to build trust and engage in confidence-building measures. In that spirit, how about the Palestinian Authority banning television shows that night and day incite the murder of Jews? This is an unrelenting theme, featured in children’s shows and cartoons, and popular dramas, on Palestinian television. There is a fear the PA is so weak it is unable to control elements interested in continuing the armed struggle.

After all, when Israel’s Gaza withdrawal occurred, following agreement with Mahmoud Abbas, Hamas was soon after ruling the roost. Unrelenting rocket attacks on Israel launched from Gaza have been a constant ever since. Abbas seems to be an honourable man but a weak one and, at nearly 80, with few years left for the political stage. It is more than a decade since he last faced direct election. Who knows who will come next.

The slaughter last November of rabbis praying in a synagogue in Jerusalem (historic Jewish Jerusalem) and the celebratory response in the Arab world make many Israelis wonder what lies ahead. (Note that the Jordanian parliament passed a motion hailing these murderers as martyrs. There were celebrations, firecrackers going off and dancing in the street in Ramallah.)

The arguments against the draft UN resolution united the Israeli opposition (the Israel Labour Party, led by Isaac Herzog, in coalition with Hatnuah, led by Tzipi Livni), and Kerry, the US Secretary of State, among other significant players, in urging it be voted down.

Israeli Labour has been petitioning foreign governments against unilateral declaration. Labour Party secretary Hilik Bar wrote an open letter to Britain about this. He cited unilateralism as making things worse in terms of Israel’s desire to move back to serious peace talks. A renewed opportunity with the latter is with the election of a new government in Israel. It appears Labour and its ­coalition allies are performing strongly.

The recent stance on the Middle East adopted by Carr, however, departs from Australia’s reasonable position of the achievement of national objectives and high ideals, through practical means. Unilateral adventurism and inconsistency are hardly the hallmarks of creative realism.

The ALP needs to be cautious about sweeping generalisations, wary of lazy wording in conference resolutions and particularly determined to get the language right with anything that might be supported on the international stage.

With the recent draft UN resolution on Palestine, Australia’s interest is best served by pressing Israel and the Palestinians to address the issues that divide them, to display impatience or encouragement as the case requires. Even if a particular resolution is four-fifths OK, all the words matter and cannot be regarded lightly. A draft UN resolution that sets unilateral deadlines, avoids the hard security issues and is laden with provocative references to Israel is not the way ahead.

Australia’s best hopes are served by working in tandem with the US in pressing for a workable solution. Endorsement of one-sided, loosely worded resolutions is not a responsible position for our country. Labor ought to be better than that. I believe it will be, come the July ALP national conference. But, in view of Carr’s persistent advocacy, there’s a long road ahead.

This was originally proposed as a reply to Bob Carr’s Guardian article. But the relevant editors of that publication said my piece was no longer contemporary or interesting, but that I could submit something closer to the ALP National Conference in July 2015.

I am grateful that, with this particular piece, I found an alternative space.

I am not sure, however, how many people in the ALP read this and my other articles on the Middle East. But I wrote for three reasons: First, as an Aide Memoir to anyone searching for a perspective other than Carr’s and even more hostile positions opposed to Israel. Second, I wrote as a personal discipline to master the arguments. Third, I wanted to express a sensible, social democratic argument on the issues.

From my earliest involvement in the ALP, I believed that where you stood on Israel was one of the fundamental tests of political decency. I still do.