(2015) The Middle East Book Every Leftie Should Read 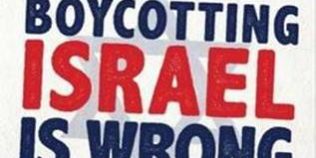 Review of Philip Mendes & Nick Dyrenfurth, Boycotting Israel is Wrong. The Progressive Path to Peace Between Palestinians and Israelis, New South, Kensington, 2015, published on the Plus61j website, 20 May 2015, Review: The Middle East Book every Leftie should read May 20, 2015 – +61J (plus61j.net.au)

Written by two left-of centre social democrats opposed to the Greater Israel propaganda of the Israeli Right, Mendes and Dyrenfurth have written a well-argued, punchy critique of the Boycott Divestment and Sanctions (BDS) campaign against Israel.

Their aim is to show that regardless of the high rhetoric and idealism of some proponents, the BDS campaign is frequently anti-Semitic, counter-productive to peace, and crankily ideological. They argue that progressives should eschew the campaign, suggesting alternatives. They largely succeed in this, aiming bulls-eyes against the most virulent version of BDS, the boycott of everything Israeli, as compared to settlement BDS, the boycott only of goods produced on the West Bank, deep in Palestinian territory occupied by settlements and their often local hires.

Chapters in the book traverse the development of Zionism, as a mostly progressive mission, and example case studies of BDS in Australia as well as in the UK & North America. A short concluding Chapter on progressive alternatives completes the argument. There are 28 pages of footnotes, a bibliography (18 pages), and an index for easy cross-referencing. A useful Appendix summarises typical views on the conflict and where hard-line pro-Palestinian, moderate pro-Palestinian, moderate pro-Israel, and hard-line pro-Israel stances are contrasted on some of the main points of the conflict.

The book yields a harvest of sobering conclusions. First, the BDS campaign, as actually practiced, is demonstrably a strand of anti-Semitism and attracts such types. The parallels with the Nazi’s banning of Jewish products and individuals is a worrying parallel. Even hostile-to-Israel academics, such as Noam Chomsky, are uncomfortable with the company many BDS activists keep. Reading about Arabic Ph.D. students at Israeli universities being shunned by pro-BDS academics in the West is saddening.  Second, BDS is counter-productive to the peace process and encourages extremists on all sides. A blanket ban on Israeli products and people is opposed even by the leadership of the Palestinian Authority. Yet this has not stopped academics such as those at Sydney University’s Centre for Peace and Conflict Studies from refusing to host visits from Israeli anti-settler academics. Third, the authors point to the estrangement of Jewish and Israeli intellectuals from some sections of the Western Left as a painful loss: “…pro-BDS campaigns have directly led to the departure of Jews from a number of progressive organisations, a type of dual tragedy.”

Given the Left’s traditional opposition to racism, there is a disturbing complacency about BDS and its proponents. Support for BDS in Australia, however, is largely limited to the margins, the far Left, sections of the Greens, and little-known academics. Noisy protests against Max Brenner chocolate shops and recent demonstrations against academic freedom, are some of the ugliest local manifestations.

The authors underscore the origin, history, and fundamentalist agenda of the BDS including opposition to a two-state solution, support for the return of all Palestinians to Israel proper, the extinguishing of Israel as a Jewish state. In short, a maximalist idea of Palestinian national and human rights, at the expense of national and human rights for Israeli Jews, drives and informs this insidious campaign.

A hostile critique of Israel’s very right to exist and a mis-identification of Israel as a quasi-Apartheid state guide BDS activists. The installment of pro-settler politicians to senior Israeli Cabinet posts, such as Naftali Bennett of the Jewish Homeland party, complicates the defence of Israel on the Left. Yet the case remains that Israel is a democracy, in which non-Jewish citizens enjoy full civil rights, there is no discrimination to entry to universities, public transport – and all the other features usually associated with Apartheid.

A deficiency of the book is the inadequate discussion of the distinction between a diehard BDS (banning anyone and everything from Israel) and a settler ban (on products). There may even be an ambivalence in the book about the latter. Reference is made to Peter Beinart’s The Crisis of Zionism (2012) and his advocacy of a form of “Zionist BDS” which targets products of West Bank settlements, but the discussion in the book about this ‘alternative’ is not taken very far. Far from a fringe perspective, this is where certain non-Government Organisations, Churches, and a few unions are steering the movement, a so-called moderate BDS. The Palestinian Authority is supportive of this ‘selective’ boycott. The British Trade Union Congress recently supported a prohibition against the importation of West Bank settlement products. This trend could grow and be the most dangerous aspect of the BDS movement.

Distinguishing between settlement products and others from Israel may not be easy or simply a matter of reading the label.  Just as with the unyielding, intractable BDS campaign, however, even a selective boycott could prove catastrophic for the overall Palestinian economy, ordinary workers, and the community there.

The core problem is the stalled peace process and the desperate need for peace. The authors emphasise that this will only happen through a process of empathy, dialogue, and compromise. They conclude: “BDS has left a trail of acrimonious debates, in part encouraged by the mainstreaming of anti-Semitic public discourse within the West, and pushed diaspora Jews away from progressively minded organisations.” They call for a boycott of the boycotters. That is an excellent place to start.

The BDS campaign is one of Israel’s most virulent threats.

What is described in Mendes’ and Dyrenfurth’s book as “moderate BDS” potentially is a means of transforming the anti-Semitic virus into something very effective, widespread and damaging to Israel’s economic viability. The biggest negative impact, however, would be to those Palestinians dependent on economic integration, employment, and prosperity associated with Israel’s dynamic economy.