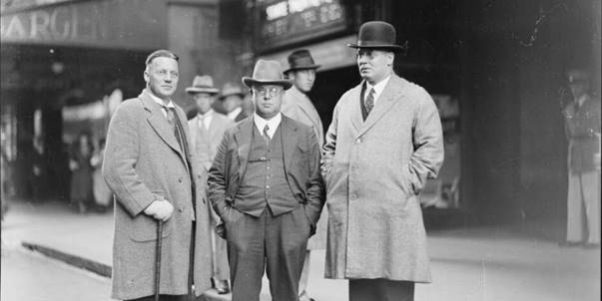 Educated locally and at Sydney Boys’ High School, John proceeded to Teachers’ College in 1912 and taught at Parramatta High School. On 27 September 1915 he enlisted in the Australian Imperial Force. He served (1916-17) with the 55th Battalion in Egypt, France and Belgium.  Wounded at Polygon Wood in September 1917, he was invalided to England, repatriated and discharged on 21 April 1919. He graduated from the University of Sydney (B.A., 1921) with the university medal in history.

On 17 December 1921 at Christ Church, Sydney, McCallum married with Anglican rites Eda Lockwood, a 20-year-old teacher; they were to have four children before being divorced in 1938. He resumed teaching in 1922; except for periods (1924-27 and 1929-31) at Grafton, he was based in Sydney. Promoted examiner in 1937, he lectured in history at Balmain Teachers’ College in 1947-49. At the Presbyterian Church, Grafton, on 27 November 1940 he married Edith Ellen Ernestina Fay, a 30-year-old schoolteacher; this marriage, too, ended in divorce.

From the 1920s McCallum was active in the Workers’ Educational Association; he taught history and economics, and contributed to the Australian Highway. He also belonged to Round Table.  After working (1922-23) with R.W.G. Mackay on the fortnightly magazine, New Outlook, McCallum became prominent in the Australian Institute of Political Science, publishing articles in its journal, Australian Quarterly, and presenting papers at its summer schools. His writings urged Australians to adopt an independent defence policy; they also deplored the industrial left wing’s attempts to dominate the Australian Labor Party.

In 1931 McCallum was elected State president of the federal Labor Party. An article he published (1932) in Australian Quarterly described Labor as the party of momentum. He stood unsuccessfully for the seats of Lakemba (1932) in the Legislative Assembly and Martin (1934) in the House of Representatives. Crippled by the breakaway party of J. T. Lang, in the mid-1930s federal Labor was in a moribund condition in New South Wales. McCallum savagely attacked Lang’s despotism and party machine: he claimed that Lang had turned to left-wing extremists for support in exchange for ‘complete and arbitrary authority’.

McCallum declared that federal Labor had sold out to the rebels at the ALP unity conference in 1936. Convinced that the Catholic Church had influenced the State ALP conference (1937) to adopt a neutral policy on the Spanish Civil War and on fascism, and troubled by the threats posed by Japan and the European dictators, he rejected Labor’s isolationism and left the party.

In the late 1930s and early 1940s McCallum regularly appeared on the Australian Broadcasting Commission’s schools programme, ‘The World We Live In’, to give his views on international affairs. A foundation member (1944) of the Liberal Party, he was elected to the Senate in 1949 and entered that House in June 1950. His maiden speech revealed how he had drifted from his Labor principles: ‘those who go on saying that the fundamental thing today is to protect the ordinary man against the monopolist …and the entrepreneur are living in an age that is finished. I consider that the fundamental problem today is to protect everybody against the growing power of the State’. In the same speech he also advocated the establishment of the Joint Parliamentary Committee on Foreign Affairs, which he was to join on its formation in 1952. He was re-elected to parliament in 1951 and 1955, but his career was undistinguished. Chairman of the Senate Select Committee on the Development of Canberra (1954-55) and the Joint Committee on the Australian Capital Territory (from 1957), he foreshadowed changes to the Senate committee system that were introduced in the 1970s. He was a member (1952-59) of the council of the Australian National University.

Kindly, quiet and scholarly, McCallum could be fierce on some issues, particularly the danger of communism.He opposed state aid to private schools. In his last term he found it increasingly hard to enter the rough and tumble of debate; he was defeated in a Liberal pre-selection ballot in 1961 and relinquished his seat in the Senate in June 1962. Survived by the two sons and two daughters of his first marriage, he died on 30 December 1973 in his home at Lindfield, Sydney, and was cremated with Presbyterian forms.

I knew one of J.A. McCallum’s offspring, Douglas McCrae McCallum (1922-1998), who was Professor of Politics at the University of New South Wales and supervised my undergraduate honours thesis. In my first year of university, during one of his lectures, I saw proceedings interrupted as Doug received a note advising that his father had died. In part, remembering his father, was one small way of saying thank you to my former teacher. A much better and comprehensive assessment of McCallum Snr, however, was to be published after mine – namely, Ann Curthoys, ‘McCallum, John Archibald (1892-1973)’, The Biographical Dictionary of the Australian Senate, Vol. 2, 1929-1962, Melbourne University Press, Carlton, Victoria, 2004, pp. 451-457.