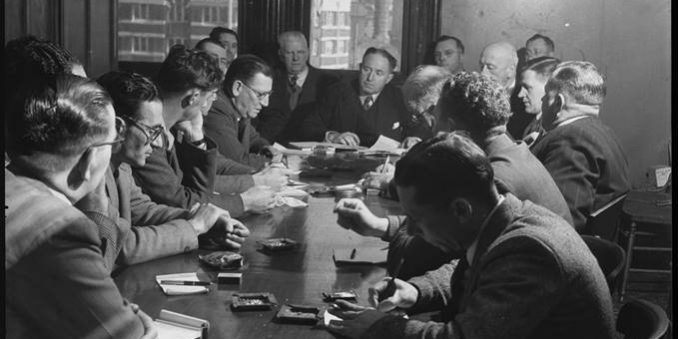 Educated at the Patrician Brothers’ School, Glebe, 14-year-old James started work in a felt-hat enterprise. At the Church of Our Lady of Mount Carmel, Waterloo, on 8 November 1926 he married 19-year-old Bessy May Kenny with Catholic rites. About 1928 he joined the Australian Glass Workers’ Union; he was successively State secretary (1936-47), treasurer, federal secretary and State president (1950-67).

A delegate to the Labor Council of New South Wales in the 1930s, he aligned himself to the group centred on R.A. King. Kenny was elected vice-president (1945), president (1946) and, a few months later, assistant-secretary (re-elected until 1958). He began to wield significant influence and was credited by B.A. Santamaria in his autobiography, Against The Tide (Melbourne, 1981), with being a major force supporting the industrial groups in the mid-1940s. Kenny ensured that no union affiliated with the Australian Labor Party in New South Wales switched its allegiance to the Democratic Labor Party – unlike in Victoria.

Despite his anti-communist beliefs – he had denounced the miners’ leadership for the 1949 coal strikes – Kenny opposed the Menzies government’s proposal to ban the Communist Party of Australia. Although he regularly broadcast on radio-station 2KY, he gained most of his popularity from industrial campaigns and from his involvement in disputes in the metal, steel, building, construction and coal industries. In the early 1950s he cautiously advocated incentive payments in Australian industry, a measure fiercely opposed by many sections of the labour movement.

Kenny was a member (from 1948) of the Legislative Council, an executive-member (1951-57) and vice-president (1957-67) of the Australasian Council of Trade Unions, and junior vice-president (c.1952-57) of the federal executive of the ALP. He served on the Commonwealth Immigration Advisory Council, the council of the University of New South Wales, the Technical Education Advisory Council, the Sydney Opera House and Sydney Cricket Ground trusts, and the Commonwealth Ministry of Labour Advisory Council. Widely travelled, he was a delegate to conferences of the International Labor Organization, held in Geneva (1954 and 1964), the New Zealand Federation of Labour (1956 and 1962) and, controversially, the All-China Federation of Trade Unions, Peking (Beijing, 1957).

In 1958 Kenny succeeded King as secretary of the Labor Council. His main achievement was to promote better industrial conditions, including long-service leave, workers’ compensation and associated benefits. He was involved in public protests against the régime in South Africa, campaigns for higher wages for Aboriginal workers, and peace and disarmament rallies. The American vice-president Richard Nixon had visited him in October 1953 at his cramped offices in the Trades Hall. In the 1960s Kenny commissioned the purchase of land and raised funds for the development of a new Labor Council building in Sussex Street. He was general manager (from 1960) of 2KY, and a director of Television Corporation Ltd (forging close relationships with the Packer family) and of Air Sales Broadcasting Co. Pty Ltd (radio 2HD, Newcastle).

An appealing leader, Kenny had the common touch and won grudging respect from his most bitter opponents. He died of coronary vascular disease on 12 October 1967 at his Maroubra home and was buried in Waverley cemetery. His wife survived him, as did their son Alan who worked (1962-88) at the Labor Council as a property manager.

Marilyn Dodkin, in her essay on Kenny in Brothers, suggests that at some point Kenny had an intimate connection with ASIO and, possibly, with the Americans. The evidence for such propositions is non-existent.

Bob Santamaria in his memoirs attributes to Kenny a major role in the early 1940s in the formation of the ALP Industrial Groups and the involvement of the Catholic Church in marshalling support for the “Groupers” in wresting control of various unions to ALP supporters, away from communists and their supporters.

No doubt some of the American Labor Attachés working in Embassies and Consulates in Australia took a deep interest in such things. Apart from funding “Leader Grants” for travel to the United States to meet unions there, as well as the cultivation of contacts, friendship and inside knowledge on the domestic scene, it would appear that US involvement in the Australian union scene was limited, benign, and of the non-spook type.

(In the 1950s to the Reagan era in the early 1980s when this discrete function was phased out, the US invested in a corps of officials in the State Department, posted around the globe, many of them ex-union — “labor union” in US parlance — officials who actively followed developments in trade unions and industrial relations more generally in host countries. Very reasonably, given the vitality and importance of unions in most countries in the period including, frequently, ideological battles within and between industrial organisations, understanding such things was important. In France, Italy, and some other flash-points in the Cold War, there is evidence of active engagement by the Americans in funding particular candidates and organisations. But so far, in Australia, no gun or “smoking gun” evidence has been found. Though, obviously, some lefties – and now Dodkin, who is not from the left – think there must be evidence somewhere, and “draw the dots” claims abound.)

After the ALP Split, Kenny would seem to be disoriented on the ideological front.

When I was at the Labor Council I found in our archives a ‘more in aghast horror than anger’ letter from Joe Riordan, then the national secretary of the Federated Clerks Union, complaining to Kenny about his leading a union delegation to China in late 1957 or 1958. Riordan pointed out that all the official unions in China were fake, not independent, and controlled by the communist party. What was someone of Kenny’s background doing in lending legitimacy to such sham organisations? (I am not sure if this letter survived. Apparently, lodes of material was left behind when the Labor Council office moved to the Trades Hall. The national office of the Australian Workers Union took over the tenth floor of the Labor Council building, where the Labor Council offices once were, and Paul Howes told me around 2007/8 that he read the letter, left behind from the move. I reached out to his successor, Scott McDine, to see if anything survived. But I never got a reply. McDine resigned from the union in 2016. I shudder to think what other material and files were thrown out or left behind, instead of deposited with the State Library or other archival collections.)

On other occasions in the late 1950s, Kenny was giving speeches at “peace” conferences, where some of the pro-Soviet unions were active, sometimes overtly and other times in the background.

Dodkin, as she elaborates in an interview, post publication of her book, suggests that Kenny’s visit to China and subsequent speeches at union- and leftwing- sponsored “peace” conferences, together with what she found in Kenny’s archives on details of activists in the peace movement, indicate that Kenny was spying for ASIO. As she puts matters:

And my argument is: here’s a man, a fervent right-winger who goes to Peking at a time in 1957 when no right wingers are going to be seen there, meets Mao, comes back and starts going to peace councils and becoming a leading figure in the peace movement. Why aren’t there any other ASIO files on Mr Kenny? Everybody else in the peace movement was investigated. They couldn’t move without ASIO knowing what they could do. And why, especially in 1956 is he speaking out against foreign involvement in Vietnam? Why aren’t there any other files on him?[1]

I agree it was passing strange, this occasionally frenetic, friendly attachment to “peace”. But there are simpler explanations to what is offered. Additionally, I find the argument that because there are no files or limited files in the archives on X, who must have been followed or known or of interest, that ergo that person must have been a spy or co-operator with the intelligence agency, who “must” now be protecting them by concealing evidence.

I see Kenny’s actions as indicative of part of the humiliation of Kenny and the Labor Council officers in the post-ALP split era, and suggestive of their desperate attempt to starve off a left-wing takeover of the labour movement in NSW.

Visiting China antagonised some of the ALP and DLP right. Curiosity might have been one motivation, as well as signalling to the broad left in Australia, independence from erstwhile allies.  Speaking earnestly at “peace” conferences is usually an occasion to sound harmless and nice. Who is not in favour of peace? Kenny might have thought he was playing safe, playing for time, minimising factional enmity. It is not what I would have done. Or not in the same way. But there is some logic to what Kenny was doing if also, it must be said, with a touch of fear and cowardice.

A key union was the Building Workers Industrial Union, that was under the control of communists, who nonetheless respected the Labor Council’s sincerity and diligence in dealing with intra-union disputes and, as well, with the Master Builders Association, other employer bodies, and large employers in the construction industry. Kenny got on with them.

Continuing to play a fair-dealer relationship with that powerful union, lowered the ideological temperature and lessened the ardour of the left to try to take over the Labor Council.

In the mid-1950s, the Labor Council officers at the Labor Council Thursday night meetings, even publicly argued that politics was for the ALP and others, and the union movement needed to be as united as possible and eschew factional stoushes.

In actual fact, a dual game was going on, with the Labor Council officers raising money for union election campaigns to protect their base. There was nothing passive about defending this patch. But on ideological issues, within the labour movement, there was a great deal of passivity, at least publicly.

The claim that Kenny “spied” for ASIO, on so many levels, is absurd.

It was a much more confident NSW Labor Right that emerged in the 1960s. There was no longer a skerrick of Finlandization.

Ducker even went on holidays on a Russian cruise liner in the late 1970s.

In contrast, Unsworth was much more ideological, in the anti-communist labourist tradition, and overt in challenging the left, fellow travellers, and communist influence.

Perhaps that is the defence of Kenny’s apparently odd actions in the late 1950s onwards. He kept the show together, minimised antagonisms, and enabled others to live to fight another day.