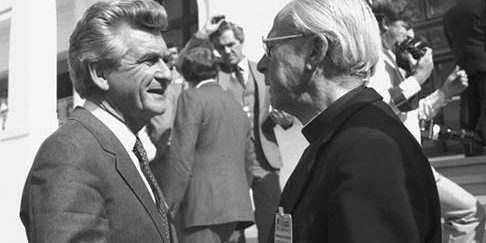 Archbishop James Carroll left no memoirs, generally refused interviews with historians and was very guarded about what he said about his role in some of the significant events in the ALP’s and Australia’s political history.

Some months before he died, His Grace presided over the memorial service to the late Reg Downing, the longest serving Cabinet Minister in NSW’s history and a member of the NSW Labor ministries from McKell to Renshaw, from 1941 to 1965. This memorial service recalled the close friendship between Archbishop Carroll and key figures in the ALP.

Although his death occasioned observations about Carroll’s legend as the saviour of the NSW Labor Party during the Great Split of 1955-1957, it is grossly inaccurate to portray the Archbishop as a partisan politician in clerical garb. Indeed, he was slightly embarrassed by the attention paid to his involvement in the ALP split and the election of the Whitlam government. The kingdom he strove for was not of this earth.

In the circumstances he found himself he acted decisively, even ruthlessly, which is not to say that he acted without scruple. Of course, the rights and wrongs of the events he became immersed in were painful and required much contemplation.

I met him a number of times over the years. In the mid-1980s I was appointed by the then NSW Minister for Education, Mr Ron Mulock, to chair an inquiry into the funding formula for non-government schools in NSW. We had a few discussions about the sectarian debates concerning State aid in the 1950s, 1960s and 1970s and the positions he sought to advance in the Church’s interests on educational issues. It is here that his long term influence on Australian public policy was most decisive – although it is legitimate to ask whether some of the fruits of his efforts are recognisably Catholic in any meaningful sense.

The best account of the ALP split and its impact on the Church is Mr Gerard Henderson’s book Mr. Santamaria and the Bishops. Here Henderson accounts for the split within the Church, which predated Dr Evatt’s attack on the Movement in October 1954.

Henderson sees things critically – emphasising the fanatical mistakes of the Movement supporters in Melbourne which led to all sorts of tactical mistakes during the split. Henderson suggests, however, that even if the wiser counsel in NSW minimised the split in that state (and therefore minimised the consequent isolation of Catholics from public life) the NSW cause was tainted by the clerical authority exercised by Gilroy and Carroll, who was appointed Auxiliary Bishop to the Cardinal in February 1954. In other words, this argument is that whatever might be Mr. Santamaria’s rights and wrongs, at least he led a lay organisation inspired by Catholic principles. Further, such an organisation ought to be free to decide its own policy.

In contrast, the Sydney line was that Catholic Action organisations, including the Catholic Social Studies Movement, should be under strict episcopal control. Henderson suggests that it was outrageous that clerics should have intervened about issues that more concerned Caesar than God.

This, ironically, is also one of Mr Santamaria’s criticisms in his memoirs Against the Tide. Although Mr Henderson, in his usual skeptical way, highlighted the mistakes, extravagance and over reaction of the various sides in this dispute, he is at one with this criticism.

Admittedly, the contest in 1955/58 between the Sydney and Melbourne positions which was decided by the Vatican in favour of Sydney (which led to the closure of the Movement as an official Church body) suggests that there was some deep, arcane dispute concerning episcopal authority that lay at the heart of the Sydney position.

To interpret events in this way, however, is to adopt a too narrow approach.

Part of the Sydney position was that the Church’s evangelising role would be eroded by Catholic Action’s over-concentration on union and ALP factional politics. (This position should not, however, be confused with any soft-headed ideas of ‘living with the communists’.)

Also, in the mad, bitter days of the ALP split in 1955-1957, there were some bishops and priests prepared to thunder from the pulpit that voting Labor would be akin to supporting a communist-influenced body and would thereby be akin to a mortal sin.

Such assertions were then and now a scandal and undermined the credibility and authority of the Church.

In addition, the legacy of sectarian bitterness in Sydney has to be remembered. For all that might be said about ‘tinsel town’, Sydney (then as now) is a more religious city than Melbourne. In the 1920s – with the Sister Ligouri scandals and so on – Sydney was a more intolerant society, sectarian contests more open than in sedate Melbourne. Earlier there was the memory of Premier Parkes’ boast that he would destroy Roman influence in the school system.

Carroll was in the tradition of Sydney churchmen from Cardinal Moran’s time onwards: eager to consolidate the church’s authority especially through church schools, more interested in personalities than parties, determined to influence lay Catholics in the ALP in a reformist rather than a socialist direction. The Sydney style was not charismatic (like Mannix in Melbourne) but solid, cautious, persistent. The men in this tradition preferred to work behind closed doors rather than more openly.

Carroll’s active involvement, including the counsel to priests that the Cardinal’s desire was that the split not occur in the ALP, has to be seen in that context.

In this great issue, events forced Carroll to become a player. He did not relish the fight but neither did he shy away from it.

Some of Carroll’s more colourful detractors, such as the poet James McAuley alleged that Carroll had confused Room 32 (where the NSW ALP’s headquarters were located in the Trades Hall in the 1950s) with the Upper Room of the Last Supper.

Certainly it is true that Carroll helped to keep the tribe together in NSW. Premier Cahill relied on him. Reg Downing also sought Carroll’s counsel along with, for example, Jim Kenny, the then Secretary of the Labor Council of NSW.

Carroll, however, recognised the damage being done to the Church. One of the long-term consequences was to undermine evangelical Catholic activity.

In the years after the split, Kevin Kelly – a founder of the Campion Society and Catholic Action in Melbourne – would write articles in the (Sydney) Catholic Weekly defining and defending the Sydney position on the role of Catholics in civil society.

One of Kelly’s regrets, as he told me in the early 1980s, is that many non-Catholics had no idea of the love that lay at the heart of the Church’s teaching. When John Sendy’s book Comrades Come Rally was published in 1982 – the reminiscences of a ‘red’ veteran – there was no mention of the religious dimension of efforts of lay Catholics to shape social and labour policy. In this context, Kelly wondered if the emphasis on factional warfare was the heart of the problem in the Movement in the 1950s.

In any event, Carroll did not like the consequences of the split – the brief rise in sectarian fervour, the diminishing of active Catholic influence in Australian politics and, for that matter, the return to power of communists in some unions. Many Catholics within the Movement saw Carroll as someone who had betrayed their cause. He would never be a popular choice for the Cardinal’s red hat.

But if he was blocked from that course, it may well have been for the better. Carroll’s most significant role was in the educational field.

On educational issues, the ALP was convulsed in the 1960s by debates over the funding of non-government schools. The Heffron Labor government was warned by the ALP Federal executive in 1963 that funding of parish schools would be a breach of party policy. Whitlam’s contest with Cairns for the leadership of the ALP in this period also had a strong undercurrent relating to ‘State aid’. Whitlam was in favour of a ‘means test’, Cairns was for nothing at all – the state schools were there for everyone and were the only schools entitled to public support. In 1962, for example, Cairns argued in an article in Dissent magazine that no socialist could support government funding to church schools.

The Heffron NSW Labor government proposed the funding of science laboratories and to pay a means tested allowance to parents in third, fourth and fifth form in non-government schools. Mr Graham Freudenberg in his 1988 McKell Lecture reflected on the events that followed: “… the Federal Executive meeting in Adelaide, reacted swiftly – and in a way almost invariably in the Federal Executive between 1955 and 1968 – catastrophically, for the Party. The NSW government was ordered to recast its Budget ‘to conform with Federal policy’. It succumbed to Chamberlain [the leftwing, sectarian national secretary of the ALP] in October 1963. It succumbed at the polls in May 1965.”

The times required insights into the political processes and the possibilities of achieving a bipartisan consensus on state aid.

Carroll played an important role and wrote a pamphlet on state aid, Independent Schools in a Free Society. As episcopal vicar for education and in his other roles in the Church on educational issues, Carroll, from the mid-1960s, dealt with Liberal and Labor politicians on educational matters. The Church’s interest was to ensure that one of the major parties did not adopt a militant or even a polite opposition to the funding of Church schools.

One reason why Australia has the highest number of students attending non-government schools (mostly Catholic) of any country in the OECD is due to Carroll’s impact on his contemporaries.

In 1972 on the eve of the Federal election, Carroll uttered a statement that came to have repercussions. He stated at a parish function at Mona Vale that voters could choose to vote for either the ALP or the Liberal-Country parties, confident that the major parties were committed to reasonable education policies.

This was a vindication of what Whitlam and his future Education Minister, Kim Beazley, fought for within the ALP. What Carroll said was not a partisan endorsement of the ALP. It was an objective, reasonable statement. So why did he do it?  Partly because he believed it was the right thing to do. Also, His Grace was concerned about the remarks of, for example the Bishop of Bendigo, Bishop Stewart, and other DLP-influenced clerics who thundered about why it would be wrong for Catholics to vote for the ALP. (Bendigo was one of the seats Labor lost at the 1972 election – an election more narrowly won by Whitlam than most observers expected. Labor’s shadow minister for education was the defeated member there.)

Carroll was not a hail-fellow-well-met person, he lacked a boisterous personality; but he was a personable man who wielded enormous influence especially in the educational bureaucracies established by the Church. His intense interest in politics was also matched by a love of sport, including cricket and rugby league. Always he strove, no doubt imperfectly, to protect the Church’s influence, integrity and, most of all, her interests. He deserves to be remembered with affection. At his recent funeral, the presence of former Education Ministers, such as John Dawkins, Sir John Carrick, Dr Terry Metherell and Mr Rodney Cavalier, illustrated that all sides of politics respected his sincerity and his accomplishments. The issues he fought for have to be understood in the wide context of the circumstances that forged his determination to act and to fear not.

Carroll’s influential 1961 booklet Independent Schools in a Free Society articulated the case for what came to be called ‘State Aid’. The latter battle, including Carroll’s role, is comprehensively discussed in Michael Hogan, The Catholic Campaign for State Aid. A Study of a Pressure Group Campaign in New South Wales and the Australian Capital Territory, 1950-1972, Catholic Theological Faculty, Sydney, 1978.

Carroll was an auxiliary bishop of Sydney from 1954-1984, having been promoted to titular Archbishop of Amasea in 1965.