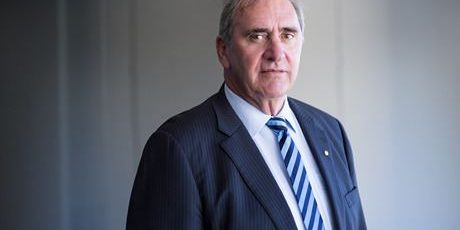 Article submitted to the Australian Financial Review on 20 June 1994.

“Jumping Jack” Fahey is a good bloke. The polls show he is popular. But you can forget about him winning the next NSW election. It will not happen.

Why is this inevitable? Surely Fahey’s appeal is very solid. He is streets ahead of Opposition Leader Bob Carr as preferred premier – according to the polls.

Sure. But that is not why Premier Fahey is political dead meat. It has everything to do with Labor’s strategic nous in concentrating resources and effort in key marginal seats. The Liberal machine’s amateur-hour approach to politics does not help. And Fahey’s inability to project a solid image on policy issues is a handicap.

Some readers will reject this analysis as tainted by Easson bias. Nonsense. There are many reasons why Labor will win at the polls due in March next year.

First, Labor is already close to government. Labor needs only three seats to obtain office in its own right. None of Labor’s marginal appear in danger. The one seat where Labor might have had a problem, Parramatta, where a by-election is due soon, illustrates the point. Incredibly, despite knowing the sitting member was dying of cancer for twelve months, the Liberals did not have a candidate ready for Labor’s most marginal seat. Labor’s candidate, Ms Gabrielle Harrison, the widow of the former member, is achieving very positive publicity. Opposition Leader Bob Carr has spent every week (apart from his Christmas vacations) in the electorate for the past twelve months. The recently selected Liberal candidate is a lemon. She has made crass, damaging statements about Ms Harrison staying at home to look after her kid.

Second, the opinion polls are not a good indication of success at the next state election.  Nick Greiner, after all, achieved an easy two-party preferred vote lead over Labor in the 1991 poll. But he almost lost. The reason has something to do with electoral demographics. Large conservative majorities are locked-up in North Shore electorates. And the last electoral redistribution has a part in the story as well.

It is also instructive that former Premier Barrie Unsworth had a higher personal opinion poll popularity than John Fahey did at a comparable time a year before the election was due. Unsworth was badly defeated at the 1988 elections. John Fahey’s huge lead in the opinion polls earlier this year – in the aftermath of the Olympic win – may not amount to much by the next election.

Third, there has been no redistribution since the last poll. The last redistribution in 1990/91 created something very unexpected. Premier Greiner appointed a retired judge to preside over things. Only one problem. The Macquarie Street ‘rat pack’ delighted in revealing that the man chosen for the task was treasurer of the NSW Branch of the Liberal Party when Premier Askin made his first judicial appointment in 1966. Of course he and his fellow two Commissioners did a first class job based on the evidence presented. The result? Boundaries that gave Labor an advantage. Hence, the close result in 1991.

Fourth, the Liberal machine is as weak as ever. The current problems in Parramatta highlight this. One reason why the Liberals fared poorly in the last state redistribution is lack of homework. The ‘science’ of redistributions is about convincing the Commissioners, through written submissions and oral argument at public hearings, why this street, this suburb, this boundary line, should be within the bounds of a particular electorate. Political parties have the job of selecting bits of information and knowing how to use it. But if you do not know what you are doing, you will have limited impact. Sooner or later the penny has to drop. The Liberal machine has not been just unlucky. It has been hopeless in recent redistribution submissions and hearings in NSW.

Sixth, Labor knows that the campaign in key marginal seats is all that matters. Labor’s local efforts in Camden (led by the former local MP, Peter Primrose, who is standing again) and Blue Mountains (where Labor’s candidate is former local MP and Wran and Unsworth governments minister, Bob Debus) are particularly impressive. The Liberal’s chance of holding Blue Mountains is gravely damaged by publicity given to the local MP’s recent court appearance, over alleged death threats to a local councillor. In Badgery’s Creek, Labor’s candidate is the Mayor of Penrith and she is performing well.

Seventh, John Fahey is not getting his message across. His dismissal of the vision thing as “bullshit” has some truth to it. A lot of corporate strategy documents, for example, can be turgidly wordy. But this did not stop Nick Greiner marketing himself as different to NSW Labor: “NSW Incorporated” and “warm and dry” were two themes that helped the Liberals to power. (Incidentally, it is a myth that Greiner was a hopeless politician. He had some considerable failings. But it is also true that he is one of only two conservative leaders in NSW politics to beat Labor in the last fifty five years. Watch for the general re-assessment of his political skills after the Liberals are defeated at the next elections.) The problem with John Fahey’s leadership is not a healthy scepticism about advertising slogans and superficial themes. It is not clear why he is premier, what he stands for, and what he wants to achieve.

Finally, a decisive win rather than a narrow victory cannot be ruled out. Bob Carr might never be personally very popular. But he is clever enough to articulate some policy approaches that neutralise the efforts of the government in some important areas, such as education and law and order. They are two areas where the Opposition is stealing some of the government’s thunder, as the premier acknowledged in his address to the National Party last weekend. And Labor’s concentration on marginal seats like Maitland, Gosford, Murwillumbah, and Sutherland could net those also. So, Labor’s concentration on certain policy issues (health continuing to be a big problem area for the government) and local campaigns, position it well.

Once all this becomes more widely understood, the electorate – tired of a hung parliament with the balance of power with three independent MPs – is likely to want to give a decisive majority to the in-coming administration.

In politics, there are no certainties. Remember the unlosable 1993 federal elections? But there are such things as good bets. Demographic factors alone mean that Carr only has to do as well as he did last time to become Premier. If the TAB would allow it, you might as well bet London to a brick that Bob Carr will be NSW Premier by this time next year.

I feel sure that when Chris Merritt, the opinion page editor of the Australian Financial Review saw this, he might have winced at such a preposterous argument.

The conventional wisdom was that Carr was lucky in 1991 because Premier Greiner was not good at politics, that Fahey’s appeal ate deep into Labor-voting heartland, that having won the Olympic Games in September 1993 (Fahey was shown on television leaping to his feat and hugging the people next to him in a boisterous show of joy – in a natural way that a sport culture nation liked), the Liberals were unassailable in NSW.

On the Labor side, however, there was hope that they would come close. The foundation laid in the 1991 state election gave substance to the argument.

In the end, Labor scrapped across the line. Once more, the Liberals won a two-party preferred popular vote. This article signaled why that might not be enough.