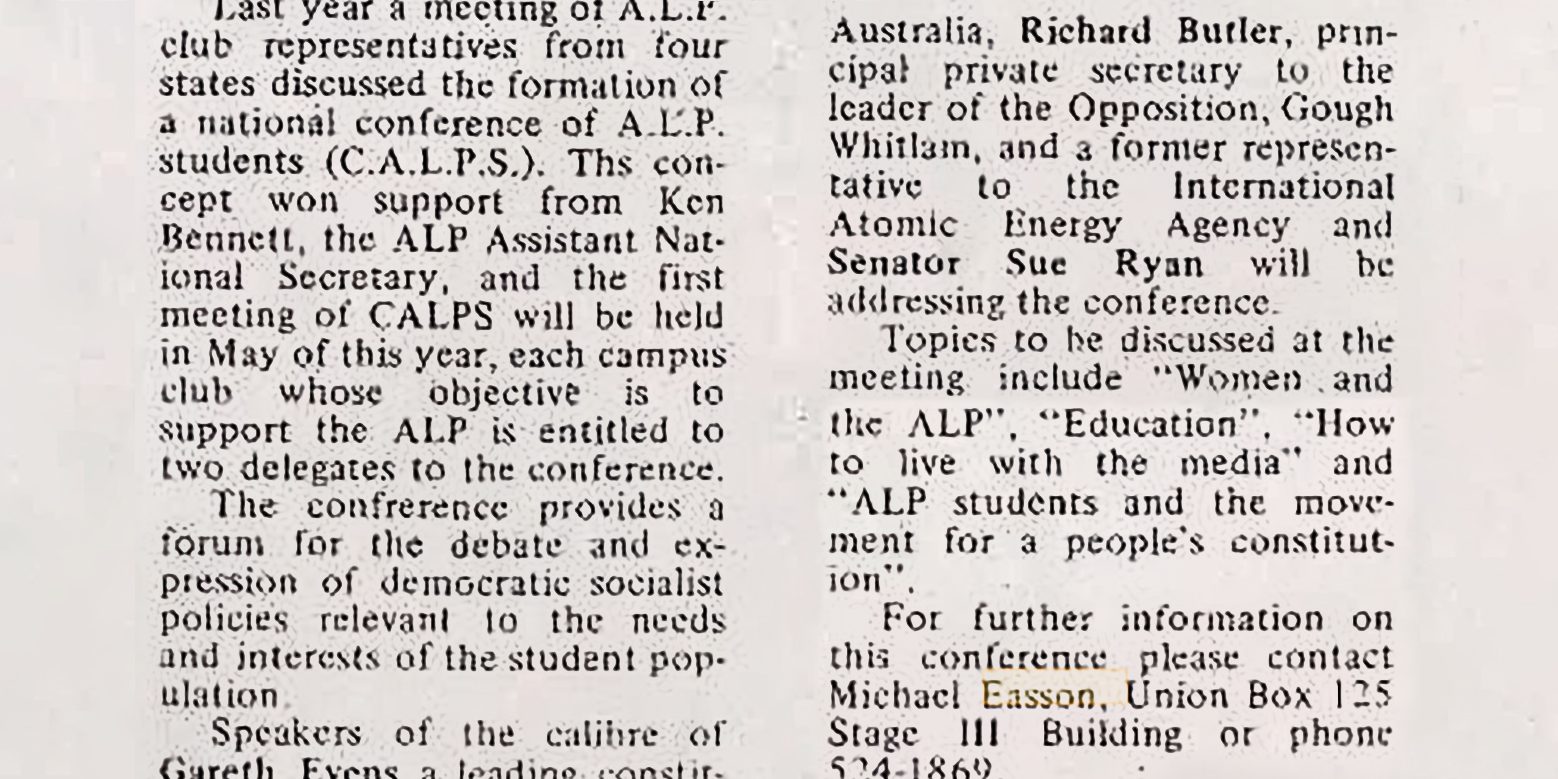 The inaugural meeting of CALPS was held from Thursday May 19th to Sunday May 21st at Melbourne University; each campus club whose objective is to support the ALP was entitled to two delegates to the conference. Sixteen clubs from across Australia were represented but one club, the so-called North Sydney Technical College Labor Club appeared to be a rort. (Since the conference, I have spoken to the Students’ Activities Co-ordinator of the College who said no such club exists.) In the rest of this article I would like to report on a number of the highlights of the conference.

Peter Duncan, the South Australian Attorney-General, officially opened the conference and spoke on what he called ‘the new conservatism’ in the United States and related this to the economic and social policies of the Fraser government. On the same day, Ken Bennett, the ALP Assistant National Secretary, delivered a discussion paper titled ‘Labor Youth – A Rethink’ which was based on an article he wrote in the Melbourne ALP students’ magazine Polemic. Bennett raised the question whether Australian Young Labor (AYL) is ‘an effective youth movement’ and stated: “On any comparison with European Socialist Youth Movements, it is difficult for AYL to maintain with credibility that it is representatives of Australian youth”. Allowing for the vagueness of the term “representative of Australian youth”, I think that this is a reasonably accurate appraisal of a national youth movement which commands a little over 2,000 members. Bennett proposed three options for the future of AYL:

i) to continue “on its present path, but upgrading the organisational machinery” – perhaps by the National Executive providing some finances and the services of a full-time officer;

ii) to follow the model of the Labour Party Young Socialists in Britain, where “the movement is organised in branches at the constituency level, and is entitled to representation at the constituency, regional and national levels of the Party”; and,

iii) to allow AYL “almost complete autonomy, freed, insofar as it is possible, from the constraints of those who already exercise power and free to criticise the short-comings, not only in society but also in our own organization.”

Bennett’s paper was also directed to the objectives of AYL and discussed a number of initiatives that Young Labor might follow to broaden its base, particularly within trade unions.  It was a paper intended to raise problems rather than suggest solutions for AYL’s organisational troubles.  Hopefully, Bennett’s paper will stimulate discussion about the future of Young Labor in NSW.

Most of the Friday of the conference was concerned with matters relevant to the Australian Union of Students (AUS). The whole proceedings were marred by a number of motions attacking Michael Danby, a leader of the proponents for a more democratic AUS. Presently, the office-bearers of AUS are not directly elected by the students, rather, they are elected under the corrupt collegiate system of voting which ensures that the officers of the Australian Union of Students are elected only by delegates from the various affiliated campuses. Most of these delegates are not even elected by the students they purport to represent; in some cases, the delegates from country campuses are determined by whoever first arrives at the Annual Conference of AUS! Recently, there was a referendum of tertiary students concerning the proposal to directly elect the officers of AUS; 20,000 students voted, 15,000 in favour and only 5,000 against the proposed reforms. Despite this astounding rebuff to the AUS electoral system, the executive of AUS decided that because a number of campuses did not vote on the issue, they should be counted as opposing the amendment to the AUS constitution! Hence by a trick of interpretation of the AUS constitution those reforms were defeated. The collegiate system has ensured that AUS has fallen into the hands of fanatical extremists who are unrepresentative of the student members of the Australian Union of Students. An example of this is the demand by AUS that tertiary students be paid the minimum wage (which is currently about $100.00 a week). Quite naturally, nobody takes seriously these inflated demands, especially when one considers that there are other sections of the community who deserve priority for the limited finances of the government. This is not the place to list the many absurd policies of the AUS, but I think it is clear from what I have written that the unreasonable demands of AUS have ruined its effectiveness to lobby on behalf of the students it is supposed to represent.

The CALPS conference, however, passed a motion against “direct elections” for AUS and Peter Tullgren, a delegate from the University of Newcastle Labor Club, moved a motion alleging that those who were involved in the campaign to reform AUS were linked to the NCC, the Liberal Party and the reactionary press. An amendment was moved to condemn Michael Danby for the crime of linking the ALP name to the campaign for direct elections for AUS. I moved a procedural motion that the matter be held over until the following day so as to provide Michael Danby, who was not present at this time, the opportunity to attend the next day and speak in his defence. The procedural motion, however, was defeated and the amended motion carried. Later that day another motion was moved stating that “this conference expresses its abhorrence and total condemnation of Michael Danby” because of his alleged “continued liaison with the Commonwealth police from September 1975 to April 1976 in revealing printed matter that may have incriminated students” and “his continued relations with the Murdoch press by giving student files to Phillip Cornford”. I moved a procedural motion to provide Michael Danby an opportunity to defend himself.  Again, the procedural motion was defeated and I spoke against the wild accusations contained in the motion. I would have thought it elementary of members of the Australian Labor Party that they would champion the principle that it is the right of anyone whose honesty and credibility is challenged to be permitted an opportunity to defend himself. The character of the proceedings against Danby, however, simply smacked of a Stalinist show trial; the imputation that Danby was a ‘police agent’ only added a little local charm to the whole affair! I hardly think that the reputations of delegates such as Peter Tullgren, Sandra Wall or Ian Gallaway, as defenders of civil liberties within the party, could have been improved with their opposition to my procedural motions and their support for the absurd trumped-up charges against Michael Danby.

Concerning the AUS issue, it should be noted that the Victorian branch of Australian Young Labor and, more recently, the NSW branch of the Labor party have passed resolutions supporting direct elections for the office-bearers of the Australian Union of Students. It is therefore difficult to understand the force of the argument against Danby “for linking the ALP name” to the moves to reform AUS!  It should also be noted that the motion smearing Danby as a ‘police agent’ is based on an article which appeared in the student rag National U.  Recently, the executive of the AUS apologised for the publication of this article, which was published without the authority of the President of the AUS, and they stated that the allegations contained in the article were completely false. (I understand that the editor of National U has since been removed from office after a national referendum of university and college of advanced education students.)  So much for the Danby issue: The rest of the conference was characterised by a reasonably high standard of debate concerning such matters as the economy, student allowances and the federal leadership issue.

Ralph Willis, the Shadow Minister for Industrial Relations, spoke on the Friday night and dealt with the Fraser government’s proposed [Industrial Relations Bureau] IRB legislation. On the following day, Senator Sue Ryan addressed the conference on education; on the Saturday Gareth Evans, the Melbourne convenor of Citizens for Democracy and an ALP endorsed Senate candidate for Victoria spoke on “the movement for a people’s constitution”.  Most of the Sunday was taken up with discussion concerning the constitution and future organisation of the national conference of ALP students, and there was a paper delivered by Ian Baker, currently Associate Producer of This Day Tonight, on “living with the media”.

Although I had met Michael Danby briefly in 1976 in Sydney, I did not know him terribly well. But the vilification of him and denial of natural justice inspired me to defend him and to get to know him better.