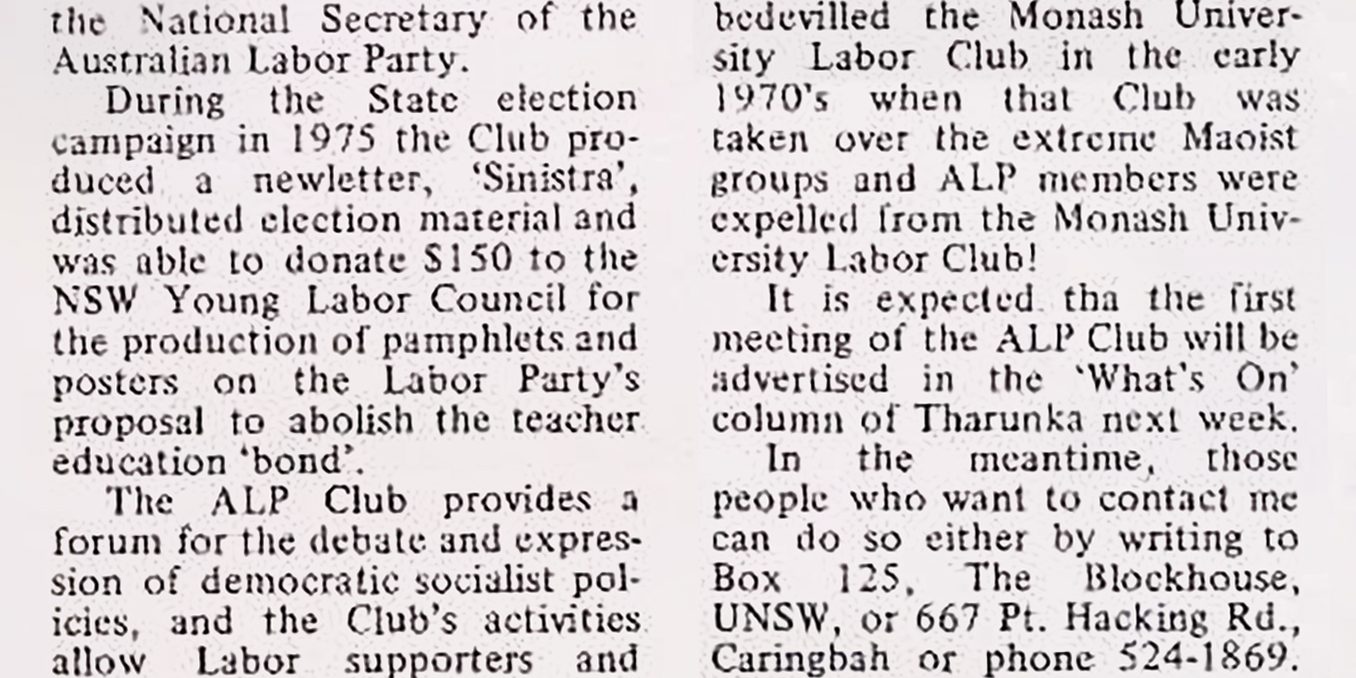 The UNSW ALP Club normally meets fortnightly, and its meeting time and venue is advertised in the ‘What’s On’ column.

During the State election campaign in 1975, the Club produced a newsletter, ‘Sinistra’, distributed election material and was able to donate $150 to the NSW Young Labor Council for the production of pamphlets and posters on the Labor Party’s proposal to abolish the teacher education ‘bond’.

The ALP Club provides a forum for the debate and expression of democratic socialist policies, and the Club’s activities allow Labor supporters and politicians to be informed about the opinions of the student population.

The strength of the Club depends on the involvement of its members; in order that the Club meetings be successful, the membership must ensure that its activities are well publicised; the requirements of pamphleting and papering the university with notices is a job for all Club members.

The membership of the Club is open to all ALP members and supporters; the Club’s constitution, however, provides that the executive (President, Vice-Presidents, Secretary and Treasurer) should be members of the ALP. This rule has been adopted so as to avoid the problems which bedevilled the Monash University Labor Club in the early 1970s, when that Club was taken over by the extreme Maoist groups and ALP members were expelled from the Monash University Labor Club!

Michael Lee and I co-founded the ALP Club at the University of NSW.

I only have a vague recollection of the newsletter Sinistra (an Italian word meaning inclined to the left hand) and I am not aware if any copies survived anywhere.

At an ALP Club meeting on 31 March 1976, I remember Senator McClelland speaking. I asked about Whitlam with the then ALP National Secretary David Coombes and far left Victorian ALP figure Bill Hartley (1930-2006) bizarre attempt in 1975 to raise US$500,000 from the Iraqi Ba’athist government to help Labor’s 1975 election campaign. He paused and said that in the stress of the dismissal you had to concede that for Whitlam to entertain this idea, it must have been a moment of insanity. But McClelland argued that he should not be judged by that mistake alone.

We polled Club members about their policy interests and created policy fora, none of which were very active.

One thing I wanted to avoid was endorsing candidates for student elections. I thought then that it would be a sure fire way to factionalise the Club, with some using the organisation for personal gain, rather than for the broader objective of maximising the ALP’s reach on campus.

In reaching that view, I was conscious that when I first went to university in 1973,I discovered that the pro-Maoist supporters ran the club in 1972 and used it as a vehicle to take over the students’ union. In 1973, they shut down the Club as it had served their purpose. In 1974, Jim Rannard and my brother, Shane, tried to set up a Labor Club, but at their inaugural meeting the Democrat Club (National Civic Council supporters) tried to wrest control in order to get their candidates endorsed by the Club. In the end, the Labor Club fornmation was aborted. When Lee and I set up the ALP Club, we wanted membership limited to ALP members and supporters.