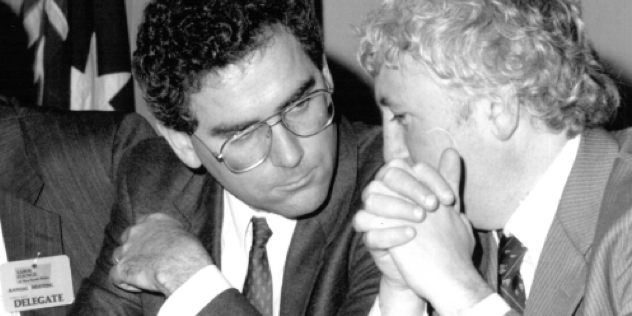 Sometimes the smartest industrial tactic is to appear crazy. That seems to be the most favourable explanation for the recent behavior of ACTU secretary Bill Kelty.

Obviously he must be working to a calculated game plan with the new government. Or is he? What ought to be the future direction or Australia’s union movement under a conservative government? Are the ACTU’s current actions a sign of what’s to come?

At this week’s ACTU executive meeting, there will be plenty of discussion about the right path to follow. A lot of criticism (mostly in the corridors and during the lunch breaks) will be made about the style of Kelty’s bluster over the last week.

But it would be a big mistake to imagine that Kelty has transmogrified into an Australian version of Arthur Scargill, spoiling for a battle he cannot win.

A more likely explanation is that the ACTU leadership wants to bring home to the new government the fact that weakened though the movement is, the unions still have enough firepower to be taken seriously. That’s why there is the smell of gunpowder.

Also, there’s a sober message. The Australian government ought to want some kind of understanding with the ACTU on inflation and wage targets.

Kelty has taken the government by surprise. That’s part of the plan.  In the post-Accord, conservative government era, the unions are throwing a bit of a tantrum. But they want attention far more than a fight.  So far the government has resisted the tempation to knee-jerk and kick back.

However, some of the troops are worried that Captain Bill is sounding like the Charles Laughton version or Captain Bligh in the film version of “Mutiny on the Bounty”. That wasn’t meant to be part or the script!  But it’s too early to lower the life rafts.

If it is accepted that Kelty’s record is that of a responsible Australian labour leader, something that the past 13 years seem to demonstrate, then he is either suddenly acting out or character, unhinged by the election result. Or is this a part of a deliberate, if apparently clumsy, operation?

Why [would he] carry on [at the helm of the ACTU]? Because Kelty believes that a free labour market is the route to mayhem. The last Accord linked moderate wages growth, consistent with low inflation (the parties agreed to an underlying inflation target of between 2 and 3 per cent over the life of the Accord), training and employment assistance to the unemployed, social wage measures (the protection or Medicare, the further allocation of resources for childcare and family allowance support measures), the protection of low wage earners through the award system and enterprise bargaining.

All of those principles are consistent with what the then Opposition proclaimed as in keeping with its policies in the lead-up to the recent election. The major clear differences between the ACTU and the new government are over the role of unions in the determination of enterprise agreements and the oversight or the Industrial Relations Commission in this process.

The other major differences may be the attitudes that the new government has concerning the ACTU leadership. The ACTU wants to test the resolve of the Howard government on the “Accord package”. Like it or not, the unions in some industries can have a significant impact on wage outcomes, inflation and therefore the fragile recovery.

Perhaps that explains the 15 per cent wage claims in metals, hospitality and other sectors last week. The success of such claims would lead to (in the absence of productivity improvements) higher inflation, lower profits, greater unemployment and escalating interest rates.

An intelligent approach for the new government would be to call an early conference of employers and unions under the Industrial Relations Commission to see if agreement can be reached over similar principles as set down in the recent Accord. In this way the missing partner to previous Accords between governments and the unions – the employers – could be joined.

Because of previous criticisms by the then Opposition, the smell of corporatism about the Accord process, and the understandable reluctance of the new government to do special “priorities of the government” deals with the ACTU, this process will never be officially described as an Accord.

But some kind of agreement or understanding is desirable. An alternative approach might be to seek dialogue with the unions and employers without any industrial relations summits. Such an option is consistent with getting a post-Accord understanding on inflation and wages targets within a system of enterprise bargaining.

At this week’s executive meeting, it has already been foreshadowed that the ACTU will apply to the IRC to adjust the minimum wage rates in the key minimum awards. Peter Reith, the Minister for industrial Relations has indicated his broad sympathy for this application, although he has not said by how much the rates should be adjusted. The new government will want this application to be joined to review of was fixing principles due in June.

The government will also want to get through the Parliament new industrial relations legislation that aims to provide for Australian workplace agreements, free of privileged union and IRC involvement, and subject to minimum standards and the oversight of the employee advocate, a proposed new statutory appointment. The detail of this is yet to see the light of day.

For the unions, the best result of this latest skirmish may be the opening up of a genuine debate about future directions, including an autopsy on the past 13 years. Has restructuring been worth it? What are the functions, structures, personnel and resources required by the unions in the increasingly competitive marketplace for labor market services? Is the price of union membership too expensive? Loyal declarations of support and set-piece factional mud-slinging will not cause those questions to disappear.

This week’s ACTU executive meeting is an opportunity to reflect on short-term tactics as well as the relationship of current activities with long term survival strategies. Both should be on the agenda.

In part, this article was written in response to ACTU Secretary Bill Kelty’s untidy comments in the lead up to the 2 March 1996 federal election won by John Howard, defeating Paul Keating’s government.

Kelty said: “If they want a fight, if they want a war, they’ll have the full symphony, all the pieces, all the clashes and all the music… I am not sure it will be the 1812 Overture, but I will tell you what, Paul, it will not be Mahler either.”

Rather than writing an opinion piece whining about the extravagant rhetoric, I thought it best to put forward an argument as to the rational aspects of what might be Kelty’s positioning.

He was signalling to his own troops that the ACTU would not be pushovers after a change of government, that the restraint of the Accord period was for a reason, in the context of working with the government of the day for good outcomes for all.

Thus the idea of method in the madness…