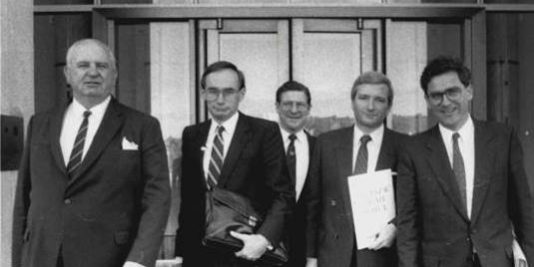 The recent ratification by the Industrial Commission of the 1989 Newcastle Shipbuilding Agreement further strengthens the commitment of the union movement of NSW to win the lion’s share of the $5 billion ANZAC frigate contract for this State.

The agreement, in line with the Federal government’s wage-fixing and award-restructuring principles, builds on the firm base of industrial relations reform and progress which has developed in the Newcastle region in recent years.

The shipbuilding agreement is typical of that progress.

It will result in a more highly skilled and responsive workforce capable of creating a shipbuilding industry in Newcastle of world standard.

In recent months, the Labor Council of NSW and the Trades Hall Council of Newcastle have been running full-page advertisements in major daily newspapers to promote our support for the ANZAC frigate project to be based in Newcastle

The major and recurring thrust of those advertisements has been that the ships will be built “on time and on budget” through a commitment given by the more than one million trade union members of NSW.

In particular, it is a commitment given by the workers and people of the Newcastle region who realise that sound and progressive industrial relations are the key to future employment and business development.

The workers of Newcastle, and indeed all NSW, recognise the value of the ANZAC frigate project in creating jobs, new skills and increased responsibility for the trade union movement.

The union movement in NSW went all out to win this project.

At one stage Nick Greiner invited me to join a helicopter flight to Newcastle for a meeting with the Prime Minister along with the then Mayor of Newcastle, Labor’s John McNaughton, who was Mayor, 1986 to 1995.

There were many trips to Newcastle and to Canberra to persuade the federal government of the merits of building the frigates at the Newcastle state dockyards, where there was a skilled workforce.

The Labor Council posted in the print media advertisements referencing our commitment to get the job done, strike free (through an agreed disputes mechanism) at the Newcastle state dockyards. Radio advertisements were also run. At one meeting with the Prime Minister that the Premier of NSW Nick Greiner, NSW Leader of the Opposition, Bob Carr,  Newcastle Lord Mayor John McNaughton, and I attended, we were fierce in insisting that the Hunter Valley was sick to death of missing out on major defence – or any other major federal government projects.

After one meeting Greiner, Carr and I gathered for a press conference. But where was the Lord Mayor?  I was sent back into the meeting room to fetch him. There he was explaining to Hawkey how much he and his kids admired him. “Could you please sign the back of these photos for my daughters”, he asked. For the Prime Minister, it made it slightly harder to imagine dire consequences from Novacastrians if the contract went to South Australia, as we all feared.

In politics, in life generally, a healthy sense of the absurd can be useful.