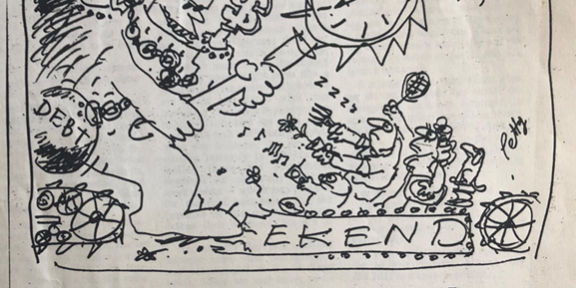 The week after the Easter break is always dull news time. Some stories that would never get a run get the front-page treatment. Clever media junkies know that it is the right time to inject something startling into the public domain.

It happened again last week when Sir Roderick Carnegie solemnly announced that the weekend needed to be abolished.

If Sir Rod has his way, the good old Australian expression “aveagoodweegend” would pass into history as an anthropological curiosity. Does he mean that every week should be Monday to Friday affairs with Saturdays and Sundays omitted? The Carnegie Calendar would have 71 weeks in a year and perhaps Sir Rod would lay off that other idea plaguing his mind – the abolition of four weeks annual leave.

Presumably, my parody will be dismissed as getting away from the serious point to be made about maximising the productive use of resources. Perhaps it will also be asserted that sometimes the best way to make a point is to be bold and to exaggerate.

But really there is no coherent point made by Sir Roderick about weekend work.

The reality is that many workers are engaged in weekend work: in transport, hotels, shops and clubs, for example. Many manufacturing companies extend work into the weekend. The real issues are: what are reasonable work arrangements, appropriate remuneration, and what is in the interests of the public and the workforce.

Weekends are periods of relaxation and rejuvenation for most employees. Seventy years ago, Justice Higgins argued in a decision involving gas workers that “the true position seems to be that the extra rate for all Sunday work is given on quite different grounds from an extra rate for work on the seventh day. The former is given because of the grievance of losing Sunday itself – the day for family and social and religious reunions, the day on which one’s friends are free, the day that is the most valuable for rest and amenity under our social habits, whereas the latter rate is given because seven days per week for work are too many.” Justice Higgins believed that there should be payment at double time on Sundays to discourage employers from working their employees on that day.

However this view has not prevented many industries – as earlier cited – working beyond the normal five-day working week or making up rosters extending over six or seven days.

In the ‘Five Day week case’, the Full Court of the Commonwealth Court of Conciliation and Arbitration commented that “in cases where the public or national interest has to be considered the system of working a five-day week cannot be imposed upon an industry if it is to involve any impairment of reasonable efficiency, loss of reasonable production, misuse or non-productive use of manpower”.

This seems to be as good a test as any other, but the idea of the national or public interest is not a simple concept because there are conflicting interests in the community about many things. Extending shopping hours might seem like a good idea to the consumer but there are costs associated with this including the inconvenience to retail workers and the extra costs associated with retail outlets staying open for business. In the coal mining industry in the Hunter Valley there are occasional demands for seven-day working week rosters – which may be good for the coal companies. But the families of the miners fiercely defend their weekend. It is not in their interests.

Undoubtedly there is a trade-off between some work arrangements and others, such as the weekend break. These are real issues to be confronted. In the export and import-sensitive industries, it is essential for Australia’s economic development that we focus on improving efficiency, the training of employees and the shedding of unnecessary work and management practices.

Since a joint statement in September 1986 by the ACTU, the Confederation of Australian Industry and the Business Council of Australia, on examining work performance and productivity and the National Wage Case decision of March 1987, real and significant agreements have been achieved in many industries including the metal, motor vehicle, clothing and transport industries. Such agreements tie wage increases to the restructuring of work arrangements.

In the last year, more has been achieved than ever before in the area of improving labour market flexibility and instilling a culture of competitiveness in Australian industry. Employers and unions, particularly in metal manufacturing, are tackling ways of developing a multiskilled workforce. These are big achievements which did not get enough attention in Sir Roderick’s speech last week.

It is important to think about what we do and whether this should be changed or improved.  However, in some of the things he said last week Sir Roderick did himself – and the issues – a disservice.  In the workplace and at the public podium it is necessary to be thoughtful, sensible and avoid looking ridiculous.

Sir Roderick Carnegie (1937- ), co-founder of McKinsey in Australia, former CEO and Chairman of miner CRA (now Rio Tinto), had a stellar reputation in business. I came to slightly know one of his sons, Mark Carnegie, also in business.

Sir Rod’s expression of an idea in 1988, the standardisation of pay rates across the week (weekend work for no extra pay, his real point), I considered was another game by the big end of town to squeeze workers a little bit more.

It is always the same story: if only “they” would work longer, harder, for lower pay, free of “over regulation”, the country would be better off.

I pointed out various ways contemporary productivity was improving without destroying the concept of penalty rates.

The decade after this was written saw the balance between this idea and the working person’s paradise of Australia put to the test.

In the past 27 years so much has changed.