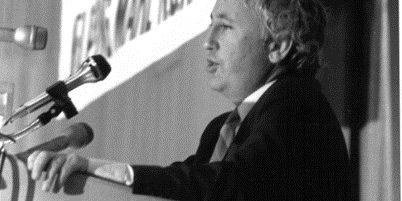 Memo from Michael Easson to John MacBean (the then Secretary of the Labor Council of NSW) dated 26 May 1987.

I’ve read through the ACTU Future Strategies for the Trade Union Movement document which was discussed at last week’s ACTU Executive meeting and formed a number of preliminary views, as follows.

The ACTU paper serves several purposes, including the promotion of the ACTU as a thoughtful, creative peak Council. At least the ACTU is able to project itself as an organisation with a strategy.

Even though the idea of 20 unions is a far-fetched objective (though not too far-fetched), no one can argue against the detailed points as to why larger unions are better than smaller ones in the protection of ordinary workers.

Perhaps we could take a leaf out of the ACTU’s book and prepare a strategy document for the 1988 Labor Council annual meeting. Such a document could cover:
– future role of the Labor Council
– Labor Council Services
+ workers’ compensation
+ legal
+ rehabilitation
+ health and safety
+ other services
– organisation of unorganised workers
– public sector unions and state government
– manufacturing industry in NSW
– projecting the union movement’s image in the community

2. Services of the ACTU

The more the ACTU does, the more important it becomes. The ACTU’s publishing/advertising arm has assisted the ACTU in cheaply conveying its message to affiliates and the community.

The financial and other services being proposed is the next area for ACTU expansion.

In retrospect, we have probably been too slow to become involved in superannuation. This has largely been the fault of the NSW employer [organisations] who have belatedly recognised the importance of superannuation funds.

So far as the Labor Council is concerned, there are three areas where we can move:-
+ continue the process of setting up the NSW Investment and Retirement Fund;
+ contemplate using advertisements from the Labor Council Directory and/or other publications to set up a Labor Council publishing centre. We should aim to co-ordinate and arrange for the publication of as many of our affiliates’ publications as possible;
+ move ahead of the ACTU by attempting to develop financial and other services in NSW. We should develop our ideas in this area, give a report to Labor Council and, as appropriate, call tenders;

3. Role of the Labor Council

If the ACTU’s ideas were implemented, the importance of the Labor Council of NSW would be greatly diminished. Twenty unions may not have much time for state peak councils. Hence, the above-mentioned points are directed to ensuring the Labor Council continues, on a long-time basis, to play a major role in NSW and nationally.

The restructuring proposals will inevitably further entrench the power of the ACTU officers’ group. This will be so because of the inner Executive idea — such an inner executive will be dominated by the officers — and the expansion of the centre unions or ACTU officers grouping on the Executive.

Whereas under the present structure it is conceivable, though unlikely, that the Centre-Right (us) could gain a majority on the executive, this prospect is reduced with the executive’s expansion.

Several points to consider are:-

i) who will benefit from the affirmative action positions?  The centre left’s candidate might be Anna Booth.  At the end of 6 years, her claim for the manufacturing unions’ spot might be unassailable.

ii) the expansion of Vice Presidents positions will be in the interest of the FCU/SDA group and the Left.  Will these positions be under proportional representation or a plurality of votes?

I think p.r. would not be in our best interest.  Why expand the current numbers of VPs?

This memo was a prompt for discussion between John MacBean and me. With so many changes in union restructure and the rapidly enhanced, dominant role of the ACTU within a few years of the election of a Labor government, I could see that the Labor Council’s pre-eminence in NSW and beyond would diminish. And that we would deserve to be eclipsed and marginalised if we had nothing to say on the big issues and challenges of the day. The first thing to do when you are searching for a new track is to see clearly ahead. I was impressed with the organisational élan of the ACTU officers led by Bill Kelty. There was a lot to be said for consolidation of union resources, minimising internal union conflicts (such as one union fighting with another on coverage), etc.

It is a world of yesterdays, irretrievably lost. In May 1987, the month of the memo, the economy was relatively buoyant; union membership was around 50% of the workforce in NSW; Labor was in office federally and at the state level in NSW; and there was still a Soviet Union. Within a year, the October 1987 stock market crash (“Black Thursday”) reset the global economy, unemployment began to steeply climb, and manufacturing industry shed tens of thousands of jobs. The European communist edifice was wobbling, the Berlin Wall came crashing down on 9 November 1989, the Soviet Union dissolved on 26 December 1991, the champions and fellow travelling supporters of communism in the Australian union movement, an energetic, subversive presence for 70 years, whimpered and soon after disappeared. One twitch of the nose and they were gone!

A year before the memo was written, on 14 May 1986, Federal Treasurer Paul Keating warned that Australia was living beyond its means and risked, without drastic reforms, becoming a banana republic.

Before the August 1988 Budget, Keating boasted: “This is the one that brings home the bacon.” Meaning that the whole gamut of economic reforms since 1983 was coming together to lay the foundation for future prosperity.  Protected industries were smashed with slashed rates of tariff protection, the Australian dollar – floated in 1983 – sunk.

Recovery came gradually and at considerable cost: government spending cuts, assets sales and a deliberate policy of forcing up interest rates – as high as 17 per cent for some home loan borrowers in 1989. By comparison, the Reserve Bank’s cash rate of 2.5 per cent today is a record low, with mortgage rates around the 5 per cent mark.

In 1987, I argued that the Labor Council should become leaders in superannuation and financial services.

The latter only occurred with the formation of Chifley Financial Services in 1989, a joint venture between the Labor Council and the Equitilink Group. With superannuation, there was reluctance to pursue this.  High interest rates meant wage earners needed money in their pocket, it was said. I could not get the Employers’ Federation of NSW to back anything in a JV at the beginning of the modern Australian superannuation era.

Contrary to Keating’s prediction of a soft landing for the economy the consequence was a severe contraction. By November 1990 he infamously described the economic situation as “a recession that Australia had to have.”  By early 1993, inflation was contained, hovering around 2% inflation and would settle within the Reserve Bank’s target (declared the same year) of 2-3% or lower, ever since; interest rates fell too.

We did not know that 1993 was the beginning of the longest economic boom in Australia’s history. The topsy turvy of the previous 20 years gave no reason to expect that. The beginning of “better days are here again” also spelt inexorable erosion of union membership. Which is why new approaches were needed to services, pricing, marketing, the deal. I was part of the union movement’s leadership. Based on results, the lack of impact on decline in significance, the limited practical change in what unions offered, was failure.

From Keating’s victory in 1993, superannuation was locked-in, through the superannuation guarantee legislation, making his unexpected electoral victory one of even greater significance than it appeared at the time.