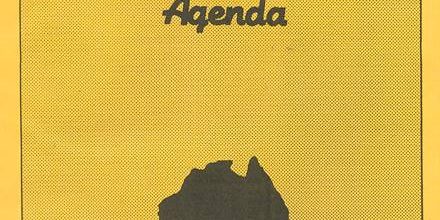 Report by Michael Easson to the ACTU Executive as ACTU delegate to the Asian and Pacific Regional Workers’ Education ILO Seminar on the Social and Economic Services of Trade Unions held in Singapore, 5 to 10 October 1983. Republished here is the body of the Report minus the Appendices, which covered minutes of the Conference, background papers, list of participants, and details of the Histadrut’s activities in the region in the field of agricultural and other co-operatives.

The ILO Asian and Pacific Regional Workers Education Seminar on the Social and Economic Services of Trade Unions was held in Singapore from October 5th to 15th 1983. The Seminar was jointly sponsored by the ILO and the Singapore National Trade Union Congress (SNTUC).

Attached is a draft report concerning the seminar which will be completed and published by the ILO in Geneva in a few months’ time.  A list of the participants at the seminar is also attached.

The main purpose of the seminar was to assess the various socio-economic activities of trade unions and explore the possibility of unions and union peak councils improving and extending those activities.

The conclusions of the seminar are contained in the attached draft report.

What follows are some thoughts as to what avenues the ACTU might pursue to assist the unions in South East Asia and the Pacific.

My conclusions are of two sorts: (i) What the ACTU can do through the ILO; and (ii) What the ACTU might be able to provide as practical assistance to the unions in our region.

The ACTU should support the recommendations stated on page 20 of the draft report, namely:

51. …the participants observed that the ILO should help in developing training centres located in the Asian and Pacific region. Such centres should provide advisory assistance and training in such areas as the development of co-operatives and other related socio-economic services. Additionally, the ILO should facilitate exchanges – short-term training and/or study visits – between Asian and Pacific countries. The best way to learn about the experiences of other countries is to acquire first-hand experience, and there is value in working for a short duration in the management of a particular project. Similarly, the ILO should develop curriculum materials for the use in training courses concerning, for example, workers co-operatives. Such curriculum resources should be in the form of guides rather than inflexible, ‘definitive’ statements as to the training required in various countries.

No doubt, as with other recommendations of ILO convened conferences, those recommendations will only be realised where sufficient pressure or influence be exerted by interested national union movements. The ACTU’s representation on the governing board of the ILO places the ACTU in an excellent position to press for these recommendations.

More may be able to be done through [the Trade Union Training Authority] TUTA or other agencies in the recruitment of unionists from the Pacific and South East Asia to attend specialist trade union courses. ACTU representatives on the National Council of TUTA may be able to encourage such courses. Furthermore, as things currently stand, when students from South East Asia or the Pacific attend TUTA courses they do not usually meet union officials either from the ACTU or State Labor Councils. Perhaps the ACTU could request TUTA to arrange such meetings or visits to appropriate fraternal unions by union officials from our region.

It is of significance that faraway Denmark and West Germany, through the DANIDA Project and Friedrich-Ebert Stiftung respectively, contribute more resources to our region’s trade union movement than anything the ACTU provides. One reason for assistance by those countries is related to the donations or grants or direct funding provided by the Danish and the West German governments to the international activities of their trade union movements.

Perhaps it is time that the ACTU raised with Bill Hayden [the Foreign Minister] the possibility of the Federal government providing funding for the development by the ACTU of projects of assistance to unions in the South East Asian and Pacific regions. The ILO Conference identified as areas where external assistance would be useful (see page 21 of the draft report) such as the following:

– provision of funds to accelerate the establishment of projects.  However, care should be taken that such assistance does not lead to dependence.  Extension and provision of expertise to conduct studies to determine the feasibility and viability of certain types of trade union projects would also prove useful.

– provision of referral services to resource and information centres that could assist in the initial establishment and development of certain forms of social or economic undertakings.

– provision of training materials, guides, manuals and other relevant documentation.

All of these are areas where assistance from the ACTU could be provided.

One proposal that might be discussed with the Federal government is the appointment of a Labour Attaché to the ASEAN region, and another Labour Attaché to the Pacific region. The Senate Standing Committee on Foreign Affairs and Defence in its. report Australia and Asean (1980) recommended, as a result of suggestions from ALP Senators that: “The Committee supports the proposal for a Labour Attaché, with the appropriate background and qualifications, in the ASEAN region and recommends that the government, in consultation with industry and the ASEAN governments should examine the proposal”. Consultation should, of course, primarily be between the ACTU and the Minister for Foreign Affairs. A Labour Attaché should preferably be a former union official or [someone] sympathetic to the labour movement. The ACTU should press, if the idea is thought worthwhile, to be represented on the selection committee. Labour Attaches would be in a position to gather basic information concerning labour relations in our region and facilitate contacts between union leaders in Australia, South East Asia and the Pacific.

5.  ACTU Submission to the Committee to Review the Australian Overseas Aid Programme

I understand that the Minister for Foreign Affairs has established a committee to advise the Federal government oh foreign aid projects and priorities. Although the deadline for submissions is probably passed, the ACTU could formulate a late submission which would advocate: (a) sensitivity by the Federal government to unions and worker organisations (such as worker co-operatives) in our region concerning projects in the countries for which Australian aid is provided; and (b) consideration of funding to the ACTU for projects of assistance to unions and worker organisations in South East Asia and the Pacific.

Some recommendations for the ACTU to consider are stated overleaf.

I would like to thank the ACTU Executive for nominating me as their delegate to this Conference. I would also like to thank the Labor Council for paying for all of my travel, accommodation and living expenses.

The Appendices to this Report, included in the document circulated to all the members of the ACTU executive, are not included here.

The ACTU endorsed everything in principle.

Moves were underway, unknown to me at the time, for the involvement of the ACTU, and unions directly, in the leftist-oriented Pacific Trade Union Forum, about which I have written elsewhere (‘Left and Labor in the Pacific’) and the Australian People for Health, Education and Development Abroad (APHEDA), formed in 1985, sometimes called the ACTU overseas aid agency.

The most impressive person I met in Singapore at this conference was Yehuda Paz (1930-2013) who at age 20 from Brooklyn, freshly graduated from Columbia University, made aliyah to the new state of Israel, helping to form a kibbutz in the Negev desert region.

At the time I met him, Yehuda or Professor Paz, from 1980 to 1992 was Director and Principal of the International Institute for Development, Labour and Co-operative Studies, affiliated with the Israeli union movement’s peak body, the Histadrut.

Later, in 1997 he founded the Negev Institute for Strategies of Peace and Development that proposed a co-operative approach to the Israeli-Palestinian conflict.

Paz’s obvious sincerity and insights and high intellect were impressive. He seemed to have an encyclopaedic knowledge of the region, local organisations, and personalities

He remarked that as a young man he was enthusiastic in 1948 for George A. Wallace for President, the candidate of the Progressive Party.  Paz was active in the Young People’s Socialist League (YPSL). He and fellow YPSL-ers grew disillusioned, however, with Wallace’s uncritical sympathies for communists and the ‘good intentions’ of the Soviet Union.

Paz was attached to an ideal view of America, saying that whatever their flaws and the patent ignorance of many Americans about the wider world, humanity relied on the basic decency of the American people. They usually try to do the right thing, he said.

Paz wondered if Australia could do more, even something, in building up self-supporting, autonomous cooperatives in the Pacific and at least some Asian countries.

Paz believed that the aid bucket had limits. Sometimes if not frequently humanitarian aid is essential to some inherently poor societies. Self-respect and what might now be called sustainability needed more.

Unfortunately, the first head of APHEDA was unsympathetic to anything the Histadrut (the General Organisation of Workers in Israel, equivalent to the Australian Council of Trade Unions) would be involved in, partly because of an all too common leftist perspective on the Israel-Palestine dispute.

In addition, the suggested focus on worker and other cooperatives fell on deaf ears.

Admittedly, all of this was difficult to do, everything depended on finding the right people to do the detailed, perhaps monumental, tasks required. Or so many of us thought. If you think a job is monumental one’s focus might too much be on the steep climb, rather than imagining the step by step achievement of reaching the peak.