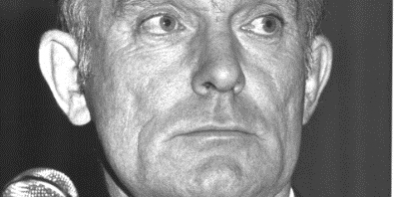 A speech delived at a function to honour Frank Mossfield’s contribution to the labor movement, published in Workersonline, the official organ of Labornet, August 2004.

Gosh he was loyal. He never stopped me once from telling my jokes at the Labor Council. Did you hear about…?

This may be a tougher audience than I am used to. So I better not try my luck.

I am going to say a few words about Frank, the person, the dedicated unionist whom I came to know well when I became Secretary of the Labor Council in February 1989.

The union movement was Frank’s passion. As he said in his Maiden Speech as MP for Greenway: “I am very proud of my trade union background.” What did he do there? What were his achievements?

Frank was a fitter and turner by trade, joining the Australasian Society of Engineers as an apprentice; after 15 years in the trade he became a union official with the ASE. He later became the State Secretary and Federal President of his union, and upon the amalgamation of the ASE and the Ironworkers’ union, he became the Sydney branch secretary of FIMEE. Frank served a term on the ACTU executive. Those were sometimes difficult times. The mid 1980s/early 1990s were a period of immense change; many traditional manufacturing businesses closed; Australia was opened to world competition, the end of the cold car had huge significance in the world of organised labour. Enterprise bargaining and changes to the arbitration system were challenges. Frank sat at the table and contributed to those events.

The challenge for Labor was to provide a helping hand to help people through – with training, vocational education, assistance and other means.

Perhaps Frank’s greatest impact was at the peak Council of the movement in NSW. In 1989, Frank who was already Vice President (elected in 1984) became Council President, replacing the late Ernie Ecob, the AWU stalwart who resigned in March that year. Frank went on to serve as Council President right up to his election as MP for Greenway in the 1996 Federal elections.

He was President of the Labor Council for seven years and one of the state’s leading union officials.

– Presided in the Chair at the weekly Council meetings of 100 to 200 delegates attending;
– Chaired the meetings of the Council’s radio station 2KY
– Participated in the major discussions on strategy.

And there were the guest speakers at Labor Council meetings. On one occasion there was a guy who turned up, dressed as a tree.  He wanted to speak about logging. Assistant Secretary Peter Sams apparently did not immediately recognise him as the guest speaker. He asked before the meeting, “who’s the freak show tonight?”

Then there was another guest who arrived one night, when Frank was Acting President, Gennady Yanayev (1937-2010). He was then President of the All Soviet Federation of Trade Unions. The teachers were demonstrating that night about something or other. Gennady took fright. He felt unsafe. And before he was to address Council, he fled. Years later I was squinting at the television set. I recognised him. Gennady was one of the three leaders who tried to stage a coup in the dying days of the Soviet Union in August 1991. The same guy who was too scared to address the Labor Council. I did not think they would succeed.

Anyway, the first year of Frank’s presidency, in 1989, was the year when the Greiner government was at its strongest. Frank’s aim, the Council’s aim, was to blunt their effectiveness and defeat or amend legislation in the Upper House. It was not just polite talk we were engaged in. Rallies were organised, workshop meetings held. Frank spent a lot of time going around the bush, speaking to workers about our campaigns.

What difference did Frank make? A lot, actually. Let me give five examples:

First, the Labor Council needed to change. Although a generation older, we both came from a Catholic, anti-communist rightwing Labor tradition. Nothing wrong with that. But with the Berlin wall falling and old factional labels meaning not as much as they once did, we needed to broaden the Labor Council’s base. Fighting battles based on the Grouper/commo battles of the 1950s made little sense forty years later. Without Frank, the Labor Council would not have diversified its support to include people of moderate left and centre backgrounds.

Second, Frank participated in the meetings setting up Chifley Financial Services in 1990, which the Labor Council still owns a third. This is both a thriving business and a service to workers seeking good, objective advice.  Frank worked in Chifley for a couple of years before Parliament beckoned.

Third, I asked Frank about appointing Barrie Unsworth as managing director of Radio 2KY. Frank enthusiastically backed him; Barrie did a great job setting up narrowcast radio licenses in country NSW and managing the station back to commercial health.

All he did then meant that years’ later under Secretary Costa, who sold 2KY for $20m plus, that such a result was possible.  Frank deserves some of the credit.

Fourth, in the dark days in the early 1990s, when Greiner was in the saddle as NSW premier, we formed the Save Our Services Alliance and other initiatives, which Frank led.

In the 1991, when Labor was doing it tough we raised a million dollars in cash and in kind to support campaigns in marginal electorates, particularly in the bush. Frank went all over the State. That effort brought Labor to within a whisker of victory in 1991.

Frank was arguably one of the most active Presidents of the Labor Council since Jim Kenny, in 1941.

In January 1995 Frank was appointed a Member of the Order of Australia for his contribution to the movement.

His story deserves to be better known. The union movement was not always easy. The post-amalgamation tensions in FIMEE, prior to the AWU amalgamation caused Frank to think about moving on. We wanted him to work for Chifley Financial Services. They were tough days for Frank.  But as George Orwell once remarked, “no bomb that ever burst shatters the crystal spirit.”

It is to that spirit we pay tribute to tonight.

In thinking about what to say this evening, I found a copy of Frank’s Maiden Speech wherein he quoted Ben Chifley who spoke at the NSW ALP Conference in 1951 and stated: “I hope that the defeat at the last elections, following on the defeat at the 1949 elections, has not discouraged members of the labour movement from fighting for what they think is right – whether it brings victory for the party or not. The labour movement was not created with the objective of always thinking what is the most acceptable thing to do – whether this individual will win a seat or whether the movement will pander to some section of the community. The Labor Movement was created by the pioneers and its objectives have been preached by disciples of the Labor Movement over the years, to make decisions for the best for all the people.”

There’s a clue there about the man Frank is: a man of dignity, who stood for something.

Tonight I want to say thanks Frank for what you did for the labour movement and more recently, for the people of Greenway.

Frank held office as the MP for Greenway in the Federal Parliament from 1996 to 2004. As President of the Labor Council of NSW, he replaced Ernie Ecob, an embarrassing, racist throwback to another era. I forced Ecob’s resignation as President. (Ecob was then the NSW Secretary of the Australian Workers’ Union, who once had the finest industrial officers’ team of any union. But his suspicious paranoia drove all of them out – either fired or resigned. Ecob was also known for misogynistic remarks, such as: “Women aren’t welcome in the shearing sheds. They’re only after the sex”, which is why there is a sheep on top of the Gold Ernie in the Ernie Awards that began in 1994, the brainchild of Meredith Burgmann. The ‘Ernies’ are awards for comments deemed misogynistic. He had to go.)

In contrast I found Frank (and his wife, Jan) wholly decent. Union amalgamations saw his old union, the Amalgamated Society of Engineers (the ASE) merge with the Federated Ironworkers Association (FIA) and a few other unions into the Federated Industrial Manufacturing and Engineering Employees (FIMEE) which later merged into the Australian Workers Union (AWU). The musical chairs, stresses of accommodating officials in new organisation, together with poor management from the national office, and the recession of the early 1990s, hitting the manufacturing and metals industries hardest, thereby reducing membership, meant he lost his place as a full-time official.

Prior to his entering parliament in 1996, post-retrenchment at FIMEE, I employed him part-ime with Chifley Financial Services.