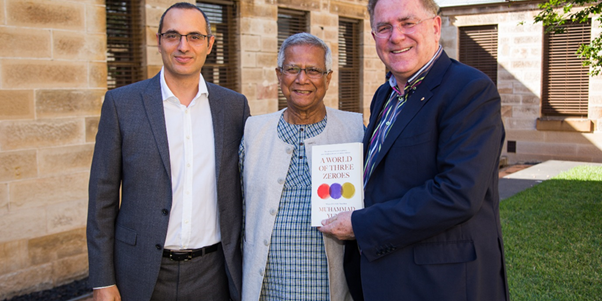 At a function hosted by EG Funds Management at the beginning of last week, I had the pleasure of welcoming Nobel Peace Prize laureate Muhammad Yunus:

Good morning everyone. Thank you for joining this brunch with Professor Muhammad Yunus. Please join me in acknowledging the Gadigal people of the Eora nation – the traditional custodians of this land. We pay respect to elders, past and present, and we also extend our welcome to all indigenous people present.

This is your function. What we will do is hear a bit from me; see a video organised by Naomi Steer, head of the UNHCR in Australia, on how the idea of micro-financing inspired one of their aid projects in Uganda; then we will hear a short address from the guest of honour, followed by a Q & A with Andrew West of the ABC, followed by your engagement through comments, questions and insights.

EG is involved in a range of charities. We hear of the work good folk do and through our support for Humanitix, we came across this opportunity to support the Grameen Foundation. How incredible from small beginnings a world movement can emerge.

Soon we will hear about their inspiring work, beginning in Bangladesh where, along with local villagers in Jobra, near the University of Chittagong, you established the Grameen Bank – “bank of the villages” in the Bengali language, driven by the belief that credit is a fundamental human right. The objective is to help poor people escape from poverty by providing loans on suitable low interest terms and to teaching sound financial principles so they could help themselves.

This morning we can understand the story of the founding, flourishing and threats to the movement.

We will hear a lot about the past and its meaning for the future. We will consider new ambitions – as expressed in the book A World of Three Zeros and their potential realisation. The three zeros are zero poverty, zero unemployment and zero net neutral carbon emissions

And we will hear from you, sir, Professor Yunus.

Dorothy Day, fighter for freedom, charity worker, and the founder of the Catholic Worker movement in the USA, once said: “Don’t call me a saint — I don’t want to be dismissed that easily.”

When you think of Professor Yunus, founder of the single greatest movement to lift hundreds of millions of women out of poverty, I think of that quote.

Your story deserves to be better known.

Born in 1940 in the seaport city of Chittagong, British India, you studied economics at the Dhaka University, East Pakistan, then a Fulbright scholarship enabled the completion of a PhD in economics at Vanderbilt University in 1969; the following year you became an assistant professor of economics at Middle Tennessee State University, 1969 to 1972. The beginning of the ’70s saw extreme famine afflicting your people and a campaign for independence, which you did much to draw attention to among your American colleagues. You returned to your homeland, to the new state of Bangladesh, to head the economics department at Chittagong University, created less than a decade before.

Teaching at the University meant encountering instances of dire poverty.  As you explained:

Elegant theories of economics in the university classroom, stood in contrast in the backdrop of a terrible famine in Bangladesh. Suddenly, I felt the emptiness of those theories in the face of crushing hunger and poverty. I wanted to do something immediate to help people around me, even if it was just one human being, to get through another day with a little more ease.

You decided out of your own pocket to loan small amounts of money to destitute basket-weavers in Bangladesh, all women, who were effectively enslaved by harsh loan agreements.  US$27.00 was all it cost to rescue 42 victims. From there grew the idea of the Grameen Bank, which has advanced to the forefront of a burgeoning world movement toward eradicating poverty through micro-lending.

Replicas of the Grameen Bank model now operate in more than 100 countries worldwide. Incredibly, 97-98% of loans are repaid.

In your 2006 Nobel lectureship you stressed that that year’s peace prize belonged to the women volunteers and activist at the heart of the “bank of the villages” from the start. You noted that the wide disparity between wealth and its self-defeating implications: “This is no formula for peace.”

Underscoring remarkable achievements are some simple ideas: moral and spiritual relationships are first-order concerns. A grassroots campaign can overcome the limitations of piecemeal charitable efforts, as important as such help can be. You say: “We encourage and support every conceivable intervention to help the poor fight out of poverty. We always advocate microcredit in addition to all other interventions, arguing that microcredit makes those interventions work better.”

The relationships between different members of the economy must be put right. Only then will there be enough to go around. You see a social business as a non-dividend company dedicated to solving human problems, operating side by side the dividend model. In your book, A World of Three Zeros you say:

By defining “entrepreneur” in a broader way we can change the character of capitalism radically, and solve many of the unresolved social and economic problems within the scope of the free market. Let us suppose an entrepreneur, instead of having a single source of motivation (such as, maximising profit), now has two sources of motivation, which are mutually exclusive, but equally compelling − a) maximisation of profit and b) doing good to people and the world.

This is the key to helping millions create new lives lived in dignity, creativity and independence.

At the function, Prof. Yunus said:

“The Bank should go to people and not people come to the bank.”

“People say I am turning the banking system upside down. Actually, I am putting it right, standing on its feet, not upside down”.

The first branch of Grameen in the US was in Queens, NY. Now Seven branches in NYC. A popular business is hairdressing, cleaning services, one unique business not found in Bangladesh is dog walking!

“Credit is financial oxygen, but billions of people are deprived from that and that is why they become poor.”

“Solar Energy to villages is very difficult. How much money do you spend on kerosene?” Two million homes with solar energy.

“Personal profit is core of business, but system still works because profit is not the only incentive.”

“Super happiness if you help other people.”

Top 8 people own more wealth than the bottom 40 percent.

“One limitation of charity is that good work only happens once. A social business is an endless use of money.”

“Don’t look for a job look to be an entrepreneur.”

“Education system should be redesigned to make people life ready rather than job ready.”

“I came back to Bangladesh to solve problems and that is exciting.”

“You raise one finger you touch one thousand problems in Bangladesh.”

“We see things only through glasses with dollar signs we need to wear bifocal glasses with a social lens as well.”

If a pension fund maybe directly through members giving permission, just one percent of their investment for social borrowing, this could make a huge impact; money lent will come back.

Thanks to Mia Kwok, Adam Geha, and all the team at EG for organising this event before an intimate room of leaders from religious organisations, corporate Australia and entrepreneurial thinkers.