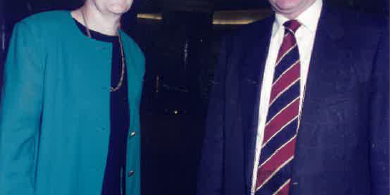 This speech is what I prepared at the time, before Patricia Staunton’s retirement function on 17 February 1995.

Sometimes I have wondered what she was like when she was younger. For example, the fresh freckled faced girl aged 16, just out of school, boiling water for cups of tea in the accountants’ office in Townsville. Apparently it was Sir Artie Fadden’s old firm and the retired politician would sometimes drop in, flag his hat, and ask “how are you girlies?” to what we would now call the support staff. My mental picture of the scene is of Pat asking just loudly enough to be heard but just soft enough for everybody to pretend they had not actually heard: “who is that jerk?”.

You see, one of the most striking features of the lady is her direct, tough and proudly independent manner.

I have known Pat as a colleague, as a friend, as someone I could share confidences – as a warm, loyal human being.  Incredibly loyal – so loyal has she been that, when I was Secretary of the Labor Council of NSW, every time I told a joke at the Thursday night meetings she would always laugh. Which is more than I can say about most delegates.

I will give you an example. Have you heard the story of the owl, the wallaby and the grasshopper? (I am afraid you will have to hear this. This is a loyalty test to illustrate my point.) Well, it goes like this:

It is in the middle of winter, freezing cold, in the Blue Mountains. There is a grasshopper shivering and wondering how to get warm. The grasshopper spies an owl and hops up and asks: “oh wise owl, how can I get warm?” The owl replies: “You see that wallaby over there? What you need is a warm coat of fur.”  Fantastic!  At last an answer. But as the grasshopper begins to hop away, she returns to the owl and says:“Just one other thing. How do I get a coat of fur?” And the imperious owl looks down at its victim and says: “I have no idea. I am a strategy person. The business of implementation is someone else’s responsibility”.

Now let us be honest here. How often in hospital administration have we considered ourselves to be in a situation like the bewildered grasshopper? But hands up those of us here who really identified with the owl?

But I digress. Pat and I first met in 1981 when the Nurses Association was at the beginning of changes that would radically transform the organisation. Earlier, the Association had affiliated to the Labor Council of NSW and I vaguely came to know of Ronnie Henlen, Pat Lloyd-Lucas, and some of the other officers. But Pat was apart from all of them. She was dynamic, a reformer, quick-witted and fierce in pursuing “the members’ interest”. Then followed the election of 1982 – the defeat of the Lloyd-Lucas/Staunton team and what might be called the years of unleaven bread: five years of internal bickering, policy fights and factional battles.

I do not want to say much more about this, other than to observe that such experiences are the make and break of organisations and of individuals. In retrospect, the union movement, the Association and Pat personally are the better for those experiences. However, it did not seem like that at the time!

In 1988 Pat’s respect in NSW was immense – within the labor movement especially. In 1988 she became Vice President of the Labor Council of NSW, a long overdue selection as the Council’s first female presidential officer. Soon after she joined the ALP Administrative Committee and the Sydney City Council.

At the 1988 State election, safe enough in the distance of time for the story to be now told, the then NSW Minister for Health, Peter Anderson, and the then Shadow Minister, Peter Collins, would fax to Pat for correction, comments and additions to the confidential details of their respective party’s proposed health policies. Pat did not spare the fax machines!

She joined the ACTU executive in 1987 and was a popular choice for ACTU Vice President in 1990. That was in the days when there were only three – a real VP! Bill Kelty was right to nominate Pat for that job. (At the time Kelty’s judgement was questioned. My experience is that when someone comes up with a good idea it is foresight and leadership. When you disagree, there has been a grave lack of consultation!)

Sometimes she scared people witless. She has always spoken her mind. You can never be exactly sure what she might say next. Like during the debate on union restructuring when she snapped: “Look.  The reason the NSW Nurses Association has grown by 5% plus in each of the last three years is not because we say to people: ‘welcome. You can join conglomerate health union number three’. It is because we ask them to join the Nurses Association”.

Her directness and scepticism won her a wide following – across the spectrum. She was always one of the best speakers at ACTU Congress and at Executive meetings.

Sometimes she would sound as gentle as an exploding firecracker as when she asked at one special ACTU Conference what did productivity mean? Did it mean that hospitals were more efficient because of the number of bed pans cleared in the day? The shortage of time patients spent in bed before they shuffled off this mortal coil? In other words, cleverly, Pat highlighted that care, service, equity are concepts that should not be left out of the picture when the labor movement talks about important things like wages policy.

But it was not all verbal artillery fire. Pat has a great sense of humour – a black sense of the absurd.

Once we thought after Simon Crean resigned as ACTU President that Pat should run. We imagined Jimmy Carter’s 1976 winning campaign slogan might be recycled: “why not the best?!”

In everything she has done in the last few decades the theme of developing, articulating and promoting the Association’s interests has been central to Pat’s life. It is a great story.

A big part of that story is respect for what she has done. That is why so many people are here tonight.

Pat was never one to confine her enthusiasms to the quietness of her office or to make a clever debating point in wider circles of the labour movement.

You see, Pat led the Association in professionalising the industry in developing good enterprise agreements, in building membership and modernising the services the union provides for members. Of course nothing was achieved without a team effort. But teams also require leaders and coaches.

When I look around – and see those who have fought the good fight, at the members of Pat’s family, and those who are here to honour someone who never gave up – I can see we have all been through a lot together. Pat is soon to embark on a new and exciting journey along the path of building a better world.

Truly it can be said in the words of Alfred Lord Tennyson,

Though much is taken, much abides
Though we are not now what once moved earth and heaven
What we are, we are
One equal spirit of heroic hearts, weakened by time and fate
But strong in will
To strive, to seek, to find, and not to yield.

Those words now read as a tad sentimental. I did not read them out. The night called for shorter, less formal speeches. But this is what I held in my hands and guided what I said.

Pat Staunton AO (1946- ) was someone I was very close to in the union movement. I remember flying back from Albury/Wodonga to see her in 1982 after she lost election as Assistant Secretary of the NSW Nurses Association, which left her and her supporters wondering whether to relinquish their positions in the union. (She was still Senior Industrial Officer and/or Legal Officer at that time.) Most people stayed on and ultimately ousted the leftists who temporarily had the senior positions.

She became a Vice President of the Labor Council of NSW and also of the Australian Council of Trade Unions (ACTU).

Pat spoke with me at the “In Union with Mandela” rally outside the Opera House in October 1990.

In 1993, when Senator Graham Richardson resigned from the Senate, Paul Keating rang her and proposed that she fill the vacancy. She said she was interested. But there was no follow-up by the PM.

This speech I gave was after I left the Labor Council and before Pat’s election in 1995 to the NSW Legislative Assembly. Full time politics was not a happy experience. She should have been made a Parliamentary Secretary and then a Minister. The new Premier should have utilised her talents. I remember Jeff Shaw, QC, Leader of the ALP in the Legislative Council, saying to me how sad it was that the ALP never utilised her talents properly. Not to have done so signalled a decline in the effectiveness of the NSW ALP Right.

After serving for an unhappy two years, she resigned from Parliament in 1997 to resume work at the NSW Bar. Later came an appointment in 1999 as Chief Magistrate. Later still, Deputy President and Judicial Member of the Industrial Court of New South Wales (the NSW Industrial Relations Commission) from where she retired in 2009.