(1992) Speech at the Opening of the Sydney Harbour Tunnel 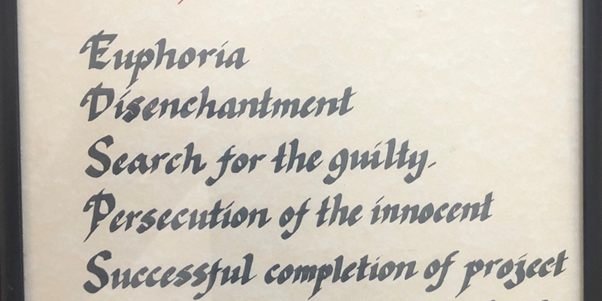 I am honoured to be here today at this great event to mark a magnificent achievement. In the words of a great Australian poem:

At a moment like this it is worth thinking about how the project began, and why it succeeded. Could something similar happen again? I wonder. As a result of the things that have happened in recent years, it’s worth asking whether we’ve made it harder to achieve such a big vision.

Typically, there are six steps in any major project,

Today I run the risk of falling into the latter category.

Because the real achievement belongs to those who created this idea and made it happen.

The Labor Council’s involvement in this project began in 1987 with negotiations with Transfield-Kumagai. During that year, a Section 11 agreement was entered into covering the terms and conditions of employment for the entire construction of the tunnel.

The industrial agreement was signed on 7 December 1987 and involved the Labor Council of NSW, the South Coast Labor Council and 10 unions. Construction began in 1988. For the bulk of the life of the agreement, Assistant Secretary Peter Sams and former Industrial Officer John Tolley oversaw its operation on behalf of the unions and workers.

The South Coast Labor Council was responsible for representing in the construction of the immersable tube units in Wollongong.

Lost time has been minimal – indeed this agreement has combined with the good will of the unions, workers and Transfield-Kumagai to produce an exemplary model of successful industrial relations. The agreement covered over 4000 employees and has lasted 5 years.

Another area of success has been the health and safety record during the construction of the tunnel. The training and overall safety awareness on this site has provided yet another model of successful ‘enterprise negotiation’ under Section 11 of the old NSW Industrial Relations Act.

The tunnel has been completed on time and on budget.

Congratulations must go to Laurie Brereton, without whose determination, this project might never have begun. Congratulations also to Neville Wran and Barrie Unsworth, to the current state government, to Transfield-Kumagai, to the workers and the unions –  and to the Industrial Commission, especially former Deputy President John Varnum and President Bill Fisher.

Most of all, thanks to the workers who are an example to all Australians.  And thanks to the people of Sydney who had “creation in their veins”.

Transfield Construction company and the then Premier, John Fahey, invited me to speak on behalf of the workers and their unions at the opening.  The poem I had quoted from was mis-identified, derived from a speech given in the Federal parliament by Rex Connor on 9 July 1975, during which Whitlam tabled the loans documents and sought to defend the government’s position.

During an emotional defence of his behaviour, which I heard on the radio at the time, Connor proclaimed the Whitlam government’s defence of its proposals to develop Australia’s mineral resources and stated: “I fling in the face of the little men of the Opposition the words of an old Australian poem”, from which I drew my quote, from the Hansard. But in fact the poem is a bastardised version of The Coming American, by the American poet Sam Walter Foss.

On the six steps point, I was later presented with a framed version by the Honourable John Varnum AM. We had workshopped the points before my speech. The ‘six steps’ appeared in Mark Latham’s A Conga Line of Suckholes: Mark Latham’s Book of Quotations, Melbourne University Publishing, Carlton, 2006. Perhaps he was there in the audience when I delivered this speech.