(1992) Commercial Restrictions on Exporting (Including Franchising)

You are here:
Reports to government 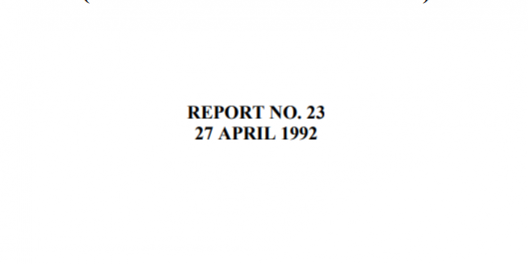 What follows are the Terms of Reference and the Overview Extract from the Report.

The Industry Commission inquiry report, Commercial Restrictions on Exporting (Including Franchising), was signed on 27 April 1992 and subsequently released by the Commonwealth Government.

The Commission has been asked to inquire and report on franchise agreements and similar arrangements that restrict Australian exports (see box).

The restrictions arising from the arrangements under inquiry are typical of those associated with the commercial transfer of technology or other intellectual property rights, and covered by patents, copyright and trademarks. The restrictions may also arise from control exercised through equity links for reasons related to the transfer of technology or, more generally, business strategies. They may be formal or informal.

Some of the restrictions on exports are direct. For example, the restrictions applied by a parent company or a licensor of technology may allow a subsidiary firm or licensee to export only to a specified (local) market, or may prohibit any export at all. If domestic firms are permitted to export, it is often only to New Zealand and Papua New Guinea, and sometimes Asia.

Other restrictions are indirect, and may affect exporting by their adverse impact on cost competitiveness, for example by a parent company directing its subsidiary to purchase inputs from a particular source.

Although franchise agreements and similar arrangements are mentioned as significant factors hindering Australia’s export performance in some recent studies (BIE 1990, ACTU 1990, AMC 1986) and other publications referred to in this report, evidence of any problem is hard to come by.  Indeed, very few submissions were provided to the Commission for this inquiry. A good deal of anecdotal evidence was received from industry associations, companies and unions ‘that commercial restrictions are not considered the problem they once were’. Some organisations that might have been expected to provide a submission thought it was hardly worthwhile to do so.

Nature and Incidence of Restrictions

The commercial and informal character of the restrictions make it impracticable to identify their precise nature and incidence. However, as the restrictions are predominantly associated with the purchase of technical know-how and with foreign investment, the Commission inferred the potential for restrictions by looking at trends in these areas.

Purchased technical know-how, which includes licensed technology and other intellectual property, is predominantly sourced from overseas and, within this, from related firms. Over three-quarters of the value of these purchases is by the manufacturing sector. Payments for the technical know-how component of total expenditure on research and development in Australia have fallen from around 50 per cent to around 28 per cent over the last decade. This suggests that the potential for restrictions associated with the purchase of technical know-how is correspondingly declining.

Influence of Restrictions on Efficient Resource Use, Exports and Foreign Investment

All commercial restrictions on exporting have the potential to impose costs on the Australian economy.  However, commercial restrictions which arise from franchise agreements and like arrangements flow from business decisions made in response to market circumstances. Whether associated with formal or informal arrangements, restrictions are an outcome of commercial decisions that govern access to technology and investment capital and are not a primary determinant of efficiency or competitiveness. Their effect on efficiency in general and exports of individual products is part of the price that has to be paid for improving the competitiveness of industry. In the case of foreign investment, restrictions may be sought by investors as an initial condition for investment in Australia.

Technological improvement can be an important means of achieving and sustaining international competitiveness, particularly in the manufacturing sector where commercial restrictions are most prevalent. It is largely a process of incrementally improving production within the firm and adapting to changes in demand. Where an industry achieves international competitiveness, it is more likely to rely on technology developed in-house, rather than purchased. Improved competitiveness, therefore, can be expected to lead to fewer restrictions on exporting.

Commercial behaviour will generally ensure that a net benefit flows from the transfer of technology. That is, in the absence of market distortions, there will be an improvement in efficiency relative to the situation before a transfer takes place. The disadvantages of restrictions are therefore more than offset by the benefits which the arrangements bring – access to technology, foreign investment and global networking.

Where Australian businesses have the potential to compete in overseas markets, it is not generally in the interests of owners of intellectual property or parent companies to constrain that potential by applying restrictions. Furthermore, where an Australian firm becomes internationally competitive it would be in the interest of all parties to renegotiate or review restrictions.

Government intervention aimed specifically at avoiding commercial restrictions on exporting is not justified.

The transfer of technology plays an important role in achieving and maintaining competitiveness.  Businesses accept some restrictions on exporting because they need access to the technology. The facts are that firms enter into these agreements for commercial reasons and the conditions are normally negotiable.

In Australia, earlier debate on this matter has been clouded by assumptions that:

• firms are somehow forced into these agreements;
• licensing agreements have overall negative impacts; and,
• export levels would rise significantly if these restrictions are removed.

The debate has centred upon the restrictions themselves, instead of the causes of uncompetitiveness. The advantages accruing from the underlying arrangements have been ignored or discounted. These advantages more than offset any disadvantages.

In Australia, governments have a role in facilitating free and fair competition. Current microeconomic reforms and legislation such as trade practices law are manifestations of this role. Any attempt to go beyond this by proscribing restrictions could be counter-productive since it is likely to depress economic growth and overall welfare. It would compromise access to technology, investment capital and global networking, factors which are all essential to the achievement of international competitiveness. These findings accord with the position in OECD countries where the restrictions under inquiry are not an area of policy concern.

(1992) Review and Recommendations in Relation to the Role and Function of Corrective Services Industries
August 24, 1992
Search
Categories
Go to Top