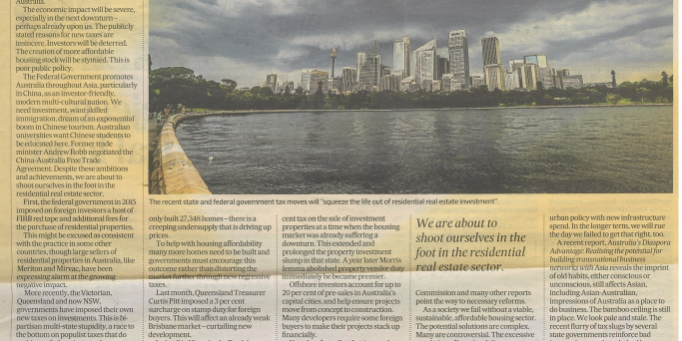 We will rue the day narrow-minded State and Federal governments decided to squeeze the life out of residential real estate investment through steep new taxes and red-tape on foreigners in Australia.

The economic impact will be severe, especially in the next downturn – perhaps already upon us. The publicly stated reasons for new taxes are insincere. Investors will be deterred. The creation of more affordable housing stock will be stymied. This is poor public policy.

The Federal government promotes Australia throughout Asia, particularly in China, as an investor-friendly, modern multi-cultural nation. We need investment, want skilled immigration, dream of an exponential boom in Chinese tourism. Australian universities want Chinese students to be educated here. Former Trade Minister Andrew Robb negotiated the China-Australia Free Trade Agreement. Despite these ambitions and achievements, we are about to shoot ourselves in the foot in the residential real estate sector.

First, the Federal government in 2015 imposed on foreign investors a host of FIRB red tape and additional fees for the purchase of residential properties.

This might be excused as consistent with the practice in some other countries, though large sellers of residential properties in Australia, like Meriton and Mirvac, have been expressing alarm at the growing negative impact.

More recently, the Victorian, Queensland and now NSW, state governments have imposed their own new taxes on investments. This is bi-partisan multi-state stupidity, a race to the bottom on populist taxes that do nothing to fix housing supply or improve affordability, as noted by the Property Council of Australia.

This week a beaming NSW Treasurer announced that foreign buyers of property in NSW will be hit with a 4 per cent stamp duty surcharge, and will pay an extra 0.75 per cent land tax from 2017.

The Urban Taskforce noted the surcharge will double the stamp duty on an average house from $40,000 to $80,000 and act as a disincentive to foreign investors.

As Sydney, according to the NSW Department of Planning & Environment, needs 33,200 new homes a year – but last financial year only built 27,348 homes – there is a creeping undersupply that is driving up prices.

To help with housing affordability many more homes need to be built and governments must encourage this outcome rather than distorting the market further through new regressive taxes.

Cumulatively, these measures will have huge impacts, likely to intensify the cooling of new development activity.

The new measures do not translate to cheaper prices for new domestic home buyers, as cynical Treasurers across the eastern seaboard are claiming.

One precedent from a decade ago is apposite. In 2004 the then NSW Carr government imposed an extra 2.25 per cent tax on the sale of investment properties at a time when the housing market was already suffering a downturn. This extended and prolonged the property investment slump in that State. A year later Morris Iemma abolished property vendor duty immediately he became Premier.

Offshore investors account for up to 20 per cent of pre-sales in Australia’s capital cities, and help ensure projects move from concept to construction. Many developers require some foreign buyers to make their projects stack up financially.

As well, related research shows that the majority of Chinese consumer inquiries for Australian property investments are for properties below $500,000. Without some offshore investors, many projects generating affordable supply will not be built.

Whoever wins federally on 2 July should have a serious look at housing affordability. The Productivity Commission and many other reports point the way to necessary reforms.

As a society we fail without a viable, sustainable, affordable housing sector. The potential solutions are complex. Many are controversial. The excessive regulation of housing delivery, numerous ‘pay or else’ statutory charges, poor urban planning delivery, sluggish bureaucratic approval processes, and a host of other inefficiencies are holding us back. Poor policy imposes considerable costs on potential new housing purchasers. The taxation regimes – which were supposed to be standardised with the GST’s introduction – and the regulatory environment are also part of the wider problem.

At a time of record investment in new transport infrastructure across the land, Australia must get the policy settings right, by matching progressive urban policy with new infrastructure spend.

In the longer term, we will rue the day we failed to get that right, too.

A recent report on ‘Australia’s Diaspora Advantage Realising the potential for building transnational business networks with Asia’ reveals the imprint of old habits, either conscious or unconscious, still affects Asian, including Asian-Australian, impressions of Australia as a place to do business. The bamboo ceiling is still in place. We look pale and stale. The recent flurry of tax slugs by several state governments reinforce bad impressions we thought had been overcome.

Governments across the nation are taking the wrong approach to tax – acting like children in a toy shop. All the while avoiding durable policies – lest the fun be curtailed. Competitive federalism in taxing foreigners investing in housing supply is a sick joke.