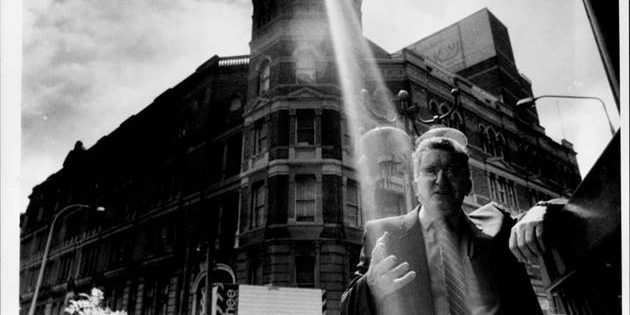 The passing of Vincent Joseph (“Vince”) Higgins, union and Catholic activist, sees the demise of an important link to the turbulent clashes in the labour movement of the 1950s.

Last of seven children born to James and Mary Josephine Higgins, in the late 1920s and early 1930s reared in an inner-Sydney working class family, he had familiarity with tough times, uncertain employment, thrift, battles for social justice. Typical of similar children, he left school aged 14.

One vivid memory was the commotion in school grounds on news that the Japanese had bombed Pearl Harbour. Vince could not wait to ask where Hawaii was. Work began as a telegram boy, then the NSW Department of Motor Transport and Tramways, with fire warden duties. Joining the Air Cadets, his formal RAAF enlistment prevented by the War’s ending. Undeterred, he enlisted with the army, sent in 1947 to Hiroshima prefecture, Japan, an area still devastated by nuclear holocaust.

In 1949 he returned to civilian life, working in clerical jobs, joining the Federated Clerks’ Union (FCU) where he met his wife, Mary, née Quoyle.

A tumultuous time in the Australian labour movement, the Chifley Labor government battled the communists, with industrial relations strife, coal strikes and blackouts; threats of nationalisation of the banks; and in December 1949, the election of the conservative Menzies government.

Higgins saw faith in the Church and Labor unite in the union anti-communist fight. Although sometimes portrayed as a contest between conservative and radical forces, most of the ALP Industrial Group and Catholic Action activists saw themselves at one with the values of the labour movement. There was nothing “outside” the ALP’s traditions in what they fought.

The FCU was led by the wily tactician Jack Hughes, who hid membership of the communist party. At a union meeting in 1951 Hughes said Australian troops fighting in Korea used germ warfare. Higgins rose to challenge this lie, causing other right-wing Labor unionists to see his leadership potential.

In FCU elections in 1952, the communists were swept from office. In NSW in 1953 Higgins was appointed full-time union Organiser, becoming Assistant Secretary in 1960, NSW Secretary in 1980, retiring in 1994. Under successors, the union merged into the Australian Services Union (ASU).

The ALP split in Victoria (1955) and Queensland (1957) saw much of the FCU leadership leave the ALP, many supporting the Democratic Labor Party (DLP), aligned to an anti-communist catholic lay movement, eventually called the National Civic Council (NCC).  NSW, however, saw limited defections to the DLP; the local Church hierarchy was unsympathetic and opposed the NCC, in contrast to Higgins’ views.

Most of the NSW union officials drifted back into the ALP, including Joe Riordan (future Whitlam government Minister) and Phil O’Toole, eventually NSW Secretary.

A critical fracture point came when Higgins, part of the NSW Branch delegation, voted in the early 1960s with the Maynes forces (the Victorian NCC-based faction), giving them national union control.

After O’Toole retired, and after 27 years in check as an official in the NSW Branch, Higgins was elected NSW leader.

For the new union secretary, there were major challenges; the technological revolution and business changes generally saw large-scale employment of clerical workers disappear in some industries and considerably diminish in others. The union lost strength, particularly after the ACTU campaigned in favour of union re-organisation.

Links with another right-wing union, the shop assistants’, frayed. In retail, office workers were FCU represented, other retail workers by the SDA. The latter, with ACTU support, claimed everyone; by the end of the 1980s the FCU presence mostly disappeared. Absorption also occurred in the maritime industry where the FCU once had a distinctive, independent presence. In the Australian Tax Office, the members also transferred, this time to the Commonwealth Public Sector Union.

As union density generally began to plummet, the Clerks’ Union membership collapsed. Higgins became a critic of “The Accord”.

Additionally, in the 1980s, the union leadership in Queensland and Victoria were under siege, elections lost to the Left, and the national office under threat. To Higgins’ considerable credit, the NSW elections were comfortably won, the relation between the union leaders, the organisers, activists and members being closer than anywhere else in the country.

More widely, Higgins served on the Labor Council of NSW executive, regarded as a thoughtful, powerful advocate of industry-wide bargaining, the traditional award system, and importance of unions in civilising capitalism. One favourite role was as Chair of the Trades Hall Association. The Labor Council supported his nomination to the governing Board of what became UTS.

Outside union activity, Higgins volunteered in disability services including, from the early 1960s, involvement with the Sutherland Handicapped Centre Committee, then with the Parents and Friends Associations at Westmead Hospital and Rydalmere Psychiatric Hospital, serving in various roles from President to working on the fetes.

At his funeral at St Joseph’s, Jannali, his children reminded the congregation that Higgins was more than a just union man; he was husband, father, role model, an inspiration. His daughter Margaret talked about the happy times, family outings, sports, a fulfilled, happy life.

As he aged, Higgins looked back on a life defending the dignity of ordinary folk. He was never a household name, never the most influential of his generation. But he stayed true to his faith, principles, and integrity, respected across the political spectrum. He believed in something – an interesting contrast to some in the movement who followed.

His wife predeceased him in 2007; he is survived by six children, their partners, nine grandchildren and five great grandchildren.

Keith Harvey is a former national industrial officer of the FCU and the ASU; Michael Easson Secretary, the Labor Council of NSW, 1989-1994.