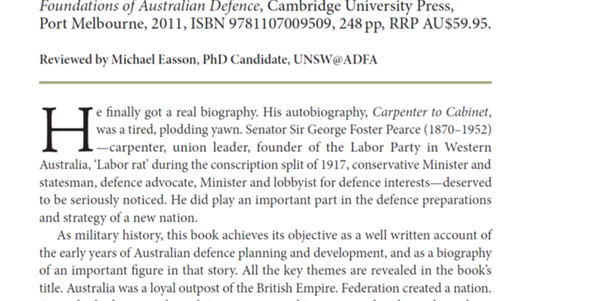 He finally got a real biography. His autobiography, Carpenter to Cabinet, was a tired, plodding yawn.  Senator Sir George Foster Pearce (1870-1952), carpenter, union leader, founder of the Labor Party in Western Australia, ‘Labor rat’ during the conscription split of 1917, conservative Minister and statesman, defence advocate, Minister and lobbyist for defence interests – deserved to be seriously noticed.  He did play an important part in the defence preparations and strategy of a new nation.

As military history, this book achieves its objective as a well-written account of the early years of Australian defence planning and development, and as a biography of an important figure in that story. All the key themes are revealed in the book’s title.  Australia was a loyal outpost of the British Empire. Federation created a nation. Australia had to wrestle with its own national interests and reckon where those fitted with Great Britain’s. What should Empire and country do? The First World War brought all those matters into sharp conflict. ANZAC was an Empire event and decisive in the shaping of Australian myths, including our military history. In tackling these themes, the linking of political and defence issues, and debate on the options of Defence policy, Connor has written an extremely competent assessment.

David Malouf in his Boyer Lectures, Spirit of Play (1998) captures some of the spirit of the Australians, like Pearce, who saw no contradiction between being British, Empire loyalists and yet proudly Australian.  Even so, Malouf says: ‘The idea grew up that if we could only keep ourselves pure in a contaminated world – morally pure, but racially pure, as well – it would be our privilege, as a nation, one day, to carry forward into history the British ideal.”  The tensions associated with that ideal are conveyed in Connor’s book.

The dilemma for this biography is what more can be said than that the subject was ‘there’ during a period of stress, strain and nation-building? A complication in this case was that Pearce culled from his ‘official papers’ material revealing his internal life. One senses that the man was not worth the prodigious effort. Yet in the piecing together and writing of the first forty years of Australian defence planning, Pearce was everywhere. He was one of the WA Labor’s first senators. Defence was the ‘topic’ he chose to specialise in the Parliament. More by dint of speaking often enough on the topic than any profound insights, Pearce was seen as an ‘expert’, and eventually became the minister. There is no doubt that Pearce deserves strong biographical treatment. He was Australia’s longest serving Defence Minister (1908-09, 1910-13, 1914-21, 1932-34) and over a thirty-five year period influenced and sometimes dominated public discussion on defence issues.

In three major respects Pearce had a massive impact. First, he was one of the founders of Royal Military College, Duntroon; second, in 1917 Pearce told Prime Minister Billy Hughes that the Allies were losing the war and that more troops were required. Thus, Pearce was highly influential in Hughes’s decision for the need for a second conscription referendum — that split the ALP. Third, in the commemoration of Anzac Day, though largely in sensing the public’s mood, he contributed to the shaping of the Anzac legend and style of commemoration.

Connor proposes that there were other achievements and positive effects too, but he is often unconvincing. (For example, surely Deakin was far more articulate and influential than Pearce in articulating an Australian, self-reliant within the Empire, defence policy.) To his credit, Pearce often called on British expertise. Sometimes there were very good consequences. But Pearce’s lack of confident knowledge of where Australian troops were during the war, how they were being led and supported, and a cavalier approach to the obtaining of defence materiel suggests that Pearce was a poor minister. At one point the lack of business management advice and principles of management are explained away as a Labor man’s prejudice against capitalism and capitalists (p. 101).

There seems to be ambivalence about Pearce by the author, whose research is astonishing; but does Pearce deserve such industry? We are lucky he attracted such attention. We now know an enormous amount about the early years of defence planning, the poor staffing (nearly all of the public servants were degreeless with scant knowledge of defence strategy) and the generally woolly wobbliness about ideas, priorities and funding. The conduct of the First World War, on the Australian side, was a lesson in bravery, drive and shambles.

If Pearce was a more substantial, interesting figure, if his papers were replete with interesting material and laden with strategic thinking, our author might have whiled away his time, one box at a time, sifting through this rich lode, weighing gems of insight and weaving it all into a coherent story.

Connor says that ‘George Foster Pearce was a man of limited talents but he remains an important figure in Australian political history, and not merely because he remains the nation’s longest-serving Defence Minister’ (p. 168). Elsewhere, Connor remarks, ‘Pearce was a great Defence Minister, but his failure to administer his department adequately during the First World War cannot be ignored’ (p. 124). Perhaps our author, setting out confident at the start that there would be material of interest, found that the local quarry was almost bare. Hence Connor needed to turn to resourceful scholarship in Canadian, British, Irish and New Zealand archives, making comparisons with what other Empire ministers and commanders were doing.

All this is very good. But there is no turning away from the fact that Pearce was a divisive figure, an incompetent minister, a bloviating fool, a hopeless administrator, who did not attract respect from the Australian command under his control. Yet he was immensely important. Before the Great War we find Pearce ranting that the British alliance with Japan ‘degraded’ the Empire. Elsewhere we read about Pearce during the war vindictively interning people he did not like. One such was a German born priest in South Australia, who arrived as a young infant, who was imprisoned throughout the conflict and deported on ministerial orders in 1920. During the conscription referenda Pearce’s clumsy censorship contributed to the annoyance of sections of the population, who might otherwise have been sympathetic, to oppose conscription. He interfered in a Royal Commission into his handling of corrupt practices in defence supply in ways that caused his colleagues to demand his resignation.

Few Australian political figures have ever been as despised as Pearce. A typical Claude Marquet cartoon in the Worker would have him drifting, paddle free, sail-less, in a small rubber dinghy, lost at sea. When in 1916 he served as Acting Prime Minister for seven months, while Hughes visited the UK and France, the West Australian opined that, with Pearce at the helm, the country would be ‘drifting aimlessly’. When he announced that Brigadier-General Gustave Ramaciotti would take charge of defence supply matters, as Pearce’s ‘eyes and ears’, the Bulletin commented that: ‘It sounds like a confession that for three years we have had a blind and deaf man in charge of the Defence Department; and there have been times when this paper also suspected that he didn’t have much of a sense of smell.’  Connor does not dispel our feeling that the man was a bit of a dud.

The book fits in nice vignettes such as Pearce’s medical advice to take up smoking to calm his nerves. Pearce’s part in engineering Stanley Melbourne Bruce’s rise to the top in the UAP and the Prime Ministership is well told. Pearce’s warnings as Minister for External Affairs (1934-37) about the need to re-arm in the mid 1930s onwards sound plausible and prescient. But the uncertainty of claim and achievement against the evidence probably caused Connor to excel in scholarship. If Pearce was a better man, sure of achievement, we might have had a less interesting book.

I should have mentioned Peter Heydon’s book, Quiet Decision. A Study of George Foster Pearce, Melbourne University Press, Carlton, 1965. Heydon was Pearce’s principal private secretary from 1936-37 and of Prime Minister Menzies in 1938 and Lord Stanley Bruce in 1939.

This review I wrote in response to a request from Malcolm McGregor, who I had known when he worked for the NSW ALP office in the early 1980s. (He had subsequently drifted politically in all sorts of directions, including across the political divide, and I had lost touch. We were never close. He wrote a hostile column in the Australian Financial Review in 1993 when speculation arose about Mary Easson, my wife, running for Paul Keating’s old electorate of Blaxland.)

McGregor was with Australian Army as the Director of the Land Warfare Studies Centre and in a telephone call invoked the name of a mutual friend, Greg Sheridan, in urging me to write for The Australian Army Journal. He had something to do with the editing. I thought it strange that McGregor never rang or contacted me about the piece afterwards. But then, like most people, I later learnt he went on medical leave and had undergone a transition to become Cate McGregor, a story perplexing and moving. At the 2016 Association of Superannuation Funds Conference she spoke about that personal journey.