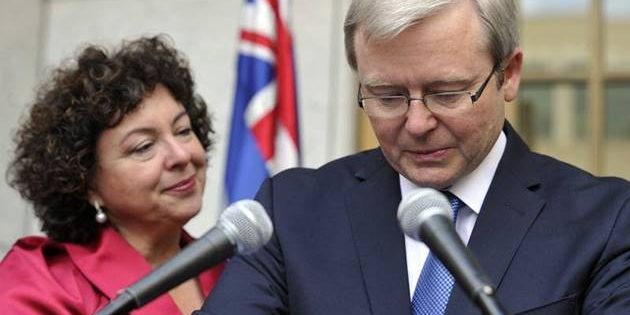 Mary and I are distraught at the events of the past week. You would not be human if feelings of anger and revenge are not crowding your thoughts at the moment.

I write as someone who admires you, and believes that the stinking treacheries of the past week are an outrage.

There are only two paths ahead: disgrace or rehabilitation.

On the former, this is where we are. In industrial relations you are supposed to get warnings before you are out the door. Yet it is Work Choices for Prime Ministers.

Yesterday’s refusal to include you in the Cabinet and the reasons stated for that only add injury to the insult.

Years ago Julia was loud and effective in arguing that “we respect our former leaders”. Hence various successful efforts to ‘save’ Simon Crean from the Shadow Ministry, from preselection defeat, from oblivion. He did deserve respect. I am old fashioned enough to believe we respect our Labor heroes – when they are ready, willing, and able to continue to serve.

Lashing out, no matter how tempting, will only damage you and the party you have tried so hard to serve. Ultimately it would compound the humiliation and provide the usurpers with retrospective reasons. You are a better man than Mark Latham ever was. You must not do anything that gives the media and party an excuse to dismiss you in the same way.

To be rehabilitated, your mistakes need to be faced. You worked damn hard, with creativity and initiative. You tried to cram ten years work into two and a half. This week’s G20 Conference should have been a personal triumph. History will judge you more kindly than the comrades. What you achieved through the GFC, the big moves in health and tax and a myriad of improvements in helping “our people” stand out.  This is the important part of your record.

I am shocked by the lack of public support. I trust that Lindsay Tanner, the party’s most persuasive and articulate minister, will eventually publicly pay tribute at the right time, which is hopefully a few weeks away, after the new PM is more settled in.

Last Wednesday night, I rang Joe de Bruyn wanting him to counter Paul Howes’ intervention. Joe said he supported you, told you so at the last National SDA delegates’ conference, and that “the SDA sticks to its word”.

Yet the next day I read about the plotting of Mark Bishop, Don Farrell and Tony Burke –  core parts of the SDA block in Parliament.

Such a lack of support for you was so widespread that it cannot be explained away as merely mob factional bastardry or Julia’s treachery. It shows that you didn’t work well with your colleagues, that you were isolated and that you ignored too many people. Flawed governance was at the heart of this.

The political reality is that too many of your colleagues think you despised them, and even more believe that you ignored them completely (a worse political crime). So the daggers on the floor could have been wielded by cohorts, not merely a few factional chiefs.

I consider this a minor form of mass hysteria; but the phenomenon is undeniable.

Thus, rehabilitation requires deep reflection on your part, perhaps followed by a humble, gracious statement thanking the thousands of well-wishers who have contacted you PLUS reaching out to your colleagues saying something like “I worked very hard. I was truly unaware at the resentment of my colleagues. I am truly sorry to let down the party. I will do better. But please know I will be doing all in my power to re-elect the Gillard Labor government”.

Perhaps the timing of this should be early in an election campaign. I can imagine this being effective, especially in Queensland where there is the greatest shock and unease about the circumstances of your demise.

Trashing your legacy is pretty dumb politics, especially for the new PM aspiring to re-election. I am amazed by the negative assessment of your colleagues. How could they see things so differently to the man I know?

At the beginning of last week I had drafted a note to you on what needed to be done. Mary thought it too harsh and asked me to scrap it.

As self-serving and presumptive as it might seem for this political failure to proffer advice now, I want to do so because I believe that the ALP & Australia would be nuts to throw away your talents. To give up would be a big win for the cynical Arbib/Bitar way of running things. Please persevere.

With kind regards to Thérèse and your family,

“Thank you both for your genuine kindness.”

“I am far from perfect. But they are in the main engaged in the retrospective reconstruction of events to soothe what is left of conscience and courage. As for speaking out in my defence, the truth is they are frightened of the new power realities thru the new Graham Richardson and they now see the direct consequences of not bending the knee.”

I suppose I must have once mentioned my regard for Popper’s thought and his questioning of received wisdom.

Rudd alluded to the idea of not believing everything bad said about him.

I thought it was madness by the factional leaders in getting rid of Rudd, without pre-warning, or thinking through the consequences.

I rang Paul Howes, the then national secretary of the Australian Workers’ Union, on the night the ABC television broadcast urging that he act to stop the move. It was too late. He was going on television that night to support Rudd’s removal. (He wrote an ill-advised book, Paul Howes, Confessions of a Faceless Man: Inside Campaign 2010 (2010).  Not withstanding my criticism, I consider Howes one of the great could-have-beens of the NSW labour movement. It is a tragedy (for Labor, perhaps not for him) that his talents seem now permanently lost to ALP politics. He has been an incredibly successful businessman subsequent to his union career.)

Weeks later I spoke to Johno Johnson, the legendary “keeper of conscience” for the NSW ALP. He told me that just as he was opposed in 1975 to Sir John Kerr dismissing without counsel or warning Prime Minister Gough Whitlam, so too was he appalled by “our people” without warning or counsel sacking Rudd. “It is anti-Labor”, he said.

Third, Robert Ray told some friends that he changed his phone number.  He would get calls from ministers complaining about this or that antic of Rudd, his ill-considered response to a policy initiative, his alleged poor conduct of Cabinet, etc.  Ray would usually respond: “And when you pointed that out [your criticism] to Rudd, how did he respond?”  There was usually silence at the other end of the phone.  The critics were too gutless say aloud what they thought, apparently.

When Nick Dyrenfurth asked me to comment on and help (in minor) edits of his book Getting the Blues (2019), I suggested some sentences to curtail or soften his anti-Rudd perspective, namely:

“… I am troubled by a comment attributed to a legendary Labor warrior and speechwriter, Graham Freudenberg.  When he died last July one of his friends [John Harding-Easson] posted: “Of all the memories, one that stays with me was in the aftermath of Rudd’s removal.  Dad and I were sitting with him in the foyer of the Rydges [hotel] in Kings Cross, and I was arguing the case for [Rudd’s removal]. Reflecting on a certain former employer of his, [Freudenberg] said: ‘If I were to recount for you every tantrum, insult, slight, jibe and Prima Donna act, I could draw for you a monster. And it wouldn’t be the person I knew’.”

Yet the anti-Rudd stories were considerable.  I never found him rude or difficult.  He was let down by his colleagues as much as himself.

So many people, however, argued with me about my criticisms of Rudd’s dismissal.  One insider wrote to me saying.

“A problem for those arguing that Rudd shouldn’t have been dropped is incomplete info compared with those who had to deal with him. (I’ve never forgotten… Martyn Evan’s complaint years ago that Rudd treated even his more intelligent colleagues like ComCar drivers). [Evans was a former federal Labor MP defeated in 2004.]

“Also, don’t assume that in this instance scientific analysis gets you far. In part the decision to be rid of Rudd was emotional. In part it was also a judgement concerning the abilities of Gillard as a politician. I can accept that judgement but I think it was botched (e.g., keeping Swan as Treasurer and now Dep PM).  NB: No-one I know wanted Rudd as a long term PM. NO-ONE! The majority decided to treat him with the same dignity he meted out to them.”

Yet I stand by my perspective. Sadly I think, too, that an able leader, Julie Gillard, was ruined by those events.

Just as with Morris Iemma in 2008, with his political execution in NSW, in Rudd’s case the faction leaders in NSW, principally Senator Arbib, as well as Victoria’s Bill Shorten and Senator Steve Conroy, did immense damage to the old labour traditions of loyalty, mateship, and fair play. The consequences still echo through Australian politics.