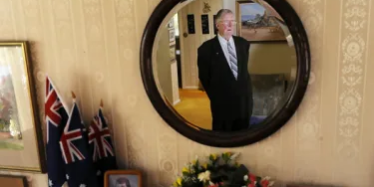 As the national leader of the Shop, Distributive and Allied Employees’ Association (the “shoppos” or “shoppies” union) from 1970 to 1995, Jim Maher was one of the most significant Australian unionists in the past 50 years. He created a powerful force, the country’s largest union, with an influential presence within the Australian Labor Party.

Everyone who knew him has a tale to tell about his impish grin, friendly style and joyful character. He loved life, liked a swim, looked the part of the boozy Irish Australian union leader, yet did not drink, kept a sober outlook on life and was determined never to lose sight of the seriousness of his role in representing his membership.

He retired from all duties associated with the union only in 2008, when he ceased to be a director of the Retail Employees’ Superannuation Trust Scheme, which he had help to found.

James Bernard Maher was born on August 20, 1927 and was educated at Christian Brothers College, Clifton Hill, in Melbourne.

He joined the ALP as a teenager, and as a young man he worked for Norman Makin, a Methodist lay preacher, federal MP for Hindmarsh and minister in the Curtin government. Maher would sometimes join Makin and friends, including Prime Minister John Curtin, at Aussie Rules matches.

In 1946, Makin was appointed ambassador to Washington and Maher needed employment elsewhere. He became a shop assistant and on January 1, 1956, was appointed as an organiser of the Victorian branch of the SDA, servicing country members.

This was a period of extreme tension in the ALP, as the split in its ranks had shattered old alliances and Maher left the party. Whether he joined the resultant Democratic Labor Party is unclear, but he supported its position – along with most politically active Catholics involved in Labor politics in Victoria at the time. The shoppies in Victoria disaffiliated from the ALP.

From 1968 to 1971, Maher was the assistant secretary of the union’s Victorian branch, and then became the secretary, a position he held until 1991.

In 1970, he also became the SDA’s national president, which was mainly an honorary role – most of the power then belonged to the semi-autonomous state branches. The union was conservative, undynamic and defensive – but change came. From the 1970s, the union’s membership grew, from 57,000 members Australia-wide in 1971 to nearly a quarter of a million today. One of Maher’s major challenges in the early 1970s came from the leadership of the NSW union under Barry Egan, who argued that it should professionally develop services for members.

In the mid-1970s, Egan merged his union with the NSW branch of the Australian Workers Union, which became the largest union in the NSW Right. In 1977, the then AWU president, Charlie Oliver, proposed a merger with the Building Workers Industrial Union.

The same year, Egan enlisted the support of Victorian ALP rightwingers to challenge Maher for the leadership of the Victorian branch. Fights for control in the SDA were breaking out across Australia. The rival Victorian ticket, Team for a Better Union, proposed to reaffiliate the union to the ALP. Maher moved closer to his traditional allies and relied on Joe de Bruyn, national secretary from 1978, to deal with the faction fights.

During these battles, the SDA’s garbage was searched by opponents looking for intelligence; long-range cameras snapped people going into the Melbourne headquarters of the Catholic-inspired National Civic Council (NCC). There were efforts to politically scalp any ALP member and union leader close to the DLP or the NCC. Brian Harradine, the president of the SDA in Tasmania, later to become an independent senator, was expelled from the ALP on the basis of alleged secret membership of the NCC.

Meanwhile, in NSW, the large employers refused to recognise the Egan union. The “shoppies” galvanised mass rank-and-file defections from the AWU, horrified at merging with the communist-controlled BWIU. The SDA national office set up a rival union.  Reliable recruits for union office were sought.

Bit by bit, with the SDA getting considerable backing of employers, the Egan presence dwindled to strongholds on the South Coast.  Legal challenges to the original NSW AWU merger were successful.  Maher’s forces won, but adapted some of Egan’s more creative ideas.

In his latter period as SDA national president, Maher reaffiliated his union with the ALP in Victoria. He served as a member of the ACTU executive from 1980 to 1993, and then another five years as vice-president.

Maher also played a major role in the international union federation, FIET. He championed and lent financial and moral support to Solidarnosc, the Polish union and social movement. The SDA sponsored several visits to Australia by Solidarity leaders in the 1980s.

Maher was a disciplined, practical union leader who weathered isolation and hatred and gradually re-entered the fold of the ALP, at first in suspicion and hostility (he was spat on at the 1984 reaffiliation ALP conference in Victoria), and then as a natural, vital, if conservative, strand in modern Labor.

Maher was awarded the Order of Australia in 1988. He was also honoured by the Polish government.

Jim Maher is survived by his wife, Frances (Fran, née Hains) and his extended family.

Jim Maher was everyone’s most likeable “Grouper”, as the old ALP Industrial Group cadre were known (either affectionately, as with many in the NSW ALP Right or with hostility, as was the case with most of the Victorian ALP membership, post the ALP Split.)

We used to regularly catch up for dinners during ACTU Executive meetings. Jim told many stories and in my obituary I tried to convey something about his personality.

I am sure he never expected to rejoin the ALP, though that hope never departed. And in 1985 he was able to lead the Victorian branch of the SDA back in the fold.

Before I knew my wife, as Mary Alexander, Mary ran for Victorian President of the SDA. She was influenced by Egan. And in Victoria she wanted the SDA to affiliate to the ALP. I was always more conservative and sympathetic to their tradition than Mary; and the SDA leadership supported me in every way they could. That was more to do with their respect for the leadership of the Labor Council of NSW, but also due to ideological overlap and affinity. When Barrie Unsworth decided in 1983 to move to a full time role in the NSW Legislative Council, the then NSW SDA secretary, Brian O’Neill (a former acolyte turned apostate of Barry Egan) raised with Unsworth and incoming Secretary John MacBean whether I would be manipulated by Mary to be anti- the SDA national leadership, etc. Joe de Bruyn, then based in Sydney, came to see me, and separately Unsworth and MacBean, to advise that I had the full support of Jim and the SDA national leadership.

In March 1992, Jim and I were the ACTU delegates to the International Confederation of Free Trade Unions’ conference in Caracas, Venezuela.  One Sunday we walked from our hotel to Mass. We noticed the tanks outside. (It was the corrupt era of President Carlos Andrés Pérez, 1922-2010; President, 1974-1974 & 1989-1993. Several military coups were attempted in 1992.) Jim and I joked that at least the tanks were pointed away from our hotel.

On our walk back from church I canvassed the idea of Anna Booth one day becoming ACTU President. At the time Martin Ferguson (1953- ) was ACTU President, but I saw him eventually seeking a career in the national parliament.) Booth was then the National Secretary of the Textile and Clothing Workers Union, vivacious, bright, intelligent and articulate — and looking very middle class — that is to say, reassuring to anyone at the margin of the union movement. She would appeal to women, young people and the growing middle class: people the movement needed as members.

With union amalgamations and associated change, together with an unpredictable post- cold war era, I thought it likely that the Left would have the numbers in the ACTU. Behind such thinking was detailed mapping and projection of likely trends. I was not thinking or acting on a whim. So why not be pro-active, select, and back someone whom we could work with?

I speculated that her radicalism was now measured and tempered by experience. I found her sensible on almost all matters. She is someone we could live with, I urged. Jim was non-committal, anxious and sceptical.

The next morning, before the Conference resumed, Jim told me that he had not slept well. He thought Booth was unappealing, too feminist, too much of an unknown. I thought it best to respond by saying: “Don’t worry Jim. It will be up to Bill [Kelty, the ACTU Secretary] anyway. If there’s someone better, we go with that.”

(In the end, Ferguson won election to the federal parliament in 1996, the then Assistant Secretary of the ACTU, Jenny George (1947- ), took over the ACTU Presidency the same year.

Anna would have made an outstanding ACTU President.  But by the time the next vacancy arose she was no longer available — as Booth quit her role with the union in 1995 and pursued other career choices. I greatly admire her exhausting effort in looking after her daughter Clare, who has severe learning and associated social handicaps. But that is a topic for another day,

Joe de Bruyn told me that, contrary to my obituary, Jim did like a drink. The Irish Catholics tended to be like that or abstemious, with some teetolallers. I am not sure how I misremembered.