(2010) Get Governance Right and Governing Follows 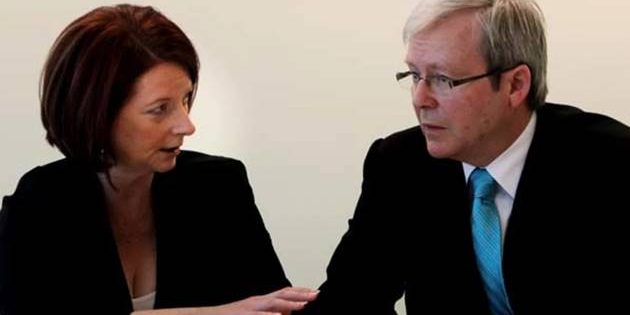 That was the beginning of the end of Rudd’s electoral popularity. Now they have the chutzpah to clean up the mess they made with a new leader. The machine men got their way – both times. As Paul Keating once said, without a trace of irony, “where goes NSW so goes federal Labor.”

The new Prime Minister, Julia Gillard, as Rudd’s deputy, went along with every decision of her leader, never uttering a peep in criticism. This was called loyalty. Gillard let Rudd down, however, by keeping any reservations mostly to herself.

Thus, on Thursday, a hard-working man was thrown to the dogs. His management style was often woeful. Yet it didn’t have to end like this. It’s a pity the same effort that went into the challenge wasn’t put into counselling Rudd on doing the job better.

Wary of the government’s competence, a fickle electorate is capable of doing anything at the federal poll due by April 2011 and likely to be called in the next few weeks.

The new government starts as underdog. To win, the Gillard government requires a combination of actions: better presentation, clarity in decision making, better decisions, openness to fresh ideas, more bravery and less waffle. Plus changes and refinements to policy implementation and, especially, governance.

What were the main problems? They were to do with governance, mostly. The selling of the message and the actual decisions were related.

Under Rudd, decision-making was cramped and limited with inadequate input from ministers and “hard heads”. Sometimes it seemed that the former PM was in such in a hurry that none of his ministers could be sure what was happening.

The Hawke cabinet model is the exemplar that should be followed.  As prime minister, Bob Hawke encouraged the wide discussion of issues, encouraged ministers to express opinions and criticisms. He did so with an inner and outer cabinet. He learnt from Gough Whitlam’s mistakes. Papers were circulated the best part of a week beforehand – not the evening before or the day of the meeting. Ministers didn’t feel like they were letting a colleague down if they criticised a proposal. At least that was the atmosphere Hawke encouraged. It was team-like and efficient.

The Keating cabinet was more of a cabal, with fewer meetings, greater secrecy, more of an attitude in the PM’s office that they had to keep things “tight” and in control.

Understandably, Rudd was overwhelmed by the global financial crisis as he came to office. Yet the loss of cabinet input meant the loss of ideas and the careful evaluation of weaknesses in decision-making. Modern management is largely about canvassing widely, thinking through weaknesses, then deciding. Decisions in the next term will be more about consolidation, more about governing in normal times. That’s another reason why the governance model needs to change now. It looks strong to do so.  Gillard mentioned yesterday that she will be more consultative. How she governs will be the crux of her success as PM.

A common view is that the government only spins. Yet the evidence is telling and overwhelming – they don’t seem to spend enough time thinking about the content and the sale. Messages, where there were any, were often convoluted and crude.

Rudd did not lead a government of “spin”. The government spun too little.

Seemingly exhausted by the process entailed in reaching a decision, there wasn’t enough keen interest in making a difference thereafter.

This undisciplined approach engendered complacency, such as with the “elegant” resource tax. I wonder if, within government, this idea was assumed to be a “cert.” once it was recast as a “super profits tax”. Half-baked one-liners and clichés encourage suspicion.

On the specific issues – mining, ETS [emissions trading system], health and others, the new PM needs to talk openly about what they are doing, never underestimating the intelligence of the people.

The electorate seems to think that China saved us, that Australia got lucky and that the government wasted a lot of the cash in useless projects. The government can’t whine that this is unfair. It needs to sound humble and firm: the government is proven in a crisis. The public needs convincing.

To win a second term, Gillard needs to govern well and zoom in on simple, believable messages.  Messages need to be refined along the lines that the government is consolidating on big reforms. And Gillard would be well advised to keep a distance from the failed people and processes, the machine men that tore Macquarie Street apart.

Winning with enhanced authority at the forthcoming election is possible. But to do so, the past faults need to be understood.

In the weeks before his dismissal, with the Minister for Finance, Lindsay Tanner, I drafted a note to Prime Minister Rudd about how his government appeared on the outside of the Canberra bubble, that it seemed that governance was chaotic. I wanted to offer counsel. This article was crafted from what I had drafted earlier.

I included in the longer piece a reference to Patrick Lencioni’s book The Five Dysfunctions of a Team. Politicians could well benefit some consideration of some of the better business books that come along. Many are unreadable. But this book I keep returning to.