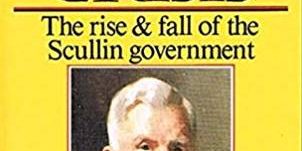 Alan Reid’s introduction to the re-issue of Warren Denning’s handsomely illustrated Caucus Crisis contains a revealing memoir of the author of the classic account of the Scullin government and the Great Depression.

Reid describes Denning as “that old seadog”, the “plump Buddha” pronouncing on the weakness of the politician of the day. This image of the shrewd commentator is exactly the reputation Denning would like. Reid quotes a warning Denning freely issued: “Don’t get obsessed with details, my boy – always try to takle the broad view.”

Caucus Crisis is not obsessed with details. As the author explains: “I have concerned myself with causes and consequences, rather than events.”  The distinction drawn here between events, causes and consequences is not clear. Indeed much of what is offered by Denning as explanation of the economic troubles during the Depression crumbles on close inspection.

Denning is decidedly weak in his discussion of the economic difficulties which confronted James Scullin and his ministry. In one piece he claims that “the medicine which Sir Otto Niemeyer prescribed for Australia, was therefore, long overdue.” This conclusion follows a few sentences concerning the issue of government borrowings. Towards the end of the book an equally feeble discussion takes place about whether the federal system of government is appropriate in times of severe economic crisis. The broad view can also be a shallow view.

Denning’s book, however, deserves to be read not for its obvious failings, but for how it describes the reactions of the Labor government to those times.

Nothing stood out in more instructive relief, in these eventful days, than the realisation that even the biggest figures among these men who were supposed to be guiding the ship of state, knew almost nothing of the consequences of what they might be doing. They entered each conference in a daze, and left in bewilderment.  Some of them, supposedly important figures in the public life of Australia, would at times do their best to give newspapermen an intelligent precis of what was taking place, in conferences at which they had just been sitting. They would fail so sadly that we began to regard them, desperately placed as we to learn something of the doings at these secret conclaves, more as a menance than as a help. Others simply closed their mouths.

Denning’s book abounds with material of this kind which explains that within the Scullin government “the force, the vitality, the alertness, the belief in the future had gone.”

Here and there Denning is able to capture the pathos and loneliness of Prime Minister Scullin, the man who in Don Rawson’s telling comment “failed, even at failure.”

For some penetrating pen-portraits and acute comments, Denning’s work deserves to be read by anyone interested in the moral and personal aspects of Labor politics during the Great Depression.