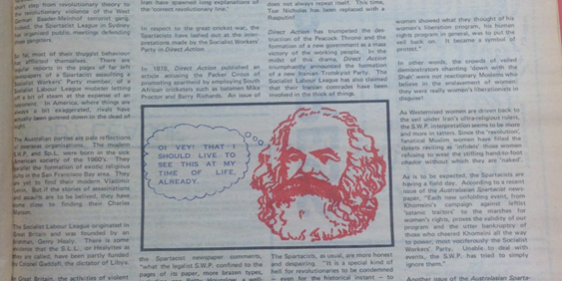 On the left fringe of Australian politics exist several madcap political parties which are fiercely competitive. The Spartacist League of Australia (SpL) and the Socialist Labour League (SLL), each produce a regular newspaper, command the support of a handful of supporters and are continually beset with factional disputes, expulsions, splits and resignations.

Both parties vigorously attack each other as well as the Socialist Workers’ Party (SWP), another revolutionary sect which publishes the Direct Action newspaper, as ‘reformist’, ‘anti-working class’ and traitors to the revolutionary traditions of Trotskyism. Each party proclaims that it alone is the standard bearer of revolutionary thought in Australia.

The activities of members of the SWP, SLL and SpL are of interest not only as cases for the psychiatrist’s couch. Their proclamations and propaganda preach the overthrow, violent if necessary, of Australian society. The revolutionary slogans ‘smash capitalism’, ‘destroy the reformist trade union misleaders’, etc., are the passionate convictions of these fanatics. In certain political sects, it is a short step from revolutionary theory to the revolutionary violence of the West German Baader-Meinhof terrorist gang.  Indeed, the Spartacist League in Sydney has organised public meetings defending those gangsters.

So far most of their thuggish behaviour has afflicted themselves. There are regular reports in the pages of far left newspapers of a Spartacist assaulting a Socialist Workers Party member, of a Socialist Labour League mobster letting off a bit of steam at the expense of an opponent. In America, where things are always exaggerated, rivals have actually been gunned down in the death of night. The Australian parties are pale reflections of overseas organisations. The modern SWP and SpL were born in the sick American society of the 1960s. They parallel the formation of exotic religious cults in the San Francisco Bay area. They are yet to find their modern Vladimir Lenin. But if the stories of assassinations and assaults are to be believed, they have come close to finding their Charles Manson.

The Socialist Labour League originated in Great Britain and was founded by an Irishman, Gerry Healy. There is some evidence that the SLL or Healyites have been partly funded by Colonel Gaddafi, the wild dictator of Libya.

In Great Britain, the activities of violent extremists within and outside of the British Labour Party led to the establishment by the Party of the Underhill Committee to investigate these problems. According to the Committee’s report, various Trotskyists groups have attempted to infiltrate the British Labour Party.  The Report also blamed the Socialist Labour League for many of the bashings of British trade union leaders.

Workers News, the official, twice weekly newspaper of the SLL regularly carries venomous attacks on the SWP. In a recent issue it alleged that the American SWP is full of police spies and that the Australian party is similarly tainted. An article states, “the complete degeneration and anti-Trotskyist nature of the SWP has now been revealed in the United States where it has offered the US government a deal to accept $5 million in exchange for keeping the identities of eighteen FBI agents in its leadership a secret.” Furthermore, the article describes Joseph Hansen, the former leader of the SWP, as “a proven FBI and KGB agent.” How on earth Hansen, who has furiously operated in the torrid world of Trotskyism for more than forty years, could be in the pay of both the USSR and USA governments is difficult to comprehend. A close scrutiny of this article and other ‘supporting’ literature of the SLL will not yield any proof for these allegations. The inescapable conclusion is that such accusations are the product of the fevered imaginations of SLL operatives.

The Socialist Labour League, however, is not the most rabidly insulting creature on the far left. For devotees of the sport, the Spartacist League newspaper The Australasian Spartacist provides hours of entertainment.

Issues as diverse as World Series Cricket and the wearing of the veil by women in Iran have spawned long explanations of the ‘correct revolutionary line’.

In respect to the great cricket war, the Spartacists have lashed out at the interpretations made by the Socialist Workers Party in Direct Action.

Last year Direct Action published an article accusing the “Packer circus” of promoting apartheid by employing South African cricketers such as batsmen Mike Proctor and Barry Richards. The Spartacist newspaper comments, “what the legalist SWP confined to the pages of its paper, more brazen types, including one Betty Hounslow, a well-known Sydney SWP ‘Marxist Feminist’, put into ‘revolutionary’ practice. On the first day of a WSC [World Series Cricket] Super Test in Sydney last year, Hounslow and a small group of supporters stormed the pitch and accosted Richards while he was batting. In all consistency, Hounslow and the SWP should protest against Australian sportsmen as ‘ambassadors’ of the genocide of the Aboriginals.” Obscure figures involved in pathetic protests are easy game for the Spartacists who are known as the most tenacious, bitter outfit on the far left.

The Spartacists have even ventured so far as to accuse the SWP of having succumbed to the establishment cricket view of the World Series fracas. Self-righteously the Spartacist newspaper blurted: “we do not begrudge first class cricketers’ attempts to maximise their earnings.”

Of the Australian Cricket Board position, The Australasian Spartacist commented: “That these faded colonialist fossils can denounce as ‘mercenaries’ a Vivian Richards or an Andy Roberts, sons of Antiguan fishermen and sharecroppers, for utilising their great athletic talents to escape from the grinding poverty which is the lot of the great mass of West Indian youth, is the height of hypocrisy. Yet it found its echoes in the reformist ‘left’ – that is, the Socialist Workers Party.” So much for the ‘revolutionary’ angle on the current cricket controversy.

The turmoil in Iran has created plenty of excitement in revolutionary circles.  All of the fanatical organisations mentioned in this article have seen shades of ‘October 1917’ in the overthrow of the Shah and the triumph of the Ayatollah Khomeini.  Parallels have been drawn between the aeroplane which carried the Ayatollah home from exile and the sealed train which carried Lenin into the midst of the Russian Revolution.  History, however, does not always repeat itself. This time Tsar Nicholas has been replaced with a Rasputin!

Direct Action has trumpeted the destruction of the Peacock Throne and the formation of a new government as a mass victory of the working people.  In the midst of this drama Direct Action triumphantly announced the formation of a new Iranian Trotskyist Party. The Socialist Labour League has also claimed that their Iranian comrades have been involved in the thick of things.

The Spartacists, as usual, are more honest and despairing: “It is a special kind of hell for revolutionaries to be condemned – even for the historical instant – to witness great events without being able to influence them. We saw it coming in Iran and we said it straight. But our class in Iran was sealed off from even the simple political truth by decades of class collaboration of the mass reformist parties and the continuing bottomless opportunism of the left.”

Within the Spartacist League, tempers have boiled over the interpretation by the SWP of the wearing of the veil by Iranian women. Ms Cindy Jaquith, the SWP reporter in Teheran, gushed in one of her columns “what you really have …is the most classical example of a revolution that we have seen since the Russian Revolution.” Furthermore, in a strange twist of reasoning, Jaquith defended the veil, the ancient symbol of feudal oppression, as a “symbol of resistance.” According to her, the Shah used the women’s liberation campaign as a means to buttress his support amongst the middle class and weaken the influence of the religious hierarchy opposed to him.  As she put it in Direct Action: “Well, it’s no wonder then that when the demonstrations against the Shah began, one way the women showed what they thought of his women’s liberation program, his human rights program in general, was to put the veil back on. It became a symbol of protest.” In other words, the crowds of veiled demonstrators chanting ‘down with the Shah’ were not reactionary Moslems who believe in the enslavement of women: they were really women’s liberationists in disguise!

As westernised Iranian women are driven back to the veil under Iran’s ultra-religious rulers, the SWP interpretation seems to be more and more in tatters.  Since the ‘revolution’, fanatical Muslim women have filled the streets reviling as ‘infidels’ those women refusing to wear the stifling hand and head to foot chador without which they are ‘naked’.

As to be expected, the Spartacists are having a field day. According to a recent issue of the Australasian Spartacist newspaper: “Each new unfolding event, from Khomeini’s campaign against leftist ‘satanic traitors’ to the marches for women’s rights, proves the validity of our program and the utter bankruptcy of those who cheered Khomeini all the way to power, most vociferously the Socialist Workers’ Party. Unable to deal with events, the SWP has tried to simply ignore them.”

Another issue of the Australasian Spartacist puts it more strongly: “You can really see why we call them fake lefts when you watch all the opportunists falling over themselves trying to outdo each other in grovelling before the ‘Islamic Revolution’ in Iran.”

The most frequent paranoid accusations, enthusiasms for ‘more revolutionary than thou’ debates and penchant for cranky invective are common characteristics of the political parties mentioned in this article. Only the most tenuous connections exist between these extremists and the broad labour movement. Much of the energy of those who lurk in such organisations is frittered away in perpetual sniping at each other rather than at the conservatives – who are supposed to be the real enemy. The behaviour of the Socialist Labour League, Spartacist League and Socialist Workers Party members confirms an old dictum:  A fanatic is someone who redoubles his efforts once he has lost sight of his goals.

Kerrie and Stephen Magee were ALP aligned former Macquarie university student leaders who asked me to write this article. I arranged for Stephen’s employment at the Labor Council of NSW as Legal Officer for a time, under Barrie Unsworth. But he left under John MacBean.

Up until the early 1980s, I used to follow the far left newspapers, including the more mainstream, communist Tribune.

The Spartacists were so doctrinaire that the contortions of their thinking ended up being hilarious – as if a dry comic, perfectly familiar with far-left ideology was penning their propaganda.  Take for example, this Spartacist poster from the UK defending “the right of the deformed workers’ state of North Korea to acquire nuclear weapons”:

Mentioned in the article, Joseph Leroy Hansen (1910-1979) was a Trotskyist who developed a theory in defence of the Cuban revolution. Laurie Short, of the old Federated Ironworkers Association, told me that this erstwhile Trot had found a way to defend a Stalinist regime, a perversion of what Trotskyism, historically, had stood for.

A narrative concerning Trotskyism, the far left, and its myriad splits were satirised in the movie Life of Brian:

BRIAN: Are you the Judean People’s Front

BRIAN: Can I… join your group?

BRIAN: I didn’t want to sell this stuff. It’s only a job. I hate the Romans as much as anybody.

JUDITH: Are you sure?

BRIAN: Oh, dead sure. I hate the Romans already.

REG: Listen. If you really wanted to join the P.F.J., you’d have to really hate the Romans.

REG: Right.  You’re in.  Listen. The only people we hate more than the Romans are the fucking Judean People’s Front.

LORETTA: And the People’s Front of Judea.

LORETTA: Oh. I thought we were the Popular Front.

FRANCIS: Whatever happened to the Popular Front, Reg?

REG: He’s over there.