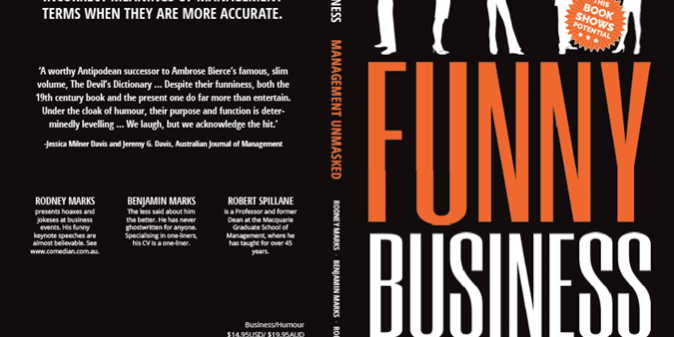 Wide-eyed and hopeful, my youngest daughter, Amanda, asked me last month: “how do you succeed in business?” Immediate, stock responses came to mind. Focus, work hard, meditate on the niche you can excel at, contemplate innovation, seek out mentors, and all the rest. After a moment’s reflection, I concluded that what really matters is to develop and maintain a sceptical mindset and a healthy sense of the absurd. Combined with a results-driven personality – plus experience – and you might just have what it takes.

What worldly wisdom could I bring to the question? What guides might assist? This essay is a meditation on the task.

I thought of the memorable author and LSE business academic Freek Vermeulen, whose book Business Exposed is well-researched; and a recent dictionary of definitions focused on business, Funny Business. Management Unmasked. They were the management books I gave my daughter.

Vermeulen shows that the world of business is not the rational, well-oiled, well-organised machine insiders often pretend it to be and as outsiders sometimes imagine. Hence the sub-title – “The Naked Truth About What Really Goes On in the World of Business.”

The author is doubter-in-chief of the management fads of modern business. With cheerful scepticism, Vermeulen shoots down many nostrums as well as applying a relentless focus on the need to get things done. Sometimes there is tension between contemplation and the doing. Even if business can never be all pontification, pondering about alternatives often helps.

In a different way, the three authors of Funny Business – comedian, Rodney Marks, his son and script writer Benjamin Marks, and Macquarie University management professor Bob Spillane – have had fun playing with business management concepts, words and clichés to produce smirk-inducing reactions. They are irreverent with the word-smithing – and the result is part play on words, comedy of the absurd, and droll explanation.

There is edge to the fun, of course. The latter book was blogged last year in episodic posts on Linkedin by Marks senior on behalf of his co-authors. Fortnightly, sometimes weekly, another batch of “definitions” were posted. I used to circulate selections to colleagues and friends. With encouragement from this writer and others, it was all turned into this book. Like the best of clowning, the aim is to generate smiles and chuckles and get the audience to think.

Vermeulen examines self-interest and contests a narrow view of agency theory, that we are all self-interested and need financial incentives to do things. This is only partly true and an impoverished summary of what happens: “People love to do stuff that strengthens their firms, fulfils them with pride,” he says. Tap into that, do it, and something very powerful is created. Business people should not be enslaved to a single-minded focus. Living good lives, respecting those around us, are compatible and necessary.

So what is business about?  Everyone seems to remember one pithy phrase by management guru Peter Drucker (1909-2005). Mine is: “effective leadership is not about making speeches or being liked; leadership is defined by results not attributes.” This is a demand for focus on outcomes more than inputs together with a careful, watchful alert to spin and noise. As for the clangour, we live in a world where ordinary words are leached of meaning, where a “clarification” or “reforecast” is a 180 degree turnaround or a completely different articulation of a position.

Thanks to Princeton University philosopher Harry G. Frankfurt we can call out the bullshitters. In the portentously titled On Bullshit (Princeton University Press, 2005) Frankfurt argues that whereas the liar knows but seeks to hide truth, the bullshitter is indifferent to the truth and rather only cares whether or not their listener is persuaded; they use every trick to achieve that aim.

As Vermeulen says, “we glorify top managers, print their pictures in newspapers and magazines, praise their decisiveness and vision, give them awards, and treat them like superstars. All they’re guilty of – the poor bastards – is believing the BS we write about them.”And what they and their spinmeisters proclaim.

The originality of the best of us can be lulled and dulled by ways of thinking and expression that are lazy and unreflective. Which is why considered, out-of-the-box, feet on the ground, reasoning is essential. Skilful evaluation of the implications of a course of action, including assessment of arguments or mere rhetorical claims is vital. Carrying that mindset might cause you to query claims like “industry trends justify…” or “we need to anticipate disruption…” which are license phrases for doing almost anything.“Where’s the evidence?” I say.

For every copy of Clayton Christiansen’s The Innovator’s Dilemma (1997), the book that pioneered the theory of disruption, you would hope that Justin Fox’s New Atlantic essay “The Disruption Myth” (2014) would be read. Christiansen proposed that a disruptive innovation is usually formed in a niche market that might initially appear unattractive or inconsequential to industry incumbents, but eventually the new product or idea completely redefines the industry. The age of the internet gave Christiansen’s ideas wings. Yet too much can be made of disruption, the business cliché of the moment. It is a good thought done to death. There is frequently, as Fox argues, disjuncture between all this talk of disruption and its actual practice. Clever businesses are not “meteor dinosaured” out of the park. They regularly adapt, transform, and change to meet new challenges.

My background, originally as a politics and philosophy student, might seem unusual in today’s business environment of skilled accountants, lawyers and other professionals. A range of specialist skills are essential for any commercial enterprise, but  a liberal arts education is a good starting point because it makes you curious. My training led me to appreciate why certain characters came to the views they held. It is a skill useful for business too to empathise with another perspective, understanding its internal logic as well as its emotional appeal.

It is valuable to read widely and across disciplines. One political writer relevant to management is the now underrated American philosopher James Burnham (1905-1987), whose mind and interests ranged broadly. So much so, that you might say that he was bound to get some things right at some point. He got a lot wrong in his life. Some of his positions and activities were weird. But a few of his writings excel and are suggestive of interesting lines of thinking. Before my first trip to the United States in 1981, I tried corresponding with him. Without response, wondering if I had the wrong address, I caught the train from New York to visit him in Greenwich, Connecticut, hoping he might want to have a conversation. I wondered if he had been in touch in his radical days with Australians like Professor John Anderson (1893-1962) of Sydney University. But the doorbell went unanswered.

What he broadly got right in his book The Managerial Revolution. What is Happening in the World (1941) was that Marxian theories of class warfare were a poor explainer of modern society, that the world was run by managers for and in their interests. Deeply pessimistic, Orwell criticised him in “Second Thoughts on James Burnham” (1946) as someone who saw trends as inexorable – as if never shaking off his earlier Marxist eschatology.

Even so the core of his thesis, of self-interested managers driving “their” companies or political parties or bureaucracies, is an idea worthy of update. Vermeulen’s research, including some sparkling essays on CEO behaviour in the Harvard Business Review, is apposite.

Seen in the light of Burnham’s thesis, the best kind of business and regulatory culture is one that champions innovation, entrepreneurship and is critical of self-interest and alert to the hogwash.

On self-interest and muddle, one area might suffice for critical appraisal. Covering the past few decades in particular, there has to be an interesting account written of the prevalence of remuneration “experts” driving increases in executive pay to stellar levels.  The academic literature on the pros and cons of performance incentives is mixed. Interestingly, most company directors have a story to tell about an absurd claim, complex language, inexplicable formulae and/or wildly inappropriate “bench-marking”. Vermeulen expresses doubts on bonuses and incentive schemes. I have been involved in businesses where as a board director or chairman I have either wiped them out or tried to strictly align them to shareholder value creation. The right balance turns on understanding the particular business, the implications, unintended and deliberate as well as potential conflicts inherent in such schemes. Sometimes I have seen executive remuneration reports so obscure that they might as well have been written in Aramaic.

Thinking of obfuscation prompts another flick through Funny Business. Cuttingly, a board of directors is defined as a “group of mainly men who went to the same private school last millennium, have shared values and world views, and can easily substitute for each other should golf or sailing or overseas holidays or divorce proceedings interfere with attendance at meetings.” Ouch. The art of buying-in is a “psychological process of requiring employees to agree with bosses.” You would hope not, but how much real dissent and devil’s advocacy is tolerated in some businesses? (As Warren Buffet once said “no one lemming gets a bad press”. Herd instincts are hard to corral or redirect.)

Some personal favourites include that for a quack – a “pseudo-expert whose ducks are not all in a row and who is not even a duck.” A trance is a “state induced by attending an AGM.” Plenty of readers can identify with that.

Tellingly, a business plan is a “hypothetical and theoretical, tentative and hesitant pathway to the future, measured in various time periods, although no-one has ever seen a five-year plan in its fifth year.” How true!

Some of the lines in both books remind me of a complaint I once heard from exiled Australian poet Harold Stewart (1916-1995) that too often people like “re-muddling things.” Addled words signal confused thinking. That is what the authors want us to reflect on.

What I like about Funny Business is the Marx’s Brothers-like humour – similar to the dialogue in the film Cocoanuts (1929) when Chico, after hearing an explanation of a property development grandiosely described as near a viaduct, pleads: but “vy [why] a duck?”

Not taking yourself too seriously and having a nose for the pompously self-important are Australian characteristics. Which is why what the authors (one Dutch, three Australians) have written appeal. Peppered through Vermeulen’s work are handy summaries on the latest research findings on the effectiveness and impact of certain business ideas. In Funny Business, some lines misfire or are over-wrought, but overall the work is wit on stilts. Together these publications can be picked up for illumination in countless settings.

Worried about an upcoming speech, searching for a Christmas present for the person with everything, needing a nugget to get the laughter rolling and everyone contemplating “what a smart, happy guy who deserves a bonus [leadership, perseverance, stay of execution, etc.]”? – the two books are for you.

In the process you might become more curious about concepts and learn to think. In business, Amanda, that is everything.

The Vermeulen and Marks et. al. books are available from all good book sellers and then some.

The article identified me as Executive Chairman of EG Funds Management.

How the article appeared in the newspaper: