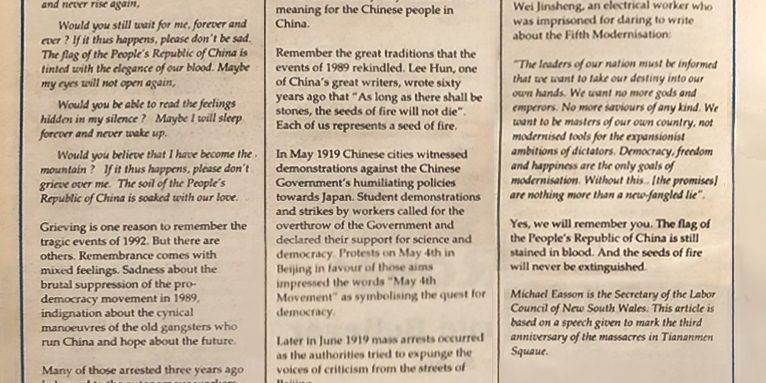 During the lonely nights and long days that Chinese students, workers and ordinary citizens gathered in Tiananmen Square, one of the most popular songs was this one:

Maybe I have to say goodbye and will never return.
Would you appreciate, would you understand?
Maybe I will fall down and never rise again,
Would you still wait for me, forever and ever?
If it thus happens, please don’t be sad.
The flag of the People’s Republic of China is tinted with the elegance of our blood. Maybe my eyes will not open again,
Would you be able to read the feelings hidden in my silence?
Maybe I will sleep forever and never wake up.
Would you believe that I have become the mountain?
If it thus happens, please don’t grieve over me.
The soil of the People’s Republic of China is soaked with our love.

Grieving is one reason to remember the tragic events in 1992. But there are others. Remembrance comes with mixed feelings: Sadness about the brutal suppression of the pro-democracy movement in 1989, indignation about the cynical manoeuvres of the old gangsters who run China, and hope about the future.

Many of those arrested three years ago belonged to the autonomous workers federations which were embryonic unions opposed to the “official” organisations. Significantly many more workers than students or intellectuals were imprisoned subsequent to the June 4th massacres. Some were executed. What the leaders of the “Socialist” Republic of China seem to hate most is the resistance and dangers posed by workers who expose the sham proletarian pretensions of the regime.

Back in 1989 many Australians were shocked when the Chinese authorities ordered that Tiananmen Square be cleared of demonstrators and that the popular movement for greater freedom be squashed. The blood of the innocents was split not only in Beijing but throughout China.

But why should we have been surprised? Alas, the story of 1989 is consistent with much of the history of China: corrupt rulers wiping away dissent through murderous violence. Our memory about the happenings of 1989 should commemorate not only the struggle of the brave students, workers and ordinary people who came to demonstrate for their freedom, but also the long history of struggle for democracy by the Chinese people.

Remember too the great traditions that the events of 1989 rekindled. Lu Xun, one of China’s great writers, wrote sixty years ago that: “As long as there shall be stones the seeds of fire will not die”. Each of us represents a seed of fire.

In May 1919 Chinese cities witnessed demonstrations against the Chinese government’s humiliating policies towards Japan. Student demonstrations and strikes by workers called for the overthrow of the government and declared their support for science and democracy. Protests on May 4th in Beijing in favour of those aims impressed the words “May 4th Movement” as symbolising the quest for democracy.

Later, in June 1919, mass arrests occurred as the authorities tried to expunge the voices of criticism from the streets of Beijing.

It is interesting that seventy years later, in 1989, Ba Jin, one of China’s most highly regarded writers and a member of the May Fourth generation, wrote a letter to the demonstrating students wherein he said:

Seventy years ago during the May Fourth Movement, a group of patriotic students demonstrated for the cause of science and democracy in our motherland. Seventy years have passed and we are still a backward country. l believe that the student’s demands are completely reasonable. What they are doing today is completing the task that we were unable to finish. They are the hope of China.

I am a sickly and decrepit old man, but I feel deeply encouraged by the example of these young people. I trust that all Chinese who are patriotic, upright and of good conscience will nurture and protect them. Ba Jin, from my sickbed.

So today, we recall the May Fourth Movement Spirit, we recall the moments of repression not only in 1989, but in 1986; in 1979 with the Democracy Wall campaign; the Tiananmen incident of 1976. And the words of Wei Jinsheng, still in prison – despite the smiling photographs the Chinese communists released in the last twenty-four hours. Wei Jinsheng, an electrical worker, was imprisoned for daring to write about the Fifth Modernisation:

The leaders of our nation must be informed that we want to take our destiny into our own hands. We want no more gods and emperors. No more saviours of any kind. We want to be masters of our own country, not modernised tools for the expansionist ambitions of dictators. Democracy, freedom and happiness are the only goals of modernisation. Without this… [the] promises are nothing more than a new-fangled lie.

Yes, we will remember you. The flag of the People’s Republic of China is still stained in blood.  And the seeds of fire will never be extinguished.

This article was based on a speech originally delivered to an audience in Town Hall Square, Sydney, to mark the third anniversary of the massacres in Tiananmen Square, Beijing, while the author was the Secretary of the Labor Council of New South Wales.

Referenced in the article is the idea of the Fifth Modernisation. This alludes to Deng Xiaoping’s dictums in 1977 about the Four Modernisations required to strengthen the fields of agriculture, industry, national defense, and science and technology in China.

What was missing was democracy, which Wei Jingsheng said was the “missing” Fifth Modernisation, as he articulated in an essay “The Fifth Modernisation” that he posted on the Democracy Wall in Beijing on 5 December 1978 and featured in human rights’ activists’ calligraphy posters around China.

For his troubles, convicted of “counter-revolutionary activities”, Jingsheng a total of 18 years between 1979 and 1997 in prison and was deported to the United States in 1998. I met him here a few times.