(2016) Speech at the Launch of Thomas Jones’ Life in Verse 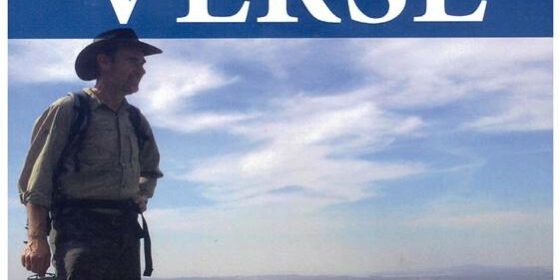 Thomas Jones – Tom, as I know him – is a serious poet who cares to communicate with an audience – to us here, especially.

As he put it in “Finding Voice”:

I’m ready now to share these lines
and let their voice be known as mine.

He has been practicing for many years. As a fellow member of the New Voices poetry group that meets monthly, not far from here, I have witnessed the progress of his journey.

All poets are performers but Tom more than most wants to be understood.

He stands in the tradition of James McAuley and Harold Stewart, whom as Ern Malley, their invented character that fooled the avant garde modernists at Angry Penguins journal, strove to show up nonsense writing.

Tom believes in communicating simply and beautifully – his best are in this book – about love, regret, faith, friendships, work, mortality, the thirteen headings covered in the book launched here. It takes courage to address those topics – and to stand before you – asking that you join in – listen, reflect on, speak the words.

Tom keeps asking our New Voices participants, as we read, gently critique, and discuss each other’s poems, “is this clear?”, “what do you mean?”

Tom looks for lucidity of poetic expression.  W.B. Yeats once wrote that poetry is like dancing, but dancing in light chains.

In his poem “The Art of Poetry” James McAuley’s line is:

Only the simplest forms can hold
A vast complexity.

Free verse and loose thinking can get you into a muddle. As Harold Stewart once told me, the worse writers bring no enlightenment, they re-muddle things. It is hard to dance to that. There is something to be said for lore and order.

Far from this stern, rigid form-master image that I so far might have conveyed, I might need to pause: It is Tom we are talking about, a guy who owns the expression “always with a glint of happy mischief in his eye”.

He might have titled one of his poems “Is Rhyme a Crime?”, perhaps the closest he comes to belligerent orthodoxy, but he sees whimsy in that question.

Good poets carefully weigh and agonise over each word, paring their composition to a sparkle of crystal clarity. When you get one right, no matter how exasperating the effort, it is an exulting achievement.

Dip into this book and discover why he is entitled to enjoy the result.

Poets employ words with remarkable economy, saying volumes in the briefest of words that invoke a variety of symphonic yet aligned meanings, allusions, and echoes, so that one line is like the plucking of a string, the original note sometimes resounding slowly into stillness.

There is music with what we hear with Tom. And moments of deepest silence.

Of all places, I recently read a piece on Linkedin by the American-Australian investment banker Harrison Young about an address he gave to graduating economic and finance students at Monash University.

To an assembled phalanx of future commercial rulers of the universe, he urged “Read poetry.”

Benefit number one: reading poetry requires a person to pause and attend. Most poems have to be read slowly. Many have to be read through more than once. This is a useful discipline. Slowing down allows you to savour sounds, admire word choices, contemplate ambiguities.

He went on, carefully enumerating the merits of his case, as you expect he might before that surprised lot.

Regular contact with poems, and the metaphors they employ, is a way of taking your imagination to the gym twice a week. It helps you recognise how much of existence is several things at once.  It demonstrates that reality has layers.

I see “Talk with Me”, “The Brawling Bitches Derby Club”, “Doctor’s Tricks”, “Used”, “Sweet Waking”, “Lovely in Lycra”, “Annual Charity Dinner”, “Magpie Season”, “Holiday Dreams”, “Summer Barbecue”, “Off the Wagon” as among Tom’s best. You will find your own. Perhaps, on another read, you might have other picks.

In the poem “When the Music Stops” Tom senses that at this stage of life you might as well do what you want to do and be good at it. He writes:

So how can I now make the best
Of this, my final chance?
One option is to nurse regret
The other is to dance.

Today we see that dance in Tom’s poetry.