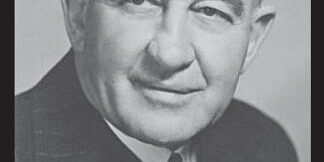 This 73-page booklet by David Clune, one of a series commissioned and edited by Scott Prasser for the Connor Court Australian political biographical monographs, provides an excellent overview of the life of Sir William McKell KC KSG (1891-1985; NSW Labor Leader, 1939-47; Premier of NSW, 1941-47; Governor-General of Australia, 1947-53) who in 1939 inherited the leadership of a party in total disarray and then fashioned a winning combination and style known ever since as the McKell Model.

McKell’s legacy includes “an enduring consciousness in the New South Wales Labor Party’s parliamentary and extra-parliamentary wings of the importance of compromise, negotiation and co-operation in the interest of electoral success.” Electoral success it was: Between 1901 to 1941, NSW Labor governed for 12-years; for the rest of the century for 41-years or 52 of the 70 years after McKell won in 1941 to NSW Labor’s electoral annihilation in 2011.

Clune says: “McKell was a pragmatist with a purpose.” What this means and the positioning of that claim against rival theories is itself worth a book.

The historian Stuart Macintyre (1947-2021) in his address to the ALP National Conference in 1994 on ‘Who Are the True Believers?’ was critical of the pragmatist, ameliorating tradition of NSW Labor: “We can argue over ends and means, but without some larger awareness of the cause in whose name the compromises are made, without the energy of doctrinal zeal, the cause withers. Politics without principles becomes a mere exercise in the pursuit of power.”

This is the familiar argument of the doctrinaire left. At the time Macintyre presented his argument, he had broken free of Althusserian High Marxism, quit the quickly vanishing Communist Party of Australia, and had joined the ALP.

Clune’s account is a brief rebuttal of the Marxist critique that “reformism” is necessarily a story of mediocre compromises or politics without principle. Clune presents an exposition and discussion of McKell’s experiences and thinking, including McKell’s detailed plans for governing.

Clune’s assessment invites attention to McKell’s efforts to implement the Labor Program, the policy positions put to the electorate in 1941 and 1944, his reforming zeal and flaws. Clune says: “McKell hoped to create an egalitarian society based on planning, conservation, scientific progress, and rational decision-making. Some of this would now be characterised as a rather naïve belief in the “perfectibility of man”. It is also suggestive of the exaggerated respect of the autodidact for experts.”

Key to understanding McKell is that he emerged through a quarter of a century of NSW Labor turmoil, splits, expulsions, and confusion.

As an apprentice boilermaker, he stood up for better conditions, became active in the Boilermakers’ Union, attended Labor Council meetings at Trades Hall, joined WEA classes, supported the radical “industrial wing” of the ALP, was elected in 1916 to the NSW executive of the ALP, frustrated by the “give and take” politics of the NSW Labor government first elected in 1913.

McKell presented in parliament as a thoughtful, conscientious, and well-prepared MP. He urged justice for the ‘IWW twelve’. McKell sought to educate himself to be more effective. Vere Gordon Childe (1892-1957), the Labor intellectual and private secretary to John Storey (1869-1921; NSW Premier, 1920-21) coached McKell in logic, psychology, and Latin enabling him to pass the Barristers’ Admission Board exams in 1925.

Storey appointed McKell Assistant Minister and then Minister for Justice, positions held 1920-22. In 1925, under Jack Lang (1876-1975; Premier, 1925-27 & 1930-32) McKell was again Minister of Justice as well as Assistant Colonial Treasurer to the Premier. In May 1927, as the erratic, suspicious Lang dropped alleged detractors, McKell survived in the Cabinet, but was purged in June.

In 1930 when Lang returned to office, McKell briefly became Minister for Local Government and then, once more, Minister of Justice.

Lang’s demise came after heavy election defeats (in the three elections held between 1932 and 1938), and after the Bob Heffron (1890-1978; NSW Premier, 1959-64) led breakaway Industrial Labor Party won by-elections in Waverley and Hurstville. The Federal party persuaded the warring factions and sub-parties to reunite. On 5 September 1939 McKell was elected NSW Labor Leader.

McKell quickly set out to modernise and invigorate his party. Famously, McKell paid particular attention to finding Labor candidates for many marginal, rural seats. Clune quotes an article in the Sydney Morning Herald which described those candidates as “practical farmers, shire councillors, stock breeders and men from local families of long standing.”

McKell’s other instinct was to package Labor as united, worthy of support. In a masterstroke, NSW Labor called itself Official Labor to legitimise their credentials as the mainstream party. In contrast, Lang Labor remnants, and the Hughes-Evans (communist aligned) Labor breakaway were rendered illegitimate.

McKell admired Roosevelt’s New Deal and he talked about a master plan of co-ordinated reforms.

Coming into the 1941 election, Labor only held 30 of 90 seats. McKell promised to abolish payroll tax. “Caution, rationality, and pragmatism were the hallmarks of McKell’s approach to government” both in opposition and government. He argued that in NSW there was an urgent need to change horses from the do-nothing, incompetent administration of conservative Premier Mair (1889-1969; Premier, 1939-41). McKell easily won election in 1941 and 1944, beginning and consolidating an era of NSW Labor rule. McKell was the first NSW Labor Premier to serve a second consecutive term.

A State’s righter, McKell was marginalised within Labor as he opposed making permanent the war-time transfer of income tax powers to the Commonwealth. He saw that the power to tax was the power to govern.

His governing style proved instructive: “McKell insisted that all submissions for Cabinet be circulated well in advance and, with the assistance of [Wallace] Wurth, evaluated them carefully. The Budget Branch of Treasury, which McKell had strengthened by the appointment of a group of talented public servants, carefully scrutinised the financial aspects of Cabinet submissions. As a result, the Premier sometimes knew more about the submission than the minister proposing it.” Wurth (1896-1960), a member of the NSW Public Service Board (from 1936; Chair, 1939-60), was one of McKell’s most trusted bureaucrat confreres. But it was not all control from the centre. McKell wanted his Ministers to run their portfolios and to take major decisions, policy initiatives and major spending proposals for example, to Cabinet based on well-argued submissions. McKell wanted to raise standards of governance, in contrast to the Lang years.

Though, in contrast to those successors, Clune notes that McKell, “a vigorous but not vindictive opponent who had friends on both sides of the chamber” never gagged or guillotined debate in the NSW parliament.

The McKell Model refers to both 1) his style of governing, as just described and 2) his approach to balancing the various interests within the labour movement.

On the latter, Reg Downing (1904-1994; NSW MLC from 1940; Leader of the Labor Party in the Legislative Council, 1941-72), played a crucial role as McKell’s representative on the NSW ALP Executive, his emissary and conciliator of claims, disputes, and issues between the three parts of Labor’s trinity – the Parliamentary Leadership, the unions (led by the Labor Council of NSW), and the ALP party office and political machine. In the years Downing was formative and prominent, the morass of Langism was a fresh memory. Many reforms, including the legislation in 1944 for an extra week of annual leave were thereby canvassed and decided.

Interestingly, in 2008 there was debate about how applicable the McKell experience and lessons on party governance was. The McKell Model was meant to ensure a temperate balance between the various interests. This was forgotten. Ironically in 2008, when Premier Morris Iemma (1961- ; Premier, 2005-08) went down in flames on electricity privatisation, the party machine and unions wanting to remove the Labor Leader, all sides invoked McKell’s legacy. There was no Reg Downing at hand. Clune is insightful about the “wounded” McKell who “…was temperamentally unable to shrug off criticism he regarded as unfair.” Sometimes, Clune admits, McKell saw himself as the prophet who knew best; arguably, he mostly did.

In February 1946, McKell announced he would not contest the next election (due in 1947) and he resigned a year later for vice regal duties, staying on as Premier to unsuccessfully support Heffron as his successor.

Clune ably draws on his lifetime’s research of NSW and NSW Labor politics and modestly credits other scholars, particularly Chris Cunneen’s 2001 McKell biography for insights and judgement, including why McKell’s reputation waned before revival in the late 1970s onwards. On pp. 58-61 a useful summation of McKell’s achievements, governing style, and legacy is set out. Clune writes clearly and well about one of the most influential and significant of all Australian State Premiers.

The photos accompanying this article were not included on publication (as it is not that kind of journal.)

The editor suggested footnoting in the review, and they were included on publication.