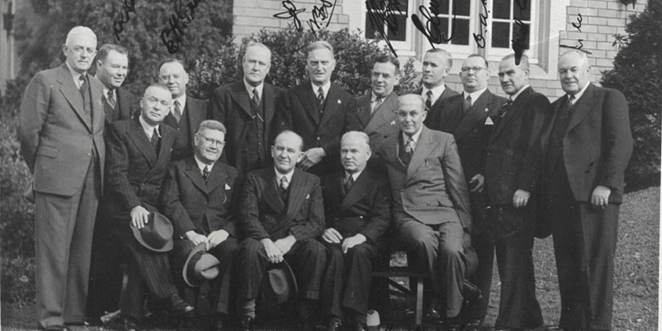 The 1930s was a decade of ALP splits and rancorous factional warfare, which made the ALP unelectable. In the 1930s Labor lost three NSW State elections and helped lose the three Federal elections held in that decade. In 1939 Conference returned to the parliamentary party the right to elect its leader. McKell defeated Lang for the leadership. The Centre Unity faction traces its origin to 1939, the year McKell won control. At the time, the Left was strong (including pro-communists) and Labor had a reputation for being poor economic managers.

McKell’s approach to developing policy was to appeal to a wide section of the party, including the sensible Left, consult with the unions and to govern. The days of strident State conference ‘directions’ to the party were over. The Labor Right, which formed the ALP Industrial Groups in NSW in 1941 under the aegis of the then Labor Council assistant secretary, Jim Kenny, was always a different beast to the Groups in Victoria, which were overtly more Catholic. The Labor Right had the aim of getting Labor into office, keeping the Liberals out and the Left down. The unions wanted their slice of the cake but left the government in charge of the kitchen.

McKell’s leadership coincided with the formation of a coalition between the Parliamentary Labor Party, the Labor Council of NSW and the ALP Head Office to keep the show on the road. The personalities involved were crucial. Notably, during the ALP split in 1955-57, that coalition – including the moderates in charge of the parliamentary party, unions and the ALP office – kept Labor in power. Labor continued to govern at the state level to 1965. NSW Labor acted as an effective machine, whereas, throughout the rest of the country, the split was crippling.

This strong foundation of Labor in NSW provided a base for Whitlam (who narrowly avoided expulsion from the party in 1966 on the issue of state aid) and later for the Hawke and Keating governments.

The Iemma government’s attempt to deal with energy reform can be seen in the McKell context. McKell recognised that the party in government needs to do the right thing, to govern for the national interest, not just for sectional favour or stubborn, ideological bent. He also thought that you could govern well and do so in a pro-Labor way.

The original electricity proposal was itself a compromise – selling retailers with tied, long term leases of generators. The Owen report showed how this reform would avoid government investment in risky, expanded power generation. Full privatisation, including distribution, where the bulk of the workforce works in electricity, was not contemplated under Premier Iemma. In negotiations with the unions, five-year employment guarantees were offered, once off ‘staying on’ payments proposed for the remaining workforce and hefty redundancy conditions added to the package for those who wanted to go. The government proposed reinvesting the money from electricity privatisation into other infrastructure, including public transport.

Throughout the electricity negotiations the government was pilloried as anti-Labor, sellouts, “as bad as Howard”, “intractable”, etc.  At the ALP Conference this year, the ALP Party officers as well as the Labor Council leadership voted against the government’s proposal. In the history of the NSW Right, this was unprecedented. The premier and key ministers were threatened with expulsion. The Left joined the fracas with NSW ALP Assistant Secretary Luke Foley speaking to ALP Left parliamentary meetings promising to protect anyone who crossed the floor to vote against the government’s proposals. In fairness to Foley, the Party President, Bernie Riordan, promised the same thing to several Right MPs.

This was a return to the shambles of the Jack Lang era.

Was the bringing down of Iemma the end of the McKell model? Several viewpoints, both claiming the McKell mantra have sought to explain these events. Former Wran government minister and intellectual Rodney Cavalier, the Editor of this Newsletter, has claimed in these pages that the McKell model broke down because the parliamentary party, led by Iemma, defied the Conference. This turns the McKell model on its head.

Can there be much doubt that if Bill McKell were alive his signature would have been backing Premier Iemma in the flurry of statement and counter statement in May? There’s an insight in what Michael Egan wrote in The Australian on 9 May, 2008 that Robbo and Riordan “must understand that you can have Labor conferences dictating what Labor parliamentarians may and may not do or you can have Labor governments. But history proves you cannot have both.” That, however, is an unsatisfactory viewpoint. Party conferences and processes should be meaningful to what Labor does in government.

The alternative view, effectively championed by former PM Keating, Premiers Wran, Carr and Unsworth and several past Labor Council secretaries – effectively all of the old moderate party leadership – states that the spirit of compromise, hitherto apparent in NSW Labor, went missing. This is an astonishing breakdown of the McKell model.

Not in 50 years has ALP Head Office fought to destabilise a government. Despite some colourful scraps of the past between political and industrial Labor, recent events are unheard of.

Not since 1916 has the Labor Council, now called Unions NSW, threatened regicide against a NSW Labor premier. The party officers’ offer to protect maverick MPs effectively deprived the premier of a parliamentary majority. Consequently, the government floundered and looked weak.

When the NSW Liberals squibbed the test to support privatisation, real energy reform bit the dust. Soon after, so too did the premier and key ministers.

The reasons for the breakdown of the McKell model are complex. The people at the top are key. The personalities involved all contributed to the mess. That’s the nub of the matter. Contrary to fashionable opinion in Labor circles, I blame Iemma for Costa. A better leader would have made use of his talents and curbed his weaknesses. Iemma was a decent man, a good minister, but out of his depth as premier. Costa had ideas aplenty. Maybe a lacerating tongue, but I am certain that the caricature of Costa is overdone.

When at a Cabinet meeting before the Fall, a very senior current minister asked whether we should tell the ratings agencies to “stick it”, Costa should have been more polite. No doubt the Treasurer of NSW was ‘out of line’ when he pointed out that such mindless talk must be like an echo of Cabinet meetings in Zimbabwe. No doubt Treasurer Costa rudely pointed out that the government of NSW asks for and pays the ratings agencies to grade our debt. Surely, however, the essence of such strictures had their place.

There were some good arguments for Iemma’s departure. My view from afar was that the Iemma government was rudderless and seasick. But they didn’t deserve the sword over tackling something so obviously sensible as a bit of electricity reform. All party members should regret the manner of lemma’s execution.

Ironically, when the government announced in early November 2008 the sale of electricity retailers, no one pointed out that this technically breached the May 2008 conference resolutions. It seemed good enough that Iemma and Costa were not doing it. Surely this highlights that personalities were key.

The tragedy for NSW Labor is that it is now in unchartered waters, without the McKell compass, without the sure sails and structures that survived many storms of the past. It’s called drifting. It shows.

There’s a way forward: that way begins with remembering our history. For encouraging an interest in history, however much we may disagree, I commend the Southern Highlands Branch Newsletter.

The significance of this journal as a lively, obscure forum is sadly obvious. No one is much interested in policy debate anymore.

Rodney Cavalier asked me to write my thoughts on the McKell model. He replied to my arguments in the journal and further outlined his thinking in his book Power Crisis: the Self-Destruction of a State Labor Party, Cambridge University Press, Cambridge, 2010. We disagree on many of the issues.

The statement referred to in the article was authored by Neville Wran and issued by him and other former party leaders in May 2008. It failed to stop the looming demise of Premier Iemma.