(1993) Jobs the Criteria for Judgment. Optimism Replaced by More Subdued Estimate of Future 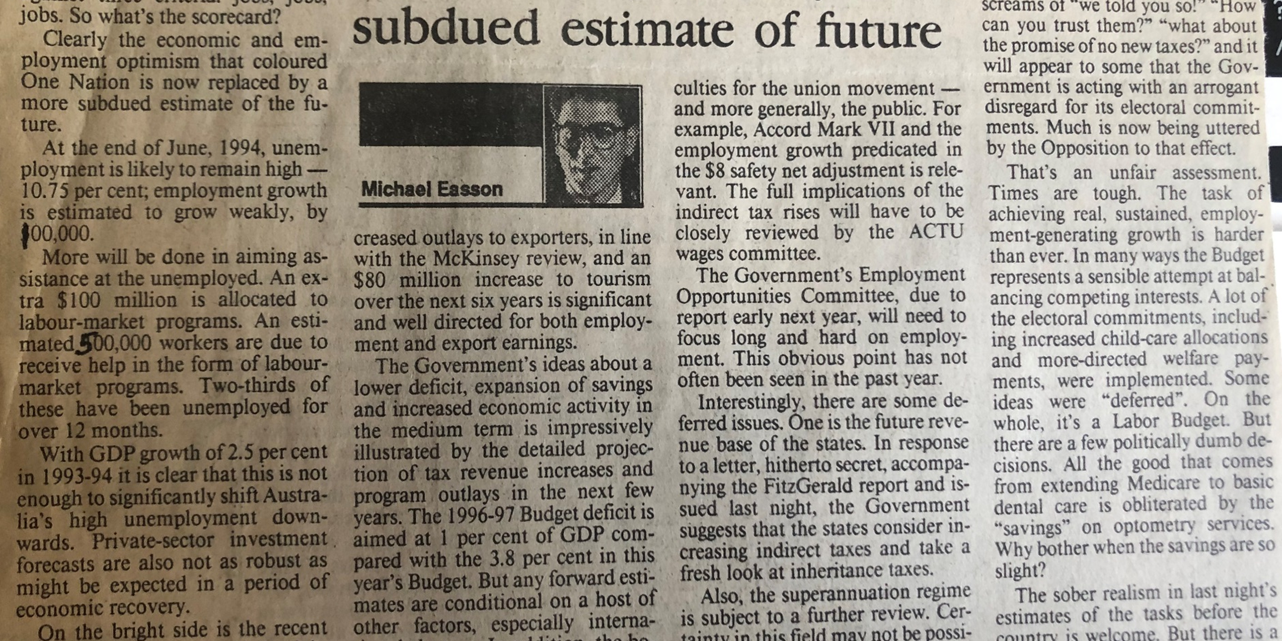 The Treasurer knew that last night’s Budget would be judged against three criteria: jobs, jobs, jobs. So what’s the scorecard?

Clearly the economic and employment optimism that coloured One Nation is now replaced by a more subdued estimate of the future.

More will be done in aiming assistance at the unemployed. An extra $100 million is allocated to labour-market programs. An estimated 100,000 workers are due to receive help in the form of labour market programs. Two-thirds of these have been unemployed for over 12 months.

With GDP growth of 2.5 per cent in 1993-94 it is clear that this is not enough to significantly shift Australia’s high unemployment downwards. Private-sector investment forecasts are also not as robust as might be expected in a period of economic recovery.

On the bright side is the recent increase of exports, especially elaborately transformed manufactures. Even so, employment growth in this important sector is not as impressive as rhetoric suggests.

Also worth noting are the increased outlays to exporters, in line with the McKinsey review, and an $80 million increase to tourism over the next six years is significant and well directed for both employment and export earnings.

The government’s ideas about a lower deficit, expansion of savings and increased economic activity in the medium term is impressively illustrated by the detailed projection of tax revenue increases and program outlays in the next few years. The 1996-97 Budget deficit is aimed at 1 per cent of GDP compared with the 3.8 per cent in this year’s Budget. But any forward estimates are conditional on a host of other factors, especially international changes. In addition, the bonanza of the Reserve Bank’s transfer of revenue in 1993-94 of more than $3 billion is unlikely to be repeated in future years.

The Budget implies some difficulties for the union movement – and more generally, the public. For example, Accord Mark VII and the employment growth predicated in the $8 safety net adjustment is relevant. The full implications of the indirect tax rises will have to be closely reviewed by the ACTU wages committee.

The government’s Employment Opportunities Committee, due to report early next year, will need to focus long and hard on employment. This obvious point has not often been seen in the past year.

Interestingly, there are some deferred issues. One is the future revenue base of the states. In response to a letter, hitherto secret, accompanying the FitzGerald report and issued last night, the government suggests that the states consider increasing indirect taxes and take a fresh look at inheritance taxes.

Also, the superannuation regime is subject to a further review. Certainty in this field may not be possible until the June 1994 Budget.

Although it is common to assume that politicians are cynical, manipulative and shameless betrayers of the truth, this idea is at best a primitive view. Last night’s federal Budget will be met with screams of ‘we told you so!’ ‘How can you trust them?’ ‘what about the promise of no new taxes?’ and it will appear to some that the government is acting with an arrogant disregard for its electoral commitments. Much is now being uttered by the Opposition to that effect.

That is an unfair assessment.

Times are tough. The task of achieving real, sustained, employment-generating growth is harder than ever.  In many ways the Budget represents a sensible attempt at balancing competing interests. A lot of the electoral commitments, including increased child-care allocations and more-directed welfare payments, were implemented. Some ideas were ‘deferred’. On the whole, it’s a Labor Budget. But there are a few politically dumb decisions. All the good that comes from extending Medicare to basic dental care is obliterated by the ‘savings’ on optometry services. Why bother when the savings are so slight? The sober realism in last night’s estimates of the tasks before the country is welcome. But there is a real issue of whether the government will get the politics right.