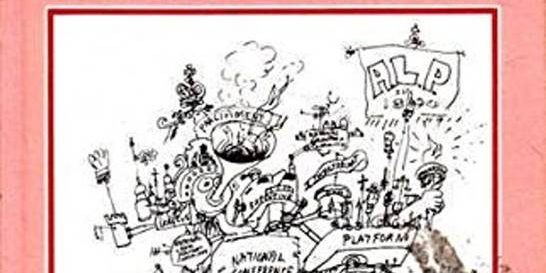 The chief virtue of Machine Politics is its revelations concerning hitherto difficult to obtain information on factions within the ALP and on trade union affiliations and party membership in each of the state and territorial branches.

Parkin and Warhurst comment in their preface, concerning the book’s contributors, that “while a number of them have had, and continue to have, varying degrees of involvement in the organisation about which they write, all of them attempt to provide information and evaluation in a frank and fair manner. There can be no excuse in this exercise for partisanship nor for accounts slanted for or against particular factions, although the chapters do not avoid making judgements.”

This by and large, is a fair assessment of the various contributions with the exception of Richard Davis’ essay on the Tasmanian ALP, the weakest in the book. Davis gives himself away when he writes:

There is, in fact, reason to accept the claim of John Green, a prominent member, that the Tasmanian ‘Broad’ (Left) is ‘an accommodating Left’. The media and, apparently, some Federal party officials have argued strongly to the contrary. They depict the Tasmanian Broad as criminally irresponsible ‘pro-Communist’ lemmings hastening to their own destruction.

This is as useful an analysis as the Queensland Old Guard’s description of all their opponents as ‘Groupers’. The case against the leadership of the Tasmanian ALP machine has more to do with incompetence, lack of community support, and factional fanaticism.

James Jupp’s study of the Victorian Branch, which begins with the judicious observation that “the outstanding characteristic of the Victorian ALP until 1982 was its lack of political success”, is the best chapter in the book. Jupp considers that the main reasons for the Victorian ALP’s failures between 1949 to 1970 rests with obsessions with ideological problems which were largely irrelevant or secondary elsewhere in Australia.

The Socialist Left-dominated Victorian ALP, after the 1954-1955 split and before Federal intervention in 1971, is an example of a political machine transfixed with consolidating factional ‘gains’ at the expense of electoral advantage.

Tom Wheelwright’s description of the NSW ALP is an excellent summary of the fluctuating fortunes of the Officers Group (now transformed into Centre Unity) and the Steering Committee (the left wing) from the early 1970s to date.

Like Queensland (with Egerton) and Western Australia, the NSW ALP can largely be interpreted through the personality of a single individual, John Patrick Ducker. But Ducker’s personality, though dominant in his own faction and the NSW ALP, was different from Egerton’s and Chamberlain’s. Egerton’s ruthless and unsophisticated dominance of the Trades Hall Old Guard group and the Queensland ALP left the party in a terrible electoral position and, following his departure, exposed his successors as lacking in political nous and tolerance. Wayne Swan’s essay on Queensland is a depressing catalogue of ‘the party Jack built’; Swan also discusses the success of reformers to defeat the Old Guard and the Socialist Left, thereby establishing the opportunity for a moderate political grouping to emerge as the dominant factor in Queensland ALP politics.

Doug Mitchell’s account of the Western Australian ALP is largely the story of Joe Chamberlain’s grip on the ALP machine, which only passed, after twenty-five years as State Secretary, with his retirement in 1974.

Wheelwright’s evaluation of NSW ALP politics describes Ducker’s rebuilding of moderate forces which, during the twilight years of Colbourne’s and Oliver’s leadership in the late 60s, were losing ground to the left. Thanks to Ducker, Federal intervention in NSW in 1971 was limited and less traumatic than what occurred in Victoria. The Socialist Left leadership of Crawford and Hartley were determined to maintain suzerainty over Victorian ALP politics without significant participation or sharing of power with more moderate elements. Consequently intervention in Victoria destroyed the careers of Hartley and Crawford, at least for a short period.

Stokes on the South Australian ALP provides a useful description of the decline of consensus politics; Juddery is mercifully brief on the ACT ALP; and Jaensch is crisp and thorough on NT politics.

Other essays by Parkin (a no frills description of the theory of ‘machine politics’), Lloyd (a brief account of the Federal ALP structure), and Warhurst (a summing up of the complexities which make up the ALP) complete the book.

Overall the book ensures that discussion on the ALP and factions within the party is considerably better informed.

The Socialist Left (whether pure and simple as in Victoria or in its Steering Committee guise in NSW) is seen in perspective: divided, numerically weak amongst ALP supporters, but influential due to superior organisation, and lacking in any coherent drive.

Significantly Clem Lloyd’s comment that “there is now no strong countervailing faction to the Left within the caucus. The traditional Right, the force within the ALP the early 1920s to the 1950s has lost coherent effectiveness over the 20 years” already shows every sign of becoming out of date.

For too long Centre Unity and ALP moderates generally have been silent on our organisation and personalities. There is now emerging a moderate ‘centre’ grouping in every State and within the Federal Caucus. A faction proud of its historical role in the party and committed radical revision of society may be the legacy Hawke government to the ALP.