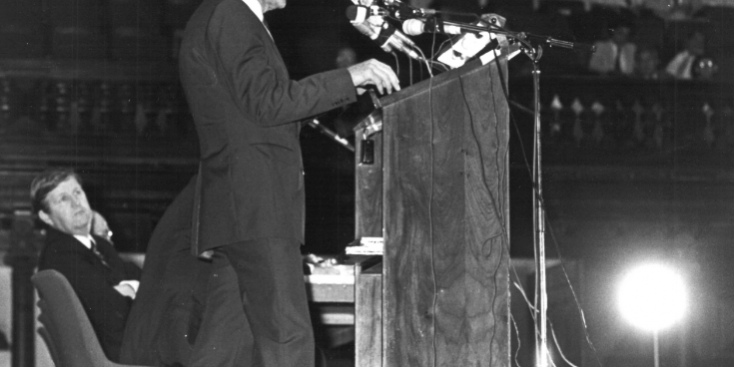 Bob Carr wrote an article for the Bulletin on this paper.  This is what he wrote:

Hawke’s supporters are as far as ever from winning control of the Victorian ALP. This emerges from an analysis of the likely effect of the affiliation of Right-wing unions to the Victorian party and is important, given Hawke’s need to expand his base if he is to become Labor leader. It is also relevant to the kind of government that will emerge in Victoria if John Cain wins next year’s elections. The 15-page analysis has been prepared by a senior member of the NSW Centre-Unity faction of the ALP, Michael Easson.  It is circulating in the party under the heading: “Can the Socialist Left be beaten in Victoria?”

Easson, the education officer of the Labor Council of NSW, argues that affiliation of Right-wing unions to the Victorian ALP discussed for over a year as a means of swinging the party to moderates will not succeed in destroying Socialist Left control. Six unions are considering affiliation.  They are the Australasian Transport port Officers’ Federation, the Amalgamated Society of Carpenters and Joiners, the Federated Clerks’ Union, the Federated Ironworkers’ Association, the Hospital Employees’ Federation No 1 branch and the Shop Distributive and Allied Employees’ Association.  All but the Transport Officers’ were affiliated to the party before fore the 1955 split. All are affiliated to the ALP in at least one other State. While the Federated Clerks’ Union, regarded as a stronghold of National Civic Council influence, would probably face strong opposition within the party, the other unions with a combined membership of 77,500 could conceivably be in the fold by the middle of next year.  As affiliates they would be entitled to representation at the Victorian ALP Conference.

Held in June of each year, the conference elects party officers, the party administrative committee, delegates to the national ALP executive and conference and the central electoral college responsible (with local ALP members) for the pre-selection of candidates. There are three factions operating in the Victorian party; the Hawke-aligned Labor Unity faction, the Socialist Left and the Independents (who normally trade their support with the Socialist Left). According to recent votes at Victorian conferences Easson puts Labor Unity and Socialist Left support at 43.5 percent each and the Independents at 13 percent. He writes: “The combined vote of the Socialist Left and the Independents who are embraced in an alliance to control the Victorian ALP fluctuates between 58.37 and 56.50 percent.” If the five unions affiliate they would raise the affiliated union membership of the Victorian ALP to 391,487. This would alter the quota that determines union representation to the conference, with Easson’s estimate giving the five new unions 53 delegates. (26 to the SDA, 10 to the FIA, 10 to the Hospital Employees’, five to the ASCJ and two to the Transport Officers’.)

Writes Easson: “The combined vote of the new affiliates and the Labor Unity faction would be 232 delegates out of 464 one short of a majority.”  While this would be a striking gain for the pro-Hawke forces, Easson argues even this advance is likely to be illusory: “First, there is no guarantee that all of the moderate unions will decide to affiliate to the Victorian ALP.

Many of the officials of these unions are not convinced that their affiliation will be part of a strong anti-Socialist Left drive by Labor Unity faction.” Also, the Socialist Left unions may counter the new affiliates by simply boosting the numbers on which they affiliate. It follows, Easson concludes, that defeating the Socialist Left and its allies in the Victorian ALP requires more than new affiliates: it needs a membership drive to change the complexion of ALP branches (tried by the Hawke forces with limited success last year) and changes in the control of Socialist Left voting unions. Several unions the Australian Railways Union, the Electrical Trades, Food Preservers, Furnishing Trades, for example are Socialist Left-aligned in Victoria but Centre Unity aligned in NSW. Such unions represent 14.59 percent of the delegates to the Victorian ALP conference.  Of course, new affiliates could force a new alignment of the Victorian factions. Leaders of the Independent group such as John Button and John Cain, interested in their own survival, could move into alliance with a reinforced moderate grouping. And if the ALP wins the next State elections all its internal politics could enter a period of flux: power is a wonderful elixir.

After years of skirmishing, in March 1985, the ALP national executive voted that four right-wing unions should be granted affiliation with the Victorian branch of the party, thereby thwarting moves by those opposed In Victoria, as they saw matters, to welcoming the DLP elements back into the party. The far Left threw tomatoes at Jim Maher, Michael O’Sullivan, and other unionists when they took their seats at the April 1985 Victorian ALP conference.  There was more than a touch of ‘give me death rather than dishonour’ in the opposition of many elements in the Left of Victorian Labor.